The Deeper Genome: Why There Is More to the Human Genome than Meets the Eye 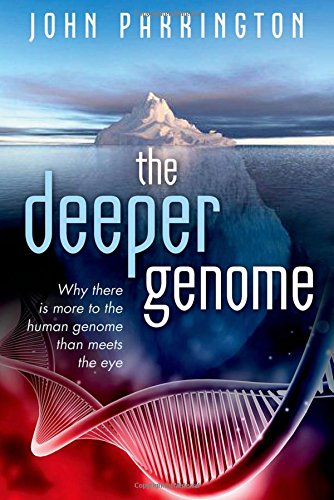 “a compelling book that will enrich your knowledge of genetics and its potential.”

A decade after the Human Genome project, what use can be found for sequencing our DNA, the molecules that are the building blocks of life? Is it a lot of hype over something with little relevance?

Dr. John Parrington, a molecular pharmacology lecturer at Oxford University, seeks to forge a “middle way” between the doubters and those who believe studying the genome is the “greatest invention since the wheel.”

The book tests the reductionist theory that breaking down biology into its component molecules can explain the mysteries of how we are made. It also explores the concept of epigenetics, where cellular changes are controlled by factors other than DNA, such as the environment.

We learn about the scientific method, from knockout mice, where copies of a particular missing gene are studied for their effects, to chromosome painting, the study of diseases caused by genes breaking off.

The book’s conversational style does much to make this complex subject accessible, with short chapters preventing us from getting bogged down in excessive detail. Key figures from genetic history enhance the experience.

Lesser-known but important characters also make an appearance, such as the researcher Flemming, who with the aid of dyes discovered chromosomes in the 19th century, naming them after the Greek for “coloured bodies.”

Dr. Parrington takes us through Watson and Crick’s remarkable discovery of DNA, deoxyribonucleic acid, with insights into the men’s personalities and backgrounds. We discover the subsequent recognition of the enzyme DNA polymerase and, later, DNA’s relationship to making proteins.

We meet Monod, a multi-talented prodigy who observed the growth of bacteria in two different sugars, glucose and lactose. Together with his colleague Jacob, this eventually lead to the theories of genes being turned ‘on’ or ‘off’ during growth. As the book points out, “In science, as in life, sometimes it’s the little things that count.”

Although the language gets quite technical at times, it is interspersed with quotes from scientists and others, as well as helpful diagrams of molecular structures and concepts.

The book explores the potential of genetic research. For instance, older mice with memory loss are joined to a younger mouse so that they share the same blood system. In mice, the memory loss can be reversed, but Dr. Parrington is cautious when it comes to applying the same principle to humans.

Differences between humans and other organisms are discussed. Bacteria, described as the supermen of evolution, get a special mention, “Whether measured by cell number or sheer biomass, bacteria outperform every other life form on our planet.”

For some of the book, prior knowledge of genetics is helpful due to the sheer number of technical terms and the complexity of the diagrams. However, the story clearly unfolds through scientific discovery and juxtaposed theories.

One of the key questions in the book is: how much of our DNA is of use to us? It has been found that only 2% of the genome codes for proteins, and Professor Dawkins’ view is that, “the greater part of the genome might as well not be there.”

Others, however, disagree, including Birney, spokesperson for the ENCODE (ENCylcopedia of DNA Elements) project, which aims to look at all the functional parts of the genome, “We don’t really have any large chunks of redundant DNA.”

The role of RNA, or ribonucleic acid, is investigated, with discoveries that it can act as an enzyme to catalyse biological reactions. RNA interference, where genes can be turned off by non-coding RNA in the fight against viruses, is an under-developed field in gene therapy that, “has been slow to be realized.”

The book explains the importance of recognizing the 3-dimensional structure of DNA, particularly when studying diseases such as thalassaemia, premature ageing disorders and cancer. It also examines the concept of “jumping genes,” which change over time to allow the organism to adapt.

Returning to epigenetics, it describes how post-war rationing and Swedish famines affected not only the weight of the children but also the grandchildren of those studied. This took place due to additions to the chemical structure of both DNA and histones, proteins found attached to DNA in the nucleus.

Parrington even goes as far as considering the question, “What makes us human?”, discussing our ability to evolve, our capacity for language and how this relates to our genetic make-up.

Finally, considering genetic treatments, it evaluates the role of the Human Genome Project in curing some of the diseases mentioned. According to Lander, a biomedical research director, it is likely to take some time, “Going from the germ theory of disease to antibiotics took 60 years. We might beat that.”

This is a compelling book that will enrich your knowledge of genetics and its potential. For those seeking to better understand the world we live in, it is well worth a read.