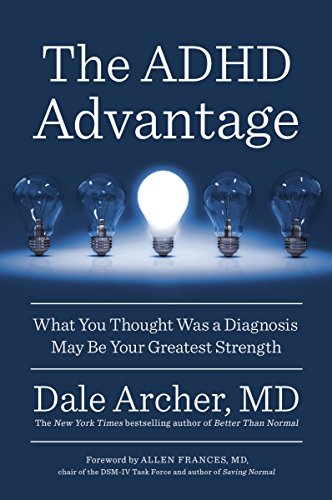 “Be proud of who you are and recognize that your unique combination of genetics, brain chemistry and personality could land you in the pages of history.”

Dr. Dale Archer, a leading psychiatrist and director of The Institute for Neuropsychiatry at Lake Charles, Louisiana, achieved great success with his bestseller Better than Normal in 2013.

Now he turns his focus from a range of mental health conditions to ADHD, or attention deficit hyperactivity disorder. Drawing on his vast clinical experience, Dr. Archer proposes that the symptoms of hyperactivity, inattention, and impulsivity which characterize ADHD can be harnessed for great good and success.

Over the past 20 years, the number of people diagnosed with ADHD has trebled. Drug company marketing and short-term thinking has led to an epidemic of “sick” individuals and, in Dr Archer’s eyes, over-treatment. As a doctor and someone with ADHD himself (who does not take medication), he is well-placed to draw conclusions.

Dr. Archer argues that many of the features of ADHD—lateral thinking, resilience, compassion, a sense of humor, good spirits, the ability to multitask, hyper-alertness when occupied, cool and collected crisis management—can be invaluable in the business world and in other domains of life such as sports.

He cites examples such as David Neeleman, founder of the airline JetBlue, who states, “If someone told me you could be normal or you could continue to have your ADD, I would take ADD. . . . I can distill complicated facts and come up with simple solutions.”

As Dr. Allen Frances, former chairman of the psychiatric Diagnostic and Statistical Manual-IV Task Force cautions, we are not helping the younger generation by medicating those whose lively behavior may simply be a result of growing up.

With the diagnosis of ADHD up to 11% in the US (it is only 2% in the UK) and medication to 6%, this has implications both for children and for college students (who obtain stimulants prescribed for those with ADHD to help them concentrate on their work).

Dr. Archer discusses the evolutionary origins of symptoms such as impulsivity which, in earlier eras, “could mean the difference between life and death in times of grave danger.”

How we respond to challenges is determined by our brain chemistry, particularly the hormone dopamine. Genes for ADHD have even been pinpointed, such as the dopamine transporter gene (also known as the “explorer gene”).

The book is full of inspiring characters such as Ty Pennington, the interior designer who went from school clown to success story; and Howie Mandel, presenter on America’s Got Talent, whose nonlinear thinking is key to his comedy acts.

If you are wondering if you have ADHD, there is a simple quiz included to determine where you sit on the spectrum. Drawing on his “continuum” theory from Better than Normal (that mental health disorders are an extension of personality traits), Dr. Archer explores the traits of ADHD that are present, to some extent, in all individuals.

Delving into literature, Dr. Archer highlights figures such as Huckleberry Finn, who couldn’t sit still in class; and “naughty” boys such as Calvin & Hobbes and Dennis the Menace. He also speculates that famous historical folk such as Wolfgang Mozart, Leonardo da Vinci, and Steve Jobs may have had the condition.

Girls may present in different ways, such as Shanna, now an ADHD coach, who was initially diagnosed with depression although she did not fit the criteria. Interestingly but perhaps unsurprisingly, younger children in a class are far more likely to receive an ADHD diagnosis.

The book presents a balanced approach, not ruling out medication altogether but reserving this a last resort or for the most severe cases. As one specialist puts it, “Pills without further therapy don’t do much at all.” Dr. Archer also mentions the serious adverse effects, such as stunted growth and suicide.

Alternatives to medication are suggested, such as increased involvement in sports, associative learning styles, behavioral training, and addressing factors such as sleep and family problems. Promising results from mindfulness-based cognitive therapy as well as “medication holidays” for those on prescribed drugs are discussed.

The book even suggests the way for ADHDers to find the perfect partner—apparently, opposites often attract—and finding someone with OCD-like tendencies may be a good idea. Relationships can be tricky due to miscommunications and forgetfulness, but working things through can be key to true love.

Finally, Dr. Archer urges us to, “Be proud of who you are and recognize that your unique combination of genetics, brain chemistry and personality could land you in the pages of history”—a very positive message.