Blockbuster Drugs: The Rise and Decline of the Pharmaceutical Industry 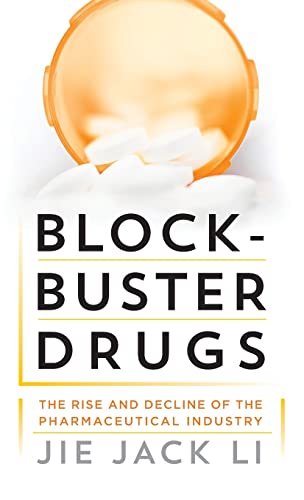 "If you are interested in the past, present, and future of the medicines you take . . . look no further than this book."

What makes a blockbuster drug? And what is the potential for future development? Associate Professor of Organic Chemistry and History of Drug Discovery Jie Jack Li takes us through the ages of pharmaceuticals in this informative and engaging book.

Using his past experience at Bristol-Myers Squibb, Professor Li is able to draw on his considerable knowledge of the area as well as providing well-informed insights and predictions for the next “big thing” in blockbuster drugs, otherwise known as a medication with sales of over $1 billion.

Challenging the assumptions of many who may believe pharmaceuticals are unethical and only interested in profit, the book examines the reputation of companies from the glory days of “Good ole aspirin” and even as late as 1985, when Merck donated $3.75 billion to provide everyone affected by river blindness with free ivermectin (Mectizan), to modern portrayals in media such as the Constant Gardener, loosely based on a researcher in the US company Apotex which was involved in the production of a drug for the blood disorder thalassaemia.

With quotes from Merck and Co, “We try to remember that medicines are for the patient . . . The profits follow and if we’ve remembered that, they have never failed to appear. The better we have remembered it, the larger they have been,” to baseball player Yogi Berra and writer Shakespeare, Professor Li links the medical world with its much broader cultural background in a way that will appeal to many. At times it can even be sensationalist and documentary-style, “What happened next would shake up . . . Wall Street.”

Yet the language can also be very technical at times, using complex vocabulary from chemistry and pharmacology. For instance, in explaining the production of the anti-ulcer drug Tagamet, the first blockbuster from 1986, “In retrospect, the need to have so much API (active principle ingredient) stemmed from the intrinsic low bioavailability of Tagamet and it had to be taken four times a day!

Despite this, many of the explanations are extremely clear, elucidating the complex chemical structures of medicines in a way that is easy to understand, for example when classifying the anti-allergy drugs called anti-histamines, “Schering-Plough’s Trimeton, Chlor-Trimeton (chlorpheniramine), and Optimine are all first generation antihistamines, just as Neoantergen and Benadryl.

Much of the first half of the book reads like a roll call of famous chemists, pharmacologists (Professor Li is keen to note the difference and importance of both) and companies, such as James Black, the ambitious pharmacologist who discovered both beta-blockers and certain anti-ulcer drugs, later winning the Nobel Prize for his efforts.

The challenges of drug development, ethics committees, the politics of working in a drug development team and marketing are also explored—one of Black’s first teams decided to take the drugs themselves to speed up the process!

Professor Li examines the promise and usefulness of so-called “me-too” drugs, such as Zantac (ranitidine), which was developed for ulcers after Tagamet but marketed at a higher price due to its favourable dosing schedule (it only needed to be taken once a day).

He also brings in interesting background stories such as the naming and discovery of warfarin, “the most successful rodenticide and the most used oral anticoagulant in history,” tainted heparin and kidney stones in China, the use of acupuncture during the Cultural Revolution and Greek mythology in the experience and treatment of pain.

Winners and losers are mentioned in this book, such as the withdrawn drugs rofecoxib, ximelegatran and thalidomide, the impact of side effects with the “black box” warnings on drugs such as Ticlid for blood disorders, and clinical trials into newer medications such as clopidogrel (Plavix).

Despite the darker side to the pharmaceutical industry, Professor Li is positive about the future, looking to biologicals and immunomodulating drugs to provide further revenue and income in this area. If you are interested in the past, present, and future of the medicines you take and the background to their production, look no further than this book.