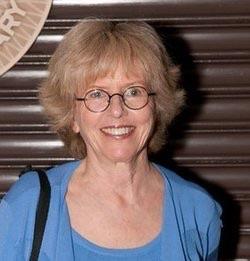 Grace Lichtenstein is an author, book critic, and former New York Times Rocky Mountains bureau chief and reporter. Her book reviews on music, sports, adventure, literature and the American West have appeared in the New York Times, Washington Post, TheMillions.com, PopMatters.com, and NYCityWoman.com. She was the book critic for Music Media Monthly, as well as a founding editor of Just Sports for Women.

Her books include A Long Way, Baby: Behind The Scenes in Women's Pro Tennis; Desperado; Machisma: Women and Daring; and Musical Gumbo: the Music of New Orleans (written with Laura Dankner).

A member of the Authors Guild and the National Book Critics Circle, she is on the board of Bike New York, the not-for-profit organization that promotes safe cycling through education and events like the TD Five Boro Bike Ride. She is an avid cyclist, skier, and Mets fan. She lives in Manhattan.

A long way, baby;: Behind the scenes in women's pro tennis

“Oppo works best as a guide to the new reality infiltrating presidential politics.”

The Affairs of the Falcóns: A Novel

“The Affairs of the Falcóns, though marred by repetition, is a deep dive into the impossible world of the undocumented in today’s society.”

Quarterback: Inside the Most Important Position in the National Football League

“For the diehard pro football fan interested in peeking behind the helmet, Quarterback makes absorbing reading.”

A Mad Love: An Introduction to Opera

“a valuable and blessedly concise addition to the literature.”

Lands of Lost Borders: A Journey on the Silk Road

Parts of this book might have been written by the American couple deliberately run over by a car driven by alleged ISIS supporters in Tajikistan this summer.

The Line Becomes a River: Dispatches from the Border

This beautiful and horrifying memoir should be required reading by anyone who feels that immigration is the nation’s number one issue right now.

Unstoppable: My Life So Far

David Foster Wallace, a competitive tennis player in his youth, once wrote that “Top athletes are compelling because they embody the comparison-based achievement we Americans revere—fastest

Goodnight, L.A.: The Rise and Fall of Classic Rock--The Untold Story from inside the Legendary Recording Studios

There is a good book lurking within this well-meaning jumble of anecdotes and once-boldface names.

The One Device: The Secret History of the iPhone

Hard as it is to believe, the iPhone is a decade old. It seems as though everyone has been talking on one, walking head down staring at one, or taking photos with one forever.

Some espionage writers follow the same character from one book to the next— John Le Carré’s George Smiley, for instance.

When the World Stopped to Listen: Van Cliburn's Cold War Triumph, and Its Aftermath

One of the pleasant interludes in the Cold War was the ecstatic reception that Van Cliburn received at Moscow’s first-ever Tchaikovsky International Piano Competition in 1958.

The Lucky Ones: A Novel

“The visceral impact of Julianne Pachico’s prose . . . is enough to convince a reader that disorder is only a rock, a knock, or a gunshot away.”

High Noon: The Hollywood Blacklist and the Making of an American Classic

1,000 Places to See in the United States and Canada Before You Die

“So many places, so little time,” warns the back cover of the third edition of this massive survey bursting with wonders throughout North America. Indeed, it’s hard to know where to begin.

The Wrong Side of Goodbye (A Harry Bosch Novel)

“Connelly himself only gets better with age.”

Anatomy of a Song: The Oral History of 45 Iconic Hits That Changed Rock, R&B and Pop

Oral history can be a tough genre to enjoy; it is by nature disjointed and often suggests an author is lazy.

One definition of heroine, according to my dictionary is “a woman who is admired for great or brave acts or fine qualities.” Note the word brave; it is crucial.