Quarterback: Inside the Most Important Position in the National Football League 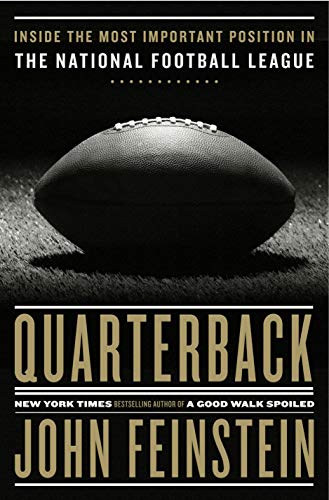 “For the diehard pro football fan interested in peeking behind the helmet, Quarterback makes absorbing reading.”

John Feinstein is among the most prolific sports book authors working these days (A Season on the Brink, A Short Walk Spoiled) and usually among the most reliable. Quarterback makes it into the red zone, but falls short of the goal line.

Feinstein’s main character choices are flawed. The idea of keying on a few major quarterbacks is good. However, followers of the NFL may well wish he had chosen more colorful ones who were active in 2017, the year the book covers.

Alex Smith, Joe Flacco, Andrew Luck, and Ryan Fitzpatrick are bright and articulate, but not lively enough to carry readers through all four quarters. A fan longs for an examination of the likes of Drew Brees, Phillip Rivers, Ben Roethlisberger, even Tom Brady.

More seriously, Feinstein’s one black quarterback is not an active player. He is Doug Williams, a former Super Bowl MVP and now a Redskins front office executive. Given that some of the most thrilling quarterbacks today are black — Dax Prescott, Deshaun Jackson, Cam Newton, Russell Wilson—why is not one of them included here?

To give Feinstein his due, his narrative is as smooth as a Tom Brady pass. He recounts Fitzpatrick’s unlikely journey from Harvard to professional football, Luck’s more likely journey from son of an NFL quarterback to first pick in the draft to a career at Indianapolis plagued by injuries, and Flacco’s steady progression from starter to Ravens Super Bowl champ.

Only one of his choices, Luck, was a starter midway through the 2018 season. That can’t be helped. And Feinstein makes his narrative interesting by showing in depth how they grind through their jobs both on the field, in the media, and at home with their families.

The quarterback, as everyone knows, is the most glamorous position but is also the most risky. A quarterback receives many accolades when a team wins, but suffers the most criticism when it loses.

Feinstein delivers this observation early as he shows Flacco accepting that burden. Before losing a game against the Pittsburgh Steelers, the player was asked about this. What if a loss is not your fault? “It’s always my fault,” Flacco replies. After the game, asked in the interview room to assess his play, Flacco says simply: “I sucked.”

Smith began 2017 leading his Chiefs to a 5–0 record. Nevertheless, he confides to Feinstein that Sunday night is the one night of the week he sleeps badly, win or lose. At home, once he and his wife put their three children to bed, he replays the game out loud: “We try to talk until we’re too tired to talk.” He then lies in bed to “replay every play that could have gone better.”

Luck, whose injuries often has limited his play for, opens up even more to Feinstein.

As the 2018 season was about to begin, he was returning to the Colts after missing all of 2017 recovering from shoulder surgery. He was emotionally so torn up that season that he and his fiancée retreated to Holland for two months to avoid the glare of the spotlight.

Now, “I have to admit I still have a bit of fear about starting to throw a football,” said this man for whom throwing a football was his life. “It was hard for me to admit vulnerability,” he tells Feinstein. The previous season “I felt a lot of shame and a lot of guilt. . . . I lost confidence in myself, not just as a player but as a person.”

Insights such as these make Feinstein’s book worthwhile. There is more here, too. He covers the expectation of big contracts and the reality of not much guaranteed dollars, the difference between white and black in first-round draft picks, the difficulty of moving one’s family often because of trades, and other issues.

For the diehard pro football fan interested in peeking behind the helmet, Quarterback makes absorbing reading.