Lands of Lost Borders: A Journey on the Silk Road 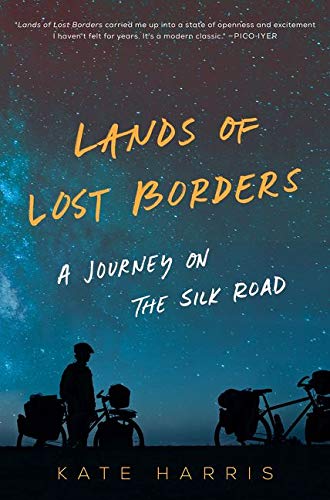 Parts of this book might have been written by the American couple deliberately run over by a car driven by alleged ISIS supporters in Tajikistan this summer. That was tragic; happily this book’s author is alive and well.

An immersive and keenly observed debut, it is about a Canadian young woman who could not sit still. With a degree in science and a Rhodes scholarship to Oxford, she disliked spending her days in a laboratory so much that she turned herself into an explorer. It is as thrilling to read about her ascents with a friend into the 16,000 foot peaks in Central Asia on a bicycle as it is scary to imagine trying such a feat oneself.

Harris’s book is about the journey along Marco Polo’s Silk Road—from Turkey thru the “Stans” of Central Asia to Tibet and Western China. More important, she feels each moment, physically, emotionally, and spiritually. Her North Star is the North Star, yet it is also Mars, to which as a child she longed to visit. She invokes Darwin, Carl Sagan and other scientists, alongside earlier wanderers like Alexandra David-Neel, Fanny Bullock Workman, and Wilfred Theisiger.

The book is packed with insights on why we travel. “We long our whole lives for things we’ve never known, places we’ve never been, abstractions that come alive to us in unexpected ways. What does the Silk Road have to do with Mars, except everything! Perhaps the great task of modern explorers is not to conquer to but to connect, to reveal how any given thing leads to another: the red planet to the Silk Road, bicycles to the moon, a modern Georgian highway back in time to the Ujarma Fortress.”

Harris’s time in the classroom and the lab is moderately interesting. Her excursion across the “Stans” wilderness is much more than that. It is filled with kind people who invited the two women to camp in their yards or sleep in their homes. In a touching moment, a restaurant owner washes their hair for them, by hand, with a bucket. “Of all the hospitable gestures we were met with along the Silk Road, and there were multitudes, this woman whistled softly to herself as mud streamed off our scalps ranks among the most generous and loving. It felt so good to be taken care of. . . .”

The women camped out along stark boulders, had some awful train rides they had to make to get places the bikes would not go, and some exciting moments when they snuck across Chinese border crossings to get into Tibet without papers. Harris makes the point that armies had guarded the high altitude wastes of the border between Tajikistan and Afghanistan (they did not cross into the latter)—dying of cold and suffering altitude sickness—for years, for no reason except politics.

Her point about borders is perfectly illustrated. In Western China, she shows how a guest house owner who is a member of the minority Uyghurs is subject to home invasion for no reason by Chinese majority Han police while they are there. If was as if they all were “plotting Uyghur rebellion, say, or simply breathing the same air.”

The author also notes that Marco Polo was no great adventurer so much as he was a merchant in search of profit, and that Darwin, after his voyage on the Beagle, spent the rest of his life comfortably at home in England.

The high point, literally as well as figuratively, is when the two cyclists travel across the forbidden lands of Tibet.  They mask themselves like other two-wheel travelers so they won’t be stopped. They rode with red flags on their bikes. They hated the disguise but it was necessary to look like the Chinese.

Instead of pure holiness, in Lhasa they encountered “tourists and police cars . . . strip malls and bars and discos . . . neon signs . . . advertising brands popular in Beijing.” How sad. Also sad was the fog when they reached Kathmandu in Nepal, which obscured the views of the Himalayas. By the end of their monumental journey, all Harris wanted was to settle into a cabin in the far north of North American near the Juneau Icefield—“an existence rich in mountains, words, stars, wildness, really everything but money, but when it comes to that, who needs more than enough?”

Two disappointments: there are no photos in the book. More consequentially, the single map on the title page is inadequate. It is hard to follow their journey.

Nevertheless, we are so lucky that this “freelance explorer” has left us an uncompromising, breathless record of her Eastern excursion.