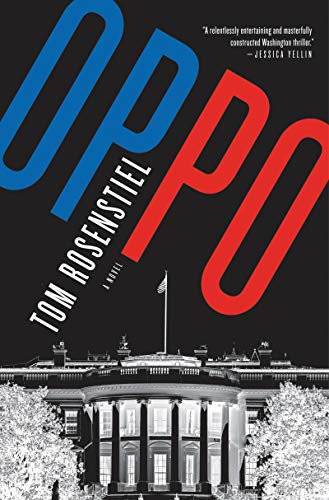 “Oppo works best as a guide to the new reality infiltrating presidential politics.”

Here’s a book by a seasoned Washington journalist pegged to the 2020 Presidential primaries. While designed as a thriller, it works better as an insider’s take on the effect of big money on polarized elections.

As the candidates like to say: Let’s be clear. No major candidate that we know about has offered the vice presidential role to anyone before Super Tuesday, much less to a member of the other party. But in secret? Anything is possible.

The next thing we know, someone has heard about the offers and the moderate Republican, Senator Wendy Upton of Arizona, gets an anonymous warning; if she accepts the offer, unnamed people are prepared to leak dirt that will destroy her. Washington fixers Peter Rena and Randi Brooks are called in to track down the rumors and defuse them.

The atmosphere is tense both in Rena and Brooks’ office and in Washington itself, as big money PACs and supposed grass-roots movements are working to upend the election. The leading candidates are flawed. Upton, on the other hand, has a resumé so impressive a reader wonders why she is not running for president herself.

As Rena, Brooks and their diverse staffers fan out to do opposition research, or “oppo,” on Upton, Rosenstiel gives us a marvelous tutorial on how campaigns work in the age of Trump and social media. (Trump is not mentioned in the book.) Fist fights break out at political rallies. Men in cars surveil the homes of players in this game. Wendy Upton becomes reluctant to tell her handlers everything about her past that could hurt her.

During one debate—again nearly unbelievably—candidates from both parties battle with one another. An observer, clearly a stand-in for the author, thinks:  “Something in the  country had shifted, and the nation wasn’t taking a detour in its long journey as a democracy. Instead, maybe it was headed down an entirely new road. . . . In the era of networked connectivity, foreign manipulation of social media, corporations without borders, and a global economy, maybe eighteenth-century notions of democracy had run their course.”

Rosenstiel’s depiction of this new era is more dramatic and real than his weird plot about the threats to Upton. Despite the cloak and dagger stuff, the involvement of billionaire donors and candidates, shadow corporate entities, and foreign blackmailers, Oppo works best as a guide to the new reality infiltrating presidential politics. In a better thriller, Rena and Brooks would be more than cardboard operatives. Here, they simply propel the action.

As Upton’s chief advisor looks at the changed landscape, he muses about the idea that “every crisis is an opportunity. If that were so, then every opportunity also had to be a crisis.” In Oppo, the crisis is less interesting than the opportunity.