The Assault on American Excellence 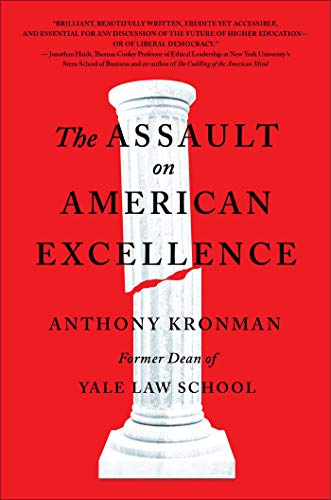 “The Assault on American Excellence is a fantastic book. Its research is impeccable, and the writing is superb.”

Despite the fact that they are upheld as the world’s great innovation centers and laboratories of “multiculturalism,” every keen observer knows that American universities are unhealthy. Very unhealthy. Those on the left-wing of the political spectrum denounce the university system for perpetuating inter-elite privilege and covering up rampant sex crimes ranging from sexual assault to rape. The right-wing lambast our universities for left-wing groupthink and anti-American, anti-Christian, and anti-white attitudes. Dr. Anthony Kronman, the former dean of Yale Law School, thinks that both sides are right, but are wrong overall because they miss the entire premise of a university education. The university is not intended to be the marketplace of ideas, nor is it designed to be an all-inclusive “home.”

While Kronman proudly admits to being a former ’60s radical who participated in protests during his undergraduate days, and indeed he sounds like a staid liberal, he articulates in The Assault on American Excellence that universities are supposed to foster aristocracy and the aristocratic spirit.

Rather than landed nobles, American universities need to find “aristocrats of the soul.” While this term was used by interwar era writers like the German Ernst Junger and the Italian Julius Evola, Kronman’s aristocrats are not action-oriented soldiers of the trench generation, but rather intellectually robust students who are consumed with the challenges of living the best life possible. That, Kronman writes, is the goal of education—to cultivate the elite few who are prepared to wrestle with the ideas of titans such as Seneca, Socrates, and Shakespeare. Aristocrats of the soul, who invariably require leisure, are “more developed as human beings” because of their exposure to difficult and profound ideas.

Myriad obstacles stand in the way of true education. The first is democracy, or rather democracy’s egalitarian leveling of all free thought and free expression. In the words of Oliver Wendell Holmes, Jr., political and legal democracy produces “democratic negation,” or the destruction of what is subtle and profound. This leveling threatens the university, which Kronman idealizes as an island of “aristocratic spirit.”

All other impediments flow from this democratic negation—the insistence on multiculturalism leads to the presumption of intellectual egalitarianism (which is patently false); the use of personal identity and experience as the ultimate authority (which closes off intellectual conversation); and the victory of the vocational spirit, which says that education only matters if it has material benefits. All of these ideas, which are destroying the American university from within and without, assault the notion and search for individual excellence.

Kronman writes well and is an articulate defender of the Western tradition. The Assault on American Excellence is a learned work that goes against the grain, and its support for the return of a hierarchical and aristocratic academia is so clear-eyed and correct that it is impossible to deny.

Kronman is on far less stable ground in other ways, however. First of all, like most believers in the Enlightenment, the good doctor has a poor understanding of the human animal. The idea that today’s college students would ever greet controversial speakers with proclamations of intellectual tolerance is laughable. Yes, they should do that, but they won’t. Kronman himself resorted to intimidation and gauche behavior when he was a student, too. Humans, especially young ones, have always been emotional, and the undergraduates of 2019 are the most emotional of all.

Kronman’s biggest error is his attachment to liberal democracy. This is not intrinsically bad. Rather, Kronman’s support for islands of aristocracy in democratic seas makes logical sense, but is near impossible in practice. Ever since World War II, when the American academy became a bride of the state, the university has been subject to the whims of public opinion and government funding. Long gone are the days of eccentric professors; their replacements are better bureaucrats than scholars. Dr. Kronman recognizes but does not want to admit that democratic levelling is a rapacious monster. Liberal democracy, which is the world’s most successful form of totalitarianism, will never allow islands of aristocracy to exist because they offer proof that egalitarianism is built on a false premise.

The Assault on American Excellence is a fantastic book. Its research is impeccable, and the writing is superb. Its only weakness is its inability to take its arguments to their logical conclusion.