The Most Hated Man in America: Jerry Sandusky and the Rush to Judgment 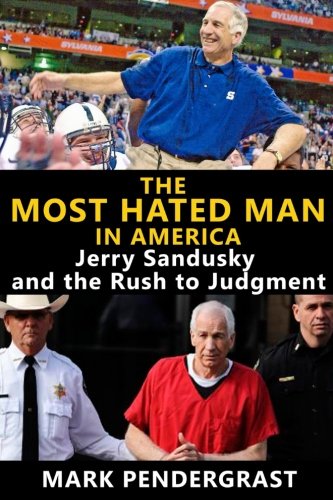 “The Most Hated Man in America is an invaluable cautionary tale about the insidious threat to society of induced moral panics that can easily run away with reason while hijacking facts.”

“How easy it was to erase a man’s past and to construct a new version of him, an overwhelming version, against which it seemed impossible to fight” (Salman Rushdie, Joseph Anton: A Memoir)

Apple pie, baseball and, in many regions, football signify everything quintessentially American—right up there with the stars and stripes at the very core of our cultural ideology. Despite our diversity, these symbols have served as unifiers in building a national identity.

College football in particular has served as a rallying point for people from all walks of life, ethnic backgrounds, skin shades, and social strata. You might be on vacation in Timbuktu but wearing the same college booster T-shirt as another tourist waiting for the airport shuttle will guarantee a friendly wave, if not an animated conversation about your team’s performance.

Indeed, in some college tributary areas football is akin to a religion, wherein the game and its most successful coaches and players are revered and almost worshipped as icons. For the general public, athletics, especially football, is the main window through which they view campuses, and it is not surprising that a university’s quality may be conflated with its football record.

In other words, football tends to eclipse the youth educational and moral instructional role, particularly in the big-time programs which are huge income earners these days. The business of college football dovetails with our near-idolatry of the market system such that it’s all about enshrining the brand.

This holds true especially on campuses like Penn State University, where football culture has long been pre-eminent and winning coaches like head coach Joe Paterno and assistant coach Jerry Sandusky gained the status of supreme gods. Paterno was renowned throughout the country as the most victorious coach in NCAA history (409 wins and 37 bowl appearances from 1966 to 2011). Much of this success was attributed to Sandusky’s defensive coaching genius over a 30-year span until 1999 when he retired with special emeritus status to concentrate on the at-risk youth charity The Second Mile he founded in 1977, which also received national accolades.

So, imagine the shock, grief and bewildered outrage fueled by widespread moral panic that erupted in the smug little town of State College, Pennsylvania, when Sandusky was accused of serial sexual abuse of young boys in his charity program, frequently on university property and with the alleged knowledge of university officials, and convicted in 2012 on 45 counts incurring a minimum sentence of 30 years, essentially a life sentence for a man of 67.

The legendary Paterno was fired by the university at age 84 for concealing information about Sandusky’s perversions and died of lung cancer a couple of months later having been stripped by the NCAA of 111 football wins achieved over the 11-year span of the Sandusky child sex scandal. The university president and other senior officials also had to resign.

In The Most Hated Man in America: Jerry Sandusky and the Rush to Judgment acclaimed science writer and seasoned investigative researcher Mark Pendergrast casts a fresh eye on this sensational story of an institutional coverup at the highest levels that continued to expose numerous children to a child-molesting monster in order to protect the reputation of an almighty football program.

Through meticulous research involving two prison visits to Sandusky as well as extensive correspondence with him, plus numerous interviews with Sandusky’s family, friends, colleagues, former participants in The Second Mile, psychologists and other experts, along with detailed combing through police records, legal documents, and other reports, Pendergrast exposes a rat’s nest of glaring inconsistencies, procedural irregularities, and outright fabrications in the case against Sandusky.

What if Jerry Sandusky is an innocent man convicted on the heels of a moral panic fueled by sensationalist media, police trawling, and memory-warping psychotherapy based on discredited repressed memory theory? Pendergrast makes a compelling case for this alternative narrative, but not via a hard sell. Rather, readers are invited to take another look at the real “facts” of the case, or lack thereof, as they emerged, and urged to re-open their minds instead of “rush to judgment.”

Pendergrast does this through an onion-peeling approach, stripping off the layers of the case against Sandusky which was constructed piecemeal over several years. He views the careless haste with which the trial phase was thrown together as spurred by escalating moral panic—a widespread feeling of fear fanned by the media and other vested interests that a loathsome evil threatens the fundamental values and well-being of society.

Seen through this lens, Sandusky was convicted by the court of public opinion long before the final sentencing in a moral stampede of pre-judgment unprecedented in the history of the American justice system.

The first section of the book deals with the creation of Sandusky’s sexual assault victims over more than a decade, from the first few unproven allegations to the active trolling for accusers on the part of the police seeking to build their case.

The second section deals with the rush to judgment on the part of the media, the legal system, and the public, with only a few dissenting voices highlighting the holes in the evidence. The final section offers a short, but eye-opening profile of “the real Jerry Sandusky” and the living death that he endures in jail today. The last chapter, “What’s the Verdict?” reviews the evidence.

“In 1998, the first alarm bell went off when the mother of a Second Mile boy learned that Sandusky had showered naked with her son. She turned him into police, but they couldn’t prove that he had done anything illegal and let him go. Just three years later, grad student Mike McQueary…walked into a Penn State locker room and heard wet slapping sounds that he interpreted as sexual. It was Sandusky with a boy. McQueary alerted Penn State officials, who didn’t inform the police, but merely prohibited Sandusky from working out with boys in Penn State facilities. Finally, in November 2008, a shy fifteen-year-old boy named Aaron Fisher blew the whistle on Sandusky, telling high school officials that he had been touched inappropriately. Psychologist Mike Gillum encouraged the traumatized Fisher to tell him the worst—Sandusky had forced oral sex on him”.

Still, Sandusky was not arrested until three years later, after seven more victims came forward as a result of relentless questioning by police, lawyers, counselors, and psychologists of Second Mile program participants within accessible range of State College and after the university offered big reparation payouts. The vast majority of Second Mile children spoke of Sandusky in glowing terms as a role model. But a few key witnesses had upped the ante, first telling of incidents where nothing really inappropriate occurred which they later elaborated to recount perversions in vivid detail.

There too many instances of the myriad procedural improprieties surrounding the construction of the case against Sandusky to allude to here. Pendergrast does an excellent job at putting together the counter-case of a total miscarriage of justice citing coercion of victims, victims, and witnesses who kept changing their stories, issuing conflicting testimonies, inaccurate time frames, discredited repressed memories, questionable experts, incompetent defense, judicial bias, circumstantial or fabricated evidence and, above all, the trial venue in the small town of State College where most people had some kind of connection to the university and few could retain an open mind.

Most convincing of all, perhaps, is the portrait that emerges of the real Jerry Sandusky who grew up as an only son to parents dedicated to youth social service programs running a community recreation center for children which the young Jerry embraced wholeheartedly.

As an adult, he retained this love for sports, youths, and the social service ethos he attached to this. While he was passionate about his coaching position, the Second Mile program to help troubled youths get back on track through summer camps, sports and embracing them as members of his own family was his reason for living.

A “big kid” himself, taking showers naked after workouts with kids was second nature throughout his life, as was what he called “horsing around” and roughhousing including cracking the backs of kids, patting them on the knee while driving, hugging them, throwing soap, and slapping them with a wet towel. Was the latter the infamous slapping sound that made the witness imagine that Sandusky was having sex with the boy in the shower? Inappropriate behavior for this day and age, to be sure, where we have become sensitized to the importance of personal boundaries, but reflecting a naive old-school Mayberry worldview of idealized father-son relations rather than perversion.

In sum, The Most Hated Man in America “is part psychological thriller, part detective story, and part cautionary tale about how moral panics can be created by our media, public perception, and legal system.” The Sandusky saga has condemned a likely innocent man to die in jail, ruined the lives of his family, erased much of the Paterno legacy, ended administrative careers, and damaged the alleged victims if they have come to believe traumatic events that never occurred.

Furthermore, writing this book might be costly to Pendergrast as well. Under conditions of moral panic not only is this kind of topic toxic, but also the very suggestion that the evil Sandusky is innocent. The fact that the major publishing houses would not touch Pendergrast’s manuscript underscores the venom that continues to accrue to the Penn State child sex scandal.

Who should read the book? Everybody who is convinced that Jerry Sandusky is guilty, especially those who rushed to judgment without examining the facts and those who believe everything they hear from their preferred media.

It should also be read by everyone concerned with upholding a fair and transparent judicial system wherein guilt must by proven, not falsely constructed. And the book should be required reading for those who still believe in the validity of repressed memories “recovered” through psychotherapy and/or coercive interrogation.

Above all, The Most Hated Man in America is an invaluable cautionary tale about the insidious threat to society of induced moral panics that can easily run away with reason while hijacking facts. In an era where claims of “fake news” and “alternative facts” seem to be increasingly common and popular movements such as #MeToo and Times Up can capture public imagination overnight, counter narratives such as Pendergrast’s thoughtful work are more important than ever.