George Marshall: Defender of the Republic 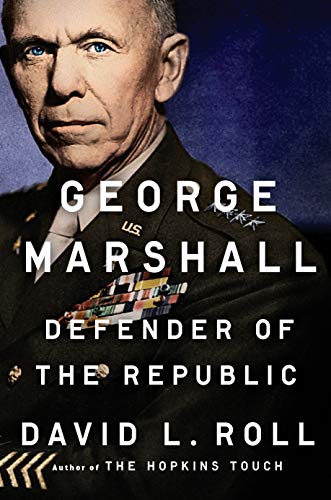 “George Marshall lived by a moral code and never strayed from it. That was the key to his greatness.”

Columnist George Will called George C. Marshall the greatest American of the 20th century. He was certainly one of the greatest. Like his hero George Washington, Marshall was a soldier-statesman, though unlike Washington (and his other hero Robert E. Lee) he never led troops on the field of battle. Marshall’s greatness stemmed from his judgment, his sense of duty, and above all his character.

David Roll, the author of a well-received biography of Harry Hopkins, has written a new biography of Marshall, subtitled Defender of the Republic. It is not a full biography—there is very little in the book about Marshall’s childhood, a few pages about his years at the Virginia Military Institute (VMI), and a very brief chapter on the last eight years of his life. Roll’s book is largely about Marshall the soldier and statesman.

Roll clearly admires Marshall—it is difficult not to admire him. But this is not a hagiographic account of Marshall’s public service. Roll critically reviews the mistakes and misjudgments that Marshall made throughout his lengthy public career. But even when he erred or failed to accomplish a mission, Marshall’s sense of duty and his unblemished character were manifest.

Marshall throughout his military career longed to command troops in battle, but in both the First World War and Second World War his skills at organization and staff work kept him behind the front lines.

In World War I, while Douglas MacArthur was earning seven Silver Stars and other military decorations by fearlessly leading troops in combat, and while George Patton was displaying his initial flare for tank warfare on the Western Front and earning a Distinguished Service Cross, Marshall focused on planning, strategy, and logistics, making sure that America’s soldiers were properly trained, organized, and equipped for battle.

Marshall planned the 1st Division’s attack at Cantigny in May 1918, which Roll notes was “America’s first full-scale assault in the Great War.” Prior to and during the assault, Marshall worked long hours, writes Roll, “rarely sleeping for an hour or two.” At night, he would roam behind enemy lines to gather intelligence in the face of enemy artillery and small-arms fire.

After Cantigny, Marshall requested a combat command. Instead, he was ordered to serve in the Operations Section at General Pershing’s headquarters under Colonel Fox Connor. “For the remainder of his army career,” Roll notes, “Marshall would serve at the highest levels of war strategy and planning, all the while harboring an ambition to lead troops in battle.”

Marshall’s reputation for planning, operations, and logistics was cemented at Saint-Mihiel and the Meuse-Argonne offensive in September 1918, where he organized the movement of more than a half-million soldiers, 2700 guns, more than 90,000 horses, and 900,000 tons of ammunition and supplies in a two-week time period. After the First World War, Marshall was viewed, Roll notes, as “a master in the arts of planning battles and managing the training, organization, and movement of large bodies of troops.” Those qualities and talents would be put to an even greater test 20 years later in World War II.

In between the wars, Marshall served for three years as chief aide to the army’s new chief of staff John J. Pershing. Working in what was then called the State, War and Navy building next to the White House, Marshall, in Roll’s words, took a “graduate course in politics, government, and management,” that would help him immensely when he served as army chief of staff during the Second World War.

Marshall gained a reputation for being apolitical and unafraid to tell his supervisors unpleasant truths. He would demonstrate these qualities repeatedly throughout his years of public service. He also shied away from the public spotlight and rarely engaged in self-promotion, especially at the expense of others. His rise to power in the army and later as a cabinet-level statesman occurred because his military and political superiors recognized his abilities and his character.

After nearly a decade of appeasement of the European dictators and Japanese militarists by the Western powers, and nearly two decades of military unpreparedness by the United States, FDR in 1939 selected Marshall over dozens of senior officers to get the country ready to go to war. It was a daunting task. In just a few years, Marshall oversaw the transformation of the U.S. Army from a relatively small, mostly continental force to an army that would fight and win (along with the Navy and Marines) a global conflict.

In implementing this vast expansion of the American army, Marshall selected the commanders who would lead America to victory: MacArthur, Eisenhower, Bradley, Patton, Clark, Truscott, Arnold, and others. Roll criticizes Marshall, however, for his failure to racially integrate the American army. It was Marshall’s view that you should not subject the armed services to social experimentation in the midst of a global war.

Roll also gives Marshall low marks for his role in the events leading up to the Japanese attack on Pearl Harbor. Though Marshall, after being informed of likely Japanese aggression via intercepted messages, attempted to warn Hawaii’s Army commander Walter Short to be prepared for “hostile action,” he failed to follow up to ensure that Short put the islands on full alert. An army board later censured Marshall for this omission. Roll writes that, “Marshall rightly shares some degree of responsibility for the disaster that ensued.”

After the war, Winston Churchill called Marshall the “organizer of victory” in World War II, but Roll shows that Marshall was much more than that. In many ways he was the glue—or at least part of the glue—that held the U.S.-British alliance together. This, too, was a daunting task.

Though united in war by common foes, the United States and Britain did not initially share a common war strategy or a common global outlook. Marshall played the dual role of advocating U.S. strategies and interests while ensuring that in the end the Allies pursued a joint military strategy. The British-American Combined Chiefs of Staff had to plan and implement a global strategy, and the infighting was fierce.

American and British military chiefs clashed repeatedly over strategy and priorities. In Europe, Marshall and his American colleagues favored a build-up of forces on the British Isles and a direct thrust across the English Channel to liberate France and attack Germany’s Siegfried Line, while the British advocated for a Mediterranean strategy that included North Africa, Sicily, Italy, and the Balkans.

In the end, against Marshall’s better judgment, the Allies delayed the cross-channel invasion and attacked North Africa and what was erroneously called the “soft underbelly” of Europe. Roll agrees with most military historians that Marshall’s plan to invade France in 1942 was premature.

Marshall was the strongest advocate for what was eventually codenamed Operation Overlord. He hoped to be named Supreme Commander of that battle, but, as in the First World War, he would be denied command in the field. FDR needed him in Washington to oversee the entire war effort.

Marshall was indispensable in Washington because every key allied leader—military and political—trusted and respected him. Marshall’s advice was never compromised by personal ambition or biases. His advice was not always correct, and his judgments were not always sound, but his motives were pure. He wanted to do what he thought was right.

The peace that ended the Second World War led directly to the Cold War, and once again Marshall was called upon to serve—this time as a statesman. He served as President Truman’s envoy to China in an unsuccessful and frustrating effort to diplomatically resolve China’s civil war between the Nationalists and Communists. It was Truman’s policy, rather than Marshall’s effort to implement it, which resulted in failure and what was later called the “loss” of China to the communists. Marshall would later suffer the ludicrous allegations that he was “soft” on communism.

Marshall later served as Secretary of State and Secretary of Defense under Truman. As Secretary of State, he promoted and oversaw the economic recovery plan for Western Europe that bears his name. He also established the Office of Policy and Planning—and appointed George Kennan as its first director—to take a long-term view of U.S. global strategy.

Roll notes that Marshall gained the trust and respect of Republican Senator Arthur Vandenberg, “the indispensable isolationist-turned-internationalist who shepherded the European recovery legislation through Congress.” The Marshall Plan helped Western Europe get back on its feet to serve as a bulwark to contain the Soviet Union.

Roll notes that Marshall opposed U.S. early recognition of the state of Israel, but was overruled by Truman whom Marshall believed was motivated by domestic political concerns. Marshall worried that Truman’s action would harm U.S. interests, including energy interests, in the Arab world, and lead to endless conflict between Jews and Arabs in that part of the world.

After leaving the State Department, Marshall wanted nothing more than to enjoy retirement, but once again he was asked by the president to serve his country and answered the call of duty, this time as Secretary of Defense during the Korean War. It was yet another daunting task—to oversee an increasingly divisive and controversial war that would end in stalemate.

Marshall finally retired in September 1951 to his home in Leesburg, Virginia, with his wife Katherine. Marshall had no children of his own, but lost a stepson to combat in Italy during World War II. Marshall died at age 78 at Walter Reed Hospital on October 16, 1959, after suffering a series of strokes.

What is missing from an otherwise brilliant portrait of a great man and leader is the source of Marshall’s character. Roll for some unknown reason devotes only a few paragraphs to Marshall’s childhood years growing up in the 1880s and 1890s in Uniontown, a rugged coal-town in southwestern Pennsylvania.

Forrest Pogue, in his still definitive four-volume biography of Marshall, traced Marshall’s character formation to his English and Scotch-Irish heritage and the “pioneer, individualist tradition” of Uniontown. Pogue described Marshall as a shy, quiet and “unusually serious” boy who loved history, which included visits to nearby Braddock’s trail and Fort Necessity where George Washington received his baptism by fire in the French and Indian War.

Like his hero Washington, Marshall at an early age consciously, in Pogue’s words, “sought . . . to excel and to be without visible flaw in whatever he tried to do.” His character and inner stoicism was further shaped by VMI and his early years in the U.S. Army. George Marshall lived by a moral code and never strayed from it. That was the key to his greatness.