The Stupidity of War: American Foreign Policy and the Case for Complacency 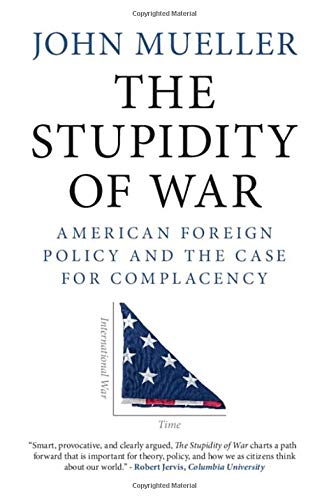 “Given the cherry-picked evidence, faulty logic, and sheer naivete of this book, any reader hoping to understand world affairs should turn elsewhere.”

John Mueller, a professor at Ohio State University and member of the American Academy of Arts and Sciences, has written a follow-up to his earlier books such as Retreat from Doomsday: The  Obsolescence of Major War (Basic Books, 1989). The Stupidity of War does not lack for erudition. Its bibliography lists more than 650 articles and books (all in English). But it lacks both balance and logic. Mueller writes as if no actor ever had serious reasons to prepare for war, wage war, or threaten to do so. He makes the case for appeasement as well as complacency.

Reviewing Cold War history, Mueller concludes that the United States erred in focusing on the capacity rather than the intent of its adversaries. Since the USSR had suffered much greater casualties in World War II than the United States, it was unthinkable—says Mueller—that Kremlin leaders would intend war. Instead of inferring intent from capacity, Mueller says Washington should try to discern the other side’s intentions.

Mueller is simply naïve. He seems incapable of imagining that governments might mask aggressive plans with elaborate disguises. Russians have long excelled at what they call maskirovka. Asked what would have been Stalin’s response if the Truman administration had chosen not to proceed with a hydrogen bomb, Stalin’s H-bomb designer Andrei Sakharov replied that the Soviet leader would have welcomed US forbearance and proceeded with his own thermonuclear device. Meanwhile, the Kremlin was sponsoring congresses of the peoples for peace.

Should the Soviets have been complacent when the United States established a nuclear weapon monopoly in 1945? Was there any assurance the Americans would not use their monopoly to push Soviets and their proteges out of Eastern Europe? Should Washington have been complacent when the Soviets tested an ICBM and launched a satellite in 1957? Just one year later Khrushchev issued the first of several ultimata demanding the West abandon West Berlin. Actions lead to reactions. In many cases, each side provoked the other.

Mueller argues that the United States overreacted to the North Korean invasion of South Korea in 1950. True, the attack did not prove to be the onset of a broader assault by the USSR and China on the free world. But US complacency emboldened both Kim Il Sung and Stalin. The Soviets equipped the North with heavy arms before they withdrew from the North in 1948, but Americans did not do so for the South when they pulled out.

On January 12, 1950, Secretary of State Dean Acheson outlined a US defense perimeter in the Asian Pacific that excluded South Korea. He did not appease anybody except the US Congress, but showed himself utterly complacent. A year later, General Douglas MacArthur was also complacent as he ignored warnings that a US advance toward the Yalu River could provoke China to enter the fray. Faced with a potential aggressor, a prudent actor will neither appease nor daydream.

Mueller interprets the 1962 Cuban confrontation in these words: Appeasement “worked like a charm in the Cuban missile crisis. When US President John F. Kennedy sternly suggested he would use his military to remove offending nuclear missiles in nearby Cuba, Soviet premier Nikita Khrushchev obligingly appeased him. Kennedy pronounced himself satisfied, no attack took place, and all lived at least semi-happily thereafter.”

Every sentence is misleading. The United States was complacent in 1962 and did not spot the Soviet missiles until they were almost ready for action. That Kennedy “suggested” is too weak a term to describe what happened. The Americans deployed a naval quarantine and a force ready to invade. Robert Kennedy warned the Soviet ambassador in private that the president would act soon if the missiles were not withdrawn. That Khrushchev “obligingly appeased” completely mischaracterizes his mood, which bordered on panic. But Nikita got a quid pro quo: Washington pledged to remove its missiles from Turkey in the not-too-distant future—a pledge that both sides kept secret for years. All this was diplomatic bargaining--not “appeasement.”

One can argue that JFK overreacted. Should he have risked nuclear war over some Soviet missiles that did not alter much the balance of power? But the whole exercise did not show the merits of “complacency” or “appeasement.”

Mueller also errs in neglecting to empathize with the pressures on the US president and the Soviet First Secretary. Having appeared weak on many occasions in 1961, Kennedy had good reason to fear he would be impeached if he failed to respond to the clandestine missile deployment. Determined never again to approach the brink of war, JFK laid out on June 10, 1963, a well-balanced “Strategy of Peace” in a speech that elicited a positive response in Moscow. In October 1964 Khrushchev’s comrades removed him from office for his “hare-brained” stunts, which including provoking the United States and then backing down. Lessons learned? Soviets resolved never again to be bullied into such humiliation. Nothing said about the merits of complacency or appeasement.

Part One of Stupidity addresses the threats from Korea to the “war on terror.” Part Two evaluates present threats such as the rise of China, the assertiveness of Russia, and the “antics” of Iran. Mueller’s  analysis, however, is out of this world. He rationalizes and seems to justify China’s militarization of the South China Sea and its threats to take Taiwan by force. Worried that the US Navy will not keep the sea open to Chinese and other commercial shipping, Mueller states on page 147 that this “concern has led to an elaborate Chinee scheme called the Belt and Road Initiative, to establish sea and land lanes to maintain and enhance China’s ability to maintain trade with the rest of the world . . ..” Is he inferring intent from capacity or vice versa? In any case the Belt and Road Initiative focuses on developing  new Silk Roads—mostly on land,  toward Europe.

As for Taiwan, Mueller assures us that China’s strategy is long-term and marked by patience. The whole dispute may be resolved peacefully over time—especially “if China becomes a true democracy.” For now, however, should Taiwan just  ignore the signs that Xi Jinping wants reunification on his watch? Should Taiwan be complacent when the island nation is harassed by Chinese jet planes and an aircraft carrier? And when might Taipei expect mainland China to become a “true democracy”?

Russian assertiveness in Ukraine and elsewhere? Much of it has been a (legitimate?) response to the eastward expansion of NATO. The West should accept now that Crimea is part of Russia and make clear that Ukraine may not join NATO. Appeasement in action?

Did Russian hackers affect America’s 2016 elections? Mueller asserts that “Russia’s cyber invasion was wildly counterproductive for the perpetrators.” Washington failed to lift economic sanctions even though Donald Trump became president. Russia’s interference was not a “cosmic threat” and “American democracy is entirely likely to survive.” Mueller ignores multiple signs that Trump served as a Kremlin stooge and that, no longer in office, he and his followers continue to degrade America’s democratic institutions.

Iranian “antics”? They included taking hostage what Mueller calls “a few dozen Americans working at the embassy in Iran" (correct number: 50) and holding them for 444 days. By Mueller’s reasoning, neither Israel nor the United States should worry about Iran’s growing missile arsenal, its nuclear technology, oi its support for Hezbollah forces across the region.

Mueller’s claims about the “stupidity” of war are vindicated by thousands of years of human history. Homer and Thucydides took note of  the costs of war as did the ancient Indian epic Mahābārata. Surely America’s Indochina wars under Presidents Johnson and Nixon were among the longest, costliest, least needed, and least successful military campaigns in US history. But the Indochina disasters pale next to those resulting from the Middle Eastern interventions spearheaded by George W. Bush and continued under his successors.

Mueller is correct that there has been a global aversion to war since 1945. Also, that the nuclear arsenals accumulated by the United States and other powers  exceed any conceivable form of rationality. But his arguments for complacency and appeasement are not well founded. Given the threats posed by weapons of mass destruction (as well as climate change), we need urgent attention and action—not complacency. Given the growing appetite for militant expansion shown by Xi Jinping and other dictators, appeasement is not appropriate.

Given the cherry-picked evidence, faulty logic, and sheer naivete of this book, any reader hoping to understand world affairs should turn elsewhere.