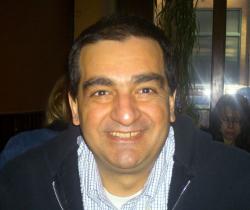 John Presta, the son of Italian-born immigrants, was born in Chicago, Illinois in 1953. Mr. Presta has a lifelong passion for the printed word that he acquired as a six-year-old newspaper boy. He is married to Michelle, and started a community bookstore that was known for books and community activism, Reading on Walden, in 1991, in Chicago’s Beverly community.

In 1999, they used their community organizing skills to plan and execute a candidates’ forum that was held on March 7, 2000. They volunteered in Barack Obama’s 2000 Congressional campaign and so did many of the 600 people in attendance—that meeting became the root of the “grassroots” movement.

Obama lost in 2000, but Obama didn’t lose John and Michelle, who worked his historic 2004 campaign for United States Senate from the beginning. The seeds planted in 2000 were taking root and spread rapidly during the 2004 United States Senate campaign. That great victory, fueled by an enormous and unprecedented grassroots movement, culminated on March 16, 2004, launching Barack Obama onto the national and international scene.

Mr. Presta is still active in many political campaigns. He writes for several publications, including The Daily Kos and the Chicago Examiner. He is a member of the Society of Midland Authors and is currently working on the next book in the Mr. & Mrs. Grassroots series. In 2010 Mr. Presta was awarded the 2010 USA National Best Book Award for African American Studies.

“Regardless of the results of the legislative challenges and the court fights, Remedy and Reaction elevates our understanding of the historical picture of the health care debate.”

The Persistence of the Color Line: Racial Politics and the Obama Presidency

“This book does what books like this should: provoke thought and conversation in addressing issues that are highly uncomfortable.

American Dreamers: How the Left Changed a Nation

“The evolution and revolution of liberal thought is chronicled in this well-written book about how we got to where we are today. . . .

A Secret Life: The Lies and Scandals of President Grover Cleveland

“A Secret Life is a masterfully researched biography.”

Battle for the City of the Dead: In the Shadow of the Golden Dome, Najaf, August 2004

Battle of the City of the Dead by Dick Camp chronicles a three-week battle in the Iraqi War. Mr.

Then Everything Changed by Jeff Greenfield is an ambitious book that takes three important pieces of recent American presidential history and simply changes them.

Deadly Spin: An Insurance Company Insider Speaks Out on How Corporate PR Is Killing Health Care and Deceiving Americans

The Patient Protection and Affordable Care Act of 2010 (PPACA) passed in the Congress this past March.

Blessed Are the Organized: Grassroots Democracy in America

In Blessed Are the Organized: Grassroots Democracy in America, Jeffrey Stout travels throughout America on a journey to find those involved in changing the world in which they live by gett

Obama’s Wars is the first real, living history of the Obama Administration as told by many White House insiders: including the President himself.

Young Mr. Obama: Chicago and the Making of a Black President

In Young Mr. Obama: Chicago and the Making of a Black President, Edward McClelland explores the early years of Obama’s life in Chicago and how those years influenced his life.

The Bridge: The Life and Rise of Barack Obama

“Barack Obama is what comes at the end of that bridge  in Selma.”
—Congressman John Lewis

Cowboy Conservatism: Texas and the Rise of the Modern Right (New Directions In Southern History)

Cowboy Conservatism is an illuminating history of modern conservatism in the state of Texas—a conservatism that spread throughout the United States, but that began with a bullet that took

John Paul Stevens: An Independent Life by Bill Barnhart and Gene Schlickman is a scholarly and well-researched book about one of the United States Supreme Court’s most memorable justices.