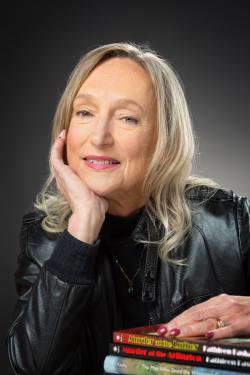 Kathleen Kaska is the author of two awarding-winning mystery series: the Sydney Lockhart Mystery Series set in the 1950s and the Classic Triviography Mystery Series, which includes The Sherlock Holmes Triviography and Quiz Book. Her first two Lockhart mysteries, Murder at the Arlington and Murder at the Luther, were selected as bonus books for the Pulpwood Queen Book Group, the largest book group in the country. Her latest Sydney Lockhart mystery, set in Austin, Texas, is Murder at the Driskill. Run Dog Run, her first mystery in the new Kate Caraway animal-rights series, was released in March 2017.

When she is not writing, she spends much of her time with her husband traveling the back roads and byways around the country, looking for new venues for her mysteries and bird watching along the Texas coast and beyond. It was her passion for birds that led to the publication The Man Who Saved the Whooping Crane: The Robert Porter Allen Story (University Press of Florida).

Ms. Kaska is a writer and marketing director for Cave Art Press. Her collection of blog posts was released in August 2017 under the title, Do You Have a Catharsis Handy? Five-Minute Writing Tips.

The Agatha Christie Triviography and Quiz Book (The Classic Mystery Triviography™ Series)
This item is no longer valid on Amazon.

The Alfred Hitchcock Triviography and Quiz Book (The Classic Mystery Triviography™ Series 2)
This item is no longer valid on Amazon.

Murder at the Arlington

Murder at the Luther
This item is no longer valid on Amazon.

The Man Who Saved the Whooping Crane: The Robert Porter Allen Story

Do You Have A Catharsis Handy?: Five-Minute Writings Tips

Nonna Maria and the Case of the Missing Bride: A Novel

“Lorenzo Carcaterra creates a warm and fuzzy read with a feel-good plot—a cozy mystery in its truest form.”

“A Lady Compromised is a complex, enthralling mystery that rivals those of Anne Perry and Agatha Christie.”

Via Negativa: A novel

“Perry is a master of the British historical novel, this time leaving the Victorian era behind and delving into a new but volatile century.”

Night Boat to Tangier: A Novel

“Reading Night Boat to Tangier, one might hear echoes of Talking Heads’ singing ‘Once in a Lifetime,’ and you ask yourself, ‘How did I get here?’”

The Collector's Apprentice: A Novel

“Shapiro does an extraordinary job merging fact with fiction, bringing not only Henry Matisse and the real Edwin Bradley into the story, but Gertrude Stein and her consort of post-Impressio

The Last Cruise: A Novel

The Queen Isabella, a dowager cruise ship, sets sail in her retirement voyage, a two-week leisurely journey from Los Angeles to Hawaii.

The Mitford Murders: A Mystery

“The Mitford Murders is the first in what promises to be an absorbing mystery series.”