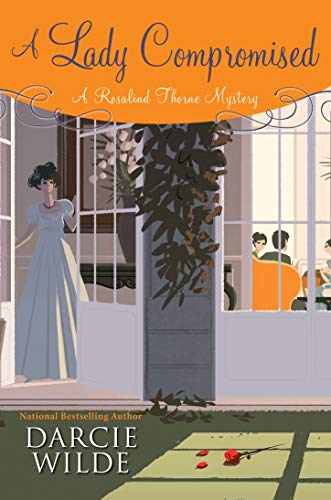 “A Lady Compromised is a complex, enthralling mystery that rivals those of Anne Perry and Agatha Christie.”

Wilde’s Rosalind Thorne Mystery Series features a woman whose social status plummeted when her ne’er-do-well father, Sir Reginald Thorne, squandered the family fortune due to his disreputable lifestyle. To make ends meet and keep one foot in the door of high society, Rosalind uses her wit and independence to carve out a professional niche by coming to the rescue of societal ladies who find themselves in precarious situations. She has successfully intervened in blackmail, theft, and murder cases, with tactful and circumspect snooping.

A Lady Compromised, the fourth novel in the series, finds Rosalind in Regency England. Devon Winterbourne, Duke of Casselmaine, invites her to Cassel House to help arrange the wedding of his cousin, Louisa Winterbourne, who also happens to be Rosalind’s friend. Racing off to the countryside to spend several weeks in a grand estate that sprawls over thousands of acres, Rosalind is both excited (she will reunite with the Duke, whom she almost married once) and nervous—she will encounter the Duke’s mother, the taciturn Dowager Lady Casselmaine, who will not be pleased having Rosalind under the same roof.

But before Rosalind leaves, a letter arrives.

Helen Corbyn, a friend of Louisa Winterbourne who will also be at Cassel House, learns of Rosalind's visit and sends a letter pleading for Rosalind to look into the dealings of her future husband, Peter Mirabeau, whom she does not trust. Helen believes he is responsible for her brother William's death even though it was ruled a suicide. William and Peter had issues. Peter refuses to speak of the incident. Then Rosalind learns that William had challenged Peter to a duel.

On the first day of her arrival, Lady Casselmaine snubs Rosalind, and the local ladies scrutinize her every word and move. Every conversation, everything Rosalind does, becomes a game to trip her up and let her know she doesn’t belong.

Darcie Wilde skillfully utilizes the era’s rules of social niceties to add to the plot’s tension. This is more evident than at dinner parties where one’s place at the table could determine a person’s future or cause their reputation to be taken down a few notches. “In general, one wished to secure a place near either the head or the foot of the table. There, one might form a closer connection with the host or hostess. No one wished to be exiled to the dreadful middle ground, because unless the host or hostess addressed the table generally, conversation was permitted only with those closest to you, and some hostesses even frowned on anyone—especially unmarried young ladies—talking with the person across the table.”

To gain information on the Mirabeau case, Rosalind must pry, prod, and pester—social niceties be damned.

Intimidation, evasion, innuendoes, manipulation, and lies only strengthen her resolve to discover the real cause of William Corbyn's death. Rosalind learns that his body was found at the location where the duel was to take place. He had been shot in the back, making suicide impossible and death by duel unlikely. Although spring guns had been used to deter poaching in the area, none had been found near the site, ruling out accidental death.

Since the story involves two actual engagements, one possible engagement, one possibly broken engagement, one secret marriage, one case of bigamy, and the arrival of an old flame, several cousins, siblings, and a few aunts, you might have to take notes to keep the characters straight. Nevertheless, A Lady Compromised is a complex, enthralling mystery that rivals those of Anne Perry and Agatha Christie.

But Rosalind Thorne still deserves a label to add to her calling card. What should it be? R. Thorne: Lady's Detective, Discretion Promised, perhaps?