Via Negativa: A novel 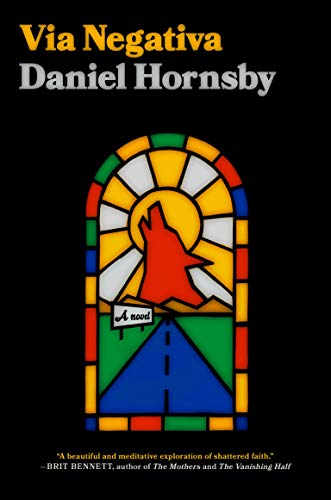 After being expelled from a retirement facility, Father Dan, now homeless, sets out on a cross-country road trip in his Toyota Camry, destined for Seattle, where he plans to connect with two old friends and lick his wounds. But instead of leaving his troubles behind, his life’s ordeals as a young seminarian and later a parish priest ride shotgun, constantly reminding him that once a priest, always a priest. That maxim, also proven by his innate inability to remove his collar, gives a plenary invitation to the people he encounters to spill their secrets by confessing their sins.

Early on his journey, Father Dan picks up a traveling companion—a coyote that was hit by a car. He sets the coyote’s broken leg, gives it half a Niravam, and makes it comfortable in the backseat. Content to riding along, being fed canned tuna, and having its bedding changed every few hours, the coyote, named Bede, by Father Dan, becomes more of a comfort than a burden—and perhaps, the only thing that keeps the priest from fading into the past where resentment and revenge fester.

The open road of the Midwest gives forth Jesus sightings: on billboards, bumper stickers, and barns. The Son of God even shows up as a 50-foot soap carving. Stops at odd roadside attractions (and a few bars) break up the monotony of the trip. In Manhattan, Kansas, a bar owner invites the good Father to try her karaoke machine. After his rendition of Prince’s “Purple Rain,” and her ordered round of applause, she gives him a bone (human, supposedly)-handled derringer she’s kept framed and hanging on the wall. After having confessed to Father Dan the gun was purchased with money she stole from her parents when she was 19, she is now ready to dispose of it.

“Could you take it?” she asks. “Find a good place to bury it? Say a prayer or something?”

Father Dan: “I drank a beer and doodled a Tammy Wynette on a coaster in the blue TV light. Another pair of men sat at the bar a few stools to my right. They were big men, meaty as Old World butchers or Irish policemen, with faces sweaty and pink like raw chicken breast.”

Farther down the road, Father Dan stops at Martin’s Hole to Hell World-Famous Bottomless Pit—a perfect place to toss the gun. There he encounters Martin, who left the Catholic church after his wife died of lupus. Not getting many tourists interested in seeing the hole, Martin invites Father Dan to dinner and introduces his young son, his teenage daughter, Anna, and “Reese Witherspoon,” the family dog who’s spooked by the hole. Dinner leads to an offer to spend the night. The priest accepts but hopes to sneak out of the house during the night to drop the gun into the pit. Intruders foil his plan, and the next morning, Father Dan is on the road again with Bede, the gun, and a stowaway. Anna decided she wanted to see Seattle.

Father Dan’s meandering isn't as random as it at first seems. He has to attend to some unfinished business: a stop in Denver to pay his respects and offer closure and condolences to the partner of a priest friend who has passed away. The visit results in Father Dan realizing he has his own emotional agenda to deal with—a Father Bruno, who is living his last days in a nursing home.

Before along, Anna gets bored and decides to return home. Alone again with Bede, the priest’s bitterness over the past builds, but so does his courage. He knows taking matters into his own hands is wrong, but Father Dan believes that the Almighty might forgive him for his decision to right a wrong.

Father Dan’s time with Bede is temporary, but not without a lesson learned—freedom comes with a price.

Hornsby does a masterful job tamping down Catholic doctrine and allowing the reader to enjoy and understand the story without religious judgment. Riding along with the priest on his journey offers the right amount of anticipation. However, with only a sprinkle of deep emotion fueling Father Dan’s fire, the story falls flat during a couple of pivotal scenes. Nevertheless, Via Negativa is well worth the read. Amen.