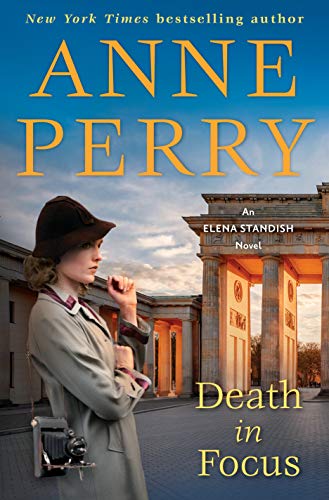 “Perry is a master of the British historical novel, this time leaving the Victorian era behind and delving into a new but volatile century.”

Another Anne Perry mystery series? Yes and, oh my yes. Death in Focus is Perry’s first mystery in the new Elena Standish series set primarily in 1933 Germany, a time when many citizens were still reeling from the Great War and in denial that another was on the horizon.

Perry is a master of the British historical novel, this time leaving the Victorian era behind and delving into a new, but volatile century. Her finesse for suspense, though not as dramatic as in her other series, works well with her new character and setting.

Elena Standish, a young British photographer who plans to use her camera to expose the atrocities occurring in Germany, promises to be a heroine of the first order. Unwillingly becoming involved in espionage, Elena finds herself in Berlin during a time when the country is starting to embrace Hitler’s ideas of creating a perfect Aryan race. Risking arrest by the Brownshirts (Nazi guards), she attends a student book-burning where classic books are being destroyed to cleanse the “world of old ideas and create new ones,” as described in the following passage:

“She could not tell whether they were men or women, but she photographed them as they were capering almost like puppets being jerked by their strings. Their faces were pale, gibbering mouths misshapen as they gaped open, eyes in the reflected flames mere black holes in their heads, red socketed. They were filled with insane ecstasy as they watched the leather, parchment, and paper burn, the passion, intellect, and hope of generations destroyed in one single night.”

The story begins with Elena and her sister Margot enjoying the spring weather on the Amalfi coast. Elena is recovering from a troubled relationship with a man who betrayed her, causing her to lose her much-coveted position in Britain’s Foreign Office—a position awarded her by her father who was a British ambassador to several European cities, including Berlin. Margot is still attempting to enjoy life after the death of her husband on the battlefront in WWI.

After Elena meets the attractive Ian Newton, her holiday then turns into a nightmare. A man is murdered in the Amalfi hotel where they are staying. Ian receives an urgent message to leave Italy and asks Elena to join him as far as Paris. On a whim, she accepts his offer, leaving only a note for Margot that briefly described her plan. Margot is incensed that her sister, once again, has let romance cloud her judgment.

On the train to Paris, Ian is attacked and killed. Before he dies, he tells Elena he is with the British Military Intelligence and must get a telegram to the British Embassy in Berlin to stop the assassination of Friedrich Scharnhorst, an outspoken instigator of the Third Reich. Elena vows to deliver the message, but cannot prevent the assassination. She then becomes a suspect and is hunted by the Nazis. Her grandfather, Lucas Standish, a former head of MI16, gets word of his granddaughter’s involvement. Struggling with keeping his position with the government secret and rescuing Elena, he fears his endeavor will not be enough to save her.

Although readers are introduced to a naive, gullible young woman who finds herself entangled in a world of espionage, Elena rises to the occasion and grows quickly into a courageous patriot who is determined to survive the mess she became involved in.

Fans of Perry’s William Monk series and her Thomas and Charlotte Pitt series might anticipate Perry's typical courtroom-drama conclusion. Still, the quick wrap-up of Death in Focus leaves the reader awaiting the next Elena Standish mystery.