Night Boat to Tangier: A Novel 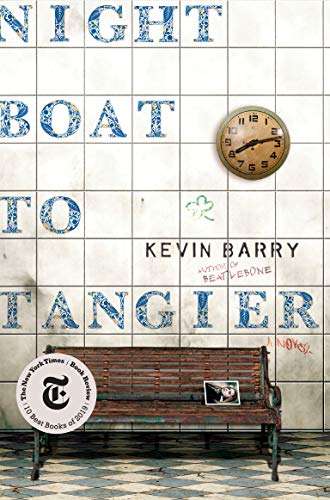 “Reading Night Boat to Tangier, one might hear echoes of Talking Heads’ singing ‘Once in a Lifetime,’ and you ask yourself, ‘How did I get here?’”

A small, pretty 23-year-old woman, Dill or Dilly, with pale green eyes, disappeared three years ago. Two Irishmen and one-time drug smugglers, Maurice Hearne, the woman’s father, and Charlie Redmond, a family friend, are waiting at the Port of Algeciras ferry terminal, watching passengers come and go between Spain and Tangier, Morocco. Word has it that Dill or Dilly might be on the ferry, her hair now in dreadlocks, possibly leading a dog on a rope. Holding vigil during the long night of October 23, 2018, in anticipation of her arrival, the two men reminisce over their past exploits as the story unfolds, slowly, like a chrysalis struggling to emerge into a full-blown moth, but never completely making it.

Readers might find it an effort getting their minds around this story. Barry does not use dialogue quotes and much of the narrative is delivered in short, jerky paragraphs. But the writing has a poetic quality as in Hearne’s repeated inquiry:

Dilly. Have you seen Dill, have you?

In an attempt to remove herself from the troubles of growing up with a drug-using, drug-dealing father and a mother who chose to end her suffering, Dilly Hearne fled to Spain. Her mission: find a place where past grief could not follow, a place where she could learn who she really was and begin a new life. From the streets of Málaga to a fleabag pension in Granada to a cave house in Albaicín district, Dilly finally found herself in a homeless camp in Tangier. The reader is told very little about Dilly’s journey, only that her new life has brought her much the same as the old one.

When Dill or Dilly disembarks the ferry, she sees Maurice and Charlie sitting on a bench by the information hatch. She turns her face as she passes by amid the throng of tourists shuffling through the terminal. Her hair is bleached and cropped short and her face is hidden under sunglasses and a hoodie. Certain she is not recognized, she goes upstairs to the bar and watches Maurice and Charlie scan the crowd.

Maurice tells Charlie one of the women could be Dilly, but believes his mind is playing tricks on him. All the people are starting to look the same. He goes on to say that if they don’t find her, she will be fine. Then the past descends again. Maurice had been in a mental institution in Cork, and was soon joined by Charlie. Now they relive the memories of their dangerous smuggling days—the losses, violence, romances, and betrayal, while Dilly continues to watch. She, too, is taking stock of her life.

When Frédérique, apparently her own drug dealer, texts with a location of the hotel where she is to stay, she decides one last time to steer her life in another direction. She tosses her phone, walks through the terminal past Maurice and Charlie, looking defiantly in their direction. They do not notice.

Reading Night Boat to Tangier, one might hear echoes of the Talking Heads’ singing “Once in a Lifetime,” and you ask yourself, “How did I get here?”