Nonna Maria and the Case of the Missing Bride: A Novel 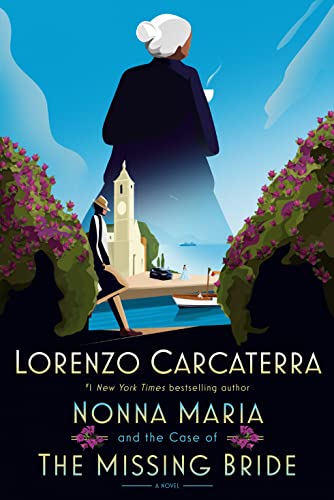 “Lorenzo Carcaterra creates a warm and fuzzy read with a feel-good plot—a cozy mystery in its truest form.”

Not much fazes espresso-drinking, crime-solving Nonna Maria, Italian widow who calmly and patiently fixes all things bad on the island of Ischia in the Gulf of Naples. Robbery, kidnapping, and smuggling seem mere annoyances to this seventy-something, whose widow’s weeds are as much a part of her persona as homemade pasta and chilled white wine.

At first appearance, life on the tiny island seems serene, immune from big city problems, except for what the tourists drag in. Nonna Maria grew up on the island. Her house sits in a small piazza half a block from the beach—a beach she’s never visited. St. Peter’s Church is always open, but the closest Nonna Maria comes to attending service is the stone wall across from the church, where she sits listening to choir hymns floating out on incense.

“I like the saints,” she once told her daughter Francesca. “From what I’ve heard about them, they were good people who tried their best to help those in need. It’s easy to believe in someone like that. Popes, on the other hand, I have no use for.” If the locals have problems, they know to knock on the Nonna Maria’s door. (She doesn’t have a phone.) And if it’s a tough problem, she prays to these saints for guidance.

The story unfolds when a young woman, Anna, becomes enamored with a dashing young tourist. After their first date, Anna’s mind turns foggy for a few days. When it clears, she finds herself engaged to a man she barely knows. Anna doesn’t want to shame her family, but she can’t marry a man she doesn’t love. Nonna Maria suspects Anna is a victim of the La Fattura, a centuries-old, spell-induced potion that’s secreted in food or drink. In Anna’s case, it is the chocolate gelato served to her by her fiancé, the nefarious Andrea Bartoli. Until Nonna Maria can set things right, she hides Anna from her fiancé and her family.

In the meantime, tour-boat captain Pasquale Favorini, who’s spent more time on the water than land, is believed to have fallen from his boat and drowned, a theory that’s impossible for Nonna Maria to swallow. True, the old man is a heavy drinker. Still, everyone knows that even an intoxicated Favorini could handle a boat in any weather or nautical situation. Suspicion of wrongdoing falls to first-mate Giovanni Buonopana, who claims he was asleep when his employer went overboard. Captain Murino of the local carabinieri cannot discover evidence of any crime and is ready to proclaim Favorini’s death an accident. Nonna Maria knows better and badgers Murino to continue investigating.

Instinct and intuition cause Nonna Maria to believe that Andrea Bartoli’s motives for wanting to marry Anna have nothing to do with love, and that the circumstances surrounding Favorini’s death are the result of a criminal element that has settled on the island. To get to the bottom of these two conundrums, Nonna Maria turns to Ischia’s underworld for help.

What first seems like an unassuming story turns out to be a well-plotted mystery. During several tense situations, a surprise character steps into the scene and quickly diffuses approaching trouble. The ending is easy to figure out, but that’s okay. If you’re looking for a story that will have your heart racing, you'll be disappointed. But if you are in the mood for endearing characters, a picturesque setting, and a read that makes you feel happy to be alive, it doesn’t get much better than Nonna Maria and the Case of the Missing Bride. Lorenzo Carcaterra creates a warm and fuzzy read with a feel-good plot—a cozy mystery in its truest form.