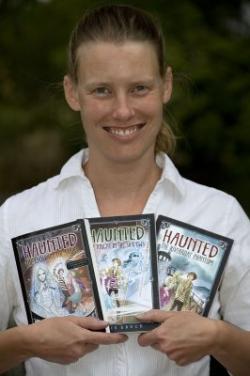 Chris Eboch is the author of 12 books for young people. Her Haunted series follows a brother and sister who travel with their parents’ ghost hunter TV show. They try to help the ghosts, while keeping their activities secret from meddling grownups. The Ghost on the Stairs is set at a hotel haunted by a 19th-century ghost bride who is still waiting for her missing husband. The Riverboat Phantom features a steamboat pilot still trying to prevent a long-ago disaster. In The Knight in the Shadows, a Renaissance French squire protects a sword on display at a New York City museum.   Eboch is also the author of The Well of Sacrifice, a middle-grade Mayan adventure, used in many schools and praised by Kirkus Reviews as “[An] engrossing first novel . . . [that] shines not only for a faithful recreation of an unfamiliar, ancient world, but also for the introduction of a brave, likable and determined heroine.”   Her other books include nonfiction and two inspirational biographies in the Childhood of Famous Americans series, Jesse Owens: Young Record Breaker, and Milton Hershey: Young Chocolatier, written under the name M. M. Eboch. Her writing articles have appeared in Writer’s Digest, Children’s Writer, and Byline.

The Well of Sacrifice

The Ghost on the Stairs (Haunted)

The Knight in the Shadows (Haunted)

“The premise is an intriguing one—a cop and a robber, on the run together. . . . The action never slows, which is both a plus and a minus.

“Some African American families today broom jump at their weddings in memory of their slave history.

Which Side Are You On? The Story of a Song

“Which Side Are You On? provides an educational opportunity through a dramatic and enjoyable story.

“While some famous authors seem to go downhill later in their career, getting lazy or sloppy, Ms. Roberts has improved over time, getting better at character development . . .”

Phineas and Ferb: How to Conquer the Tri-State Area (by Heinz Doofenshmirtz)

“Phineas and Ferb” is a popular animated children’s series on the Disney Channel.

Millions of girls love horses, whether they have a chance to ride or can only read about it. They make up the target audience for The Pony Whisperer series.

Does it seem like young people are fused to their cell phones these days? That’s just what happens to eighth-grader Samantha Granger through a series of outrageous coincidences.

The Memory Bank starts quickly, introducing Hope Scroggins and her little sister Honey, as their parents kick Honey out of the car at the side of the road in punishment for laughing. 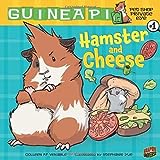 Hamster and Cheese, the first book in the Guinea PIG, Pet Shop Private Eye series, is a slim, 7x7-inch paperback that stands somewhere between a picture book and a standard graphic novel.

John Grisham is famous for his two-dozen bestselling adult thrillers, including The Firm, The Pelican Brief, and The Client.

Rick Riordan has written for both children and adults, but is probably most known today for his best-selling Percy Jackson and the Olympians series.

In The Sandwich Swap’s author’s note, Her Majesty Queen Rania of Jordan Al Abdullah describes an experience she had in nursery school.

Emily the Strange: Stranger and Stranger

Emily the Strange made her first appearance in a graphic novel, and the franchise now includes novels, artwork, toys, clothing, and “accessories” ranging from jewelry to footwear to a Zippo lighter