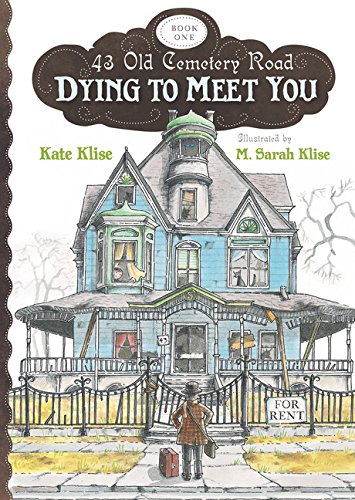 (Harcourt Children’s Books, April 2009) Grumpy old Ignatius B. Grumply rents a dilapidated Victorian mansion, hoping for peace and quiet so he can break through a 20-year-old case of writer’s block. The house already has two occupants, though. Eleven-year-old Seymour was left behind while his ghost-hunting parents went on a European tour. Olive, the ghost of the woman who built the house, is a frustrated writer who swore to stick around until one of her manuscripts got published. They are not happy about the cranky new resident. Since Grumply doesn’t believe in ghosts, he blames Seymour for slamming doors and playing the piano at odd hours. Olive protects Seymour and teases the newcomer, until she starts to feel sorry for Grumply and tries to bridge the gap between them all. The first in the 43 Old Cemetery Road series, Dying to Meet You claims to be “a collection of actual letters and documents written over the course of one summer.” The format of short letters between characters, with occasional newspaper clippings and drawings, allows young readers to play detective as they try to figure out what’s really going on. The book may also be appealing to reluctant readers, as they can feel like they are reading “a real book” of 150 pages, without a lot of dense text. However, the format has a drawback in that it takes the reader longer to get to know the characters, since we see only the way they choose to express themselves to each other. In addition, the main character is a grumpy old man, hardly an appealing hero. Still, the intriguing setup and fast pace may keep readers around long enough to get to know the very likable Seymour and Olive. Secondary characters, such as the real estate agent trying to sell the house, and the publisher demanding Grumply’s next book, add complications, though these are overcome with surprising ease. A careful reader will note many puns in the form of character names, such as the lawyer E. Gadds and real estate agent Anita Sale. The simple line drawings, meant to be by Seymour, are appealing and add additional touches of humor. Dying to Meet You touches on themes of what it means to be a family, as well as forgiveness and opening one’s heart. With two writers and a young illustrator as the main characters, and the book’s claim to be a true story, this could also be used in the classroom for a discussion of writing and publishing. The trio’s story continues in My Dead Body: 43 Old Cemetery Road: Book 2, (October 2009). Sisters Kate and Sarah Klise have collaborated on previous books as well, such as Regarding the Fountain, another story told through letters, postcards, memos, and transcripts. Reviewer Chris Eboch is the author of many children’s books including the Haunted series for ages 9 to 12: The Ghost on the Stairs, The Riverboat Phantom, and The Knight in the Shadows (Aladdin).