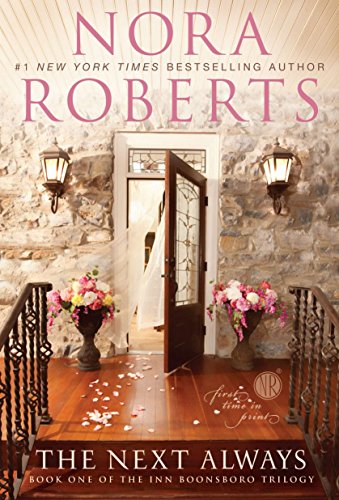 “While some famous authors seem to go downhill later in their career, getting lazy or sloppy, Ms. Roberts has improved over time, getting better at character development . . .”

Architect Beckett Montgomery is busy renovating a hotel and yearning for the girl he’s wanted since he was 15. Lovely Clare is back home and available after losing her husband to the war in Iraq, but she now comes with complications—in the form of her three little boys.

Nora Roberts fans will note some familiar elements in The Next Always, such as the three female friends set up to each star in their own book, and the three handsome brothers who are surely destined to be their true loves. Familiarity does not breed contempt, however, as the characters are likable and sympathetic, in a relaxed, small-town setting that is peopled with quirky minor characters and described in loving detail.

A stalker fixated on Clare provides some danger and creepy chills. A ghost also plays a part, haunting the historic hotel in BoonsBoro, Maryland, which the Montgomery family is remodeling. This paranormal element should not discourage those who prefer their romances realistic. Though the ghost does play a part in the action of the finale, she is a relatively minor presence and her greater role is how she prods Clare to take a look at some of her own feelings.

The core of this book is two ordinary people falling in love. Their everyday challenges include demanding work hours and the needs of Clare’s young children. Ms. Roberts obviously knows and loves little boys, without idealizing them. Her child characters are not simply props to be used for plot purposes and then ignored when convenient. Nor are they all little angels. Clare says about motherhood, “Some days I feel like the ringmaster in a three-ring circus inhabited by demons.” The boys in The Next Always are lovable, but they’re not always easy.

The adult men in the story are equally realistic; they’re sexy and likable but sometimes annoying and bossy. The Montgomery men swear and give each other a hard time, like real brothers, though their underlying loyalty shines through. Ms. Roberts had brothers and raised two sons of her own, and she clearly understands that men do not have to be idealized to win a woman’s love.

Beckett and Clare have their misunderstandings and awkward moments along with their tenderness and passion. Readers can enjoy the humorous moments of their flirtation, such as when Beckett describes the luxurious details planned for the inn, from oil-rubbed bronze fixtures to heated towel racks, in such loving detail that it becomes a kind of foreplay to busy mom Clare. Things really heat up when they can steal a few hours alone together, resulting in moderately explicit sex scenes.

Nora Roberts is a superstar of romance fiction, with 173 New York Times bestsellers as of June 2010, according to her website. While some famous authors seem to go downhill later in their career, getting lazy or sloppy, Ms. Roberts has improved over time, getting better at character development and pasting. She has also explored new genres beyond her original category romances, including gripping, action-packed romantic suspense, and futuristic suspense written under the name J. D. Robb. The Next Always is a simpler story, but no less appealing.

As an interesting side note, the historic hotel in the novel, Inn BoonsBoro, is a real place in Maryland, owned by Ms. Roberts.