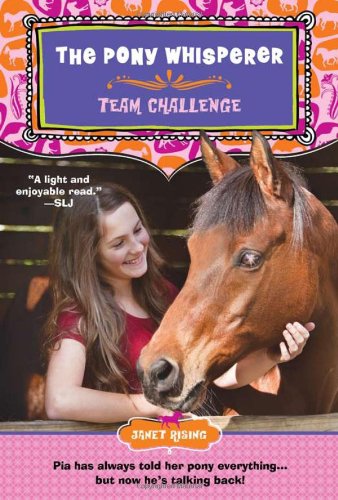 Millions of girls love horses, whether they have a chance to ride or can only read about it. They make up the target audience for The Pony Whisperer series. Author Janet Rising is the editor of a British horse magazine for teenagers, PONY. Her experience with horses, and her love for both horses and young riders, comes through in this middle-grade series.

The reader immediately enters a world of girls who know and love horses. Terminology is rarely defined, so readers who are not already familiar with riding terms may struggle to follow some of the dialogue and descriptions, but young riders will appreciate the detailed and accurate portrayal of their world.

Horse series for girls have been around for decades (The Saddle Club, Pony-Crazed Princess, the Sneaky Pony Series, Big Apple Barn, Stablemates, Horse Crazy, Horse Diaries). The clever twist here is that the main character can literally talk to ponies and horses, thanks to a tiny magical statue. She discovers this gift— and the problems accompanying it—in book one, The Word on the Yard, when she moves to a new town after her parents’ divorce.

In Team Challenge, the second book, Pia still feels like the new girl, but she gets invited to participate in a team riding challenge with two girls and a boy from her horse’s stable. The four members of the team have to work together and overcome challenges ranging from the logistics of getting to a distant event site, to debating whether using Pia’s magical gift is cheating.

Other than the basic premise of the statute magically allowing Pia to communicate with the ponies, the story is realistic. Pia experiences the ups and downs of adolescence. Like any basically good but imperfect girl, she feels hurt when left out by friends or ignored by parents, and she can feel both jealousy and sympathy for her opponents. She struggles to remain open-minded and optimistic about her father’s girlfriend and her mother’s new boyfriend. She speaks up when mom isn’t being treated right, but doesn’t stand up for herself as easily. She’s a likable, average girl, one of the most realistic in modern middle-grade fiction.

The voice is a friendly first-person, sometimes directly addressing the reader (“I was going to tell you about Catriona, wasn’t I?”), as Pia makes humorous observations on the world around her. She’s especially biting when it comes to her parents’ romances.

The secondary characters are not always as well drawn—not surprising considering the enormous cast. Sixteen characters (human and horse) are introduced in the first chapter, which is especially confusing when Cat and Bean are human, while Bambi and Mr. Higgins are horses. The obligatory mean girl causes trouble, but fortunately has a relatively small role, and hints of a secret (presumably to be revealed in a future book) suggest that she may have reasons for her nasty behavior.

Parental characters range from easy-going to overbearing to just plain annoying. The horses have their own personalities and sometimes cause trouble, while also teaching lessons, such as the idea that kindness and praise get better results than criticism.

Readers who haven’t yet read the first book may struggle to catch up, with all the names and background quickly tossed in the first chapter, but it is still engaging, with a goal and its associated challenges set up early. Pia and her friends face enough complications along the way to keep the story moving.

The Pony Whisperer: Team Challenge is a quick read, a page-turner that makes it hard to guess how the competition will end.

The Pony Whisperer series debuted in the UK and is now being released in the US, with the third in the series scheduled for June 2011.