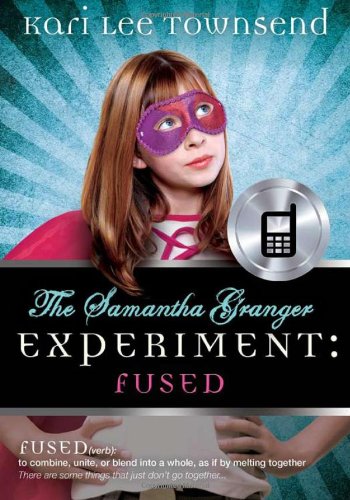 Does it seem like young people are fused to their cell phones these days? That’s just what happens to eighth-grader Samantha Granger through a series of outrageous coincidences. As soon as we meet Sam—talking on the cell phone with her best friend while lost in the woods—we hear that she’s the “Queen of Technology, who gets the latest of everything.” That’s small consolation for the new girl in town, who’s worried about making friends and is miserable about her parents’ separation.

Life gets even more complicated when Sam stumbles across a mysterious glowing crystal from space and gives in to the urge to touch it. The resulting radioactive energy surge leaves her fused with her cell phone. But not just any cell phone: a top-secret military gadget her mom gave her by mistake.

Now Sam can download information from the Internet and send complex instructions straight to her muscles, which is handy if sometimes embarrassing at school and soccer practice. She can also see in the dark, zoom her vision into close-up, and even record sound and video. Having her hand light up and ring when she gets a phone call or text message is awkward, though. And when she gets too close to her crush, her overactive hormones send her system crazy, causing her to intercept 911 calls and intervene against her will. Suddenly the girl who just wants to fit in is an undercover superhero.

Sam starts out high-strung and overly emotional, obsessively focused on fashion and boys. That could get old fast, but we quickly move into the action, and Sam gets more likable as she meets challenges with creativity and panache. The novel has plenty of complications and plot twists. They may not always be believable, but they keep things moving. The wacky humor is equally appealing. For example, Sam struggles to come up with a cool superhero name and gets constantly misunderstood, so Hard Wired becomes Harry Weird.

The story can be hard to follow in places. Sam’s narration sometimes jumps without a transition to tell us how much time has passed, and it’s hard to keep track of the mysterious secondary characters lurking around—Dark Shades Man, Tall Guy and Short Guy, random science guys. Sam’s parents are such polar opposites that it’s hard to imagine they were ever happy together. They are also surprisingly slow to intervene when Sam is clearly in trouble, especially when Mom is introduced as excessively safety conscious. It’s also not clear why Sam doesn’t confide in her wonderful grandmother earlier, when Grandma is so supportive and understanding, and Sam is terrified that the bizarre accident is killing her. But of course, Sam needs to keep her secret to maintain the story drama, and realism isn’t the top consideration for this story.

At least Sam’s friends and family members are clearly drawn. Her friends are likable and realistic, and the science nerd turns out to be a surprising ally. Sam has the standard clichéd rival at school: beautiful, wealthy, mean, and out to steal Sam’s crush. We don’t get to know the crush all that well, but that’s realistic for eighth-grade boy-girl interactions.

This is definitely a book targeted at girls. Many will identify with Sam’s interests and fears, as she narrates her life in the first-person. Boys might enjoy the action and science fiction aspects, but probably won’t get past the girly opening. By the third page, we learn everything Sam is wearing, down to her black leather ballet flats with green satin ribbon. This regard for current fashion and the use of pop cultural details means the book likely won’t age well. It’s a fun and timely concept for now, though.

FUSED is set up as the first in a series, so girls who like action and humor may have found a new superhero to follow.