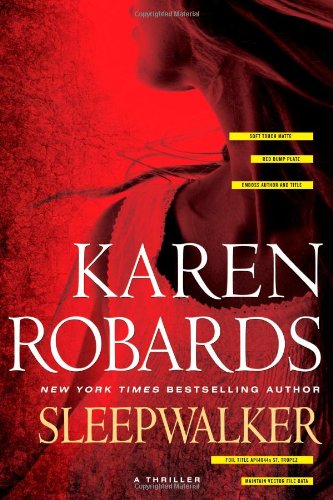 “The premise is an intriguing one—a cop and a robber, on the run together. . . . The action never slows, which is both a plus and a minus. The pacing is strong, with lots of cliffhanger chapter endings, but after a while all the running gets tedious.”

The sleepwalker of the title refers to heroine Micayla “Mick” Lange who sleepwalks during nightmares reliving the horror of her mother’s murder. That’s a minor aspect of the plot, though, that centers around a burglary that takes a strange twist. Mick, now a Detroit police officer, is housesitting for a longtime family friend when she awakes from a sleepwalking episode to hear an intruder.

Rather than calling for backup from the extensive security team on the property, she tries to take him down herself, a bit of foolishness needed to get the story rolling. A pitched battle ensues, during which some papers are scattered. When Mick sees photos of a murder and realizes the rumors about her beloved “Uncle” Nicco’s involvement in crime are true, she decides to flee with the burglar until she can arrest him and report the evidence she’s found.

The premise is an intriguing one—a cop and a robber, on the run together. Mick makes no secret of the fact that she’s hoping to arrest Jason at the first opportunity, but for the moment they are better off together. The action never slows, which is both a plus and a minus. The pacing is strong, with lots of cliffhanger chapter endings, but after a while all the running gets tedious.

The first 270 pages cover just one day of nonstop action. Fans of thrillers should enjoy all the twists and turns, but those who prefer their romantic suspense novels with a heavy dose of believable romance may find the relationship development lacking.

So far as you get to know the characters, they are both likable. Mick is fierce and feisty, a kick-butt heroine who never backs down, yet with an appealing underlying vulnerability.

It takes a lot longer to get to know Jason at all. He shows some courage and honor, but of course he’s not about to open up to a cop. As the book is largely told from Mick’s point of view, we are dependent on her interpretation of him, which is basically that he’s hot but a crook. There is entertainment in seeing the two try to resist their physical attraction since they don’t trust each other.

Unfortunately, with no time for the relationship to develop, Karen Robards is dependent on romance clichés, such as his touch causing her to tingle because of their remarkable chemistry. At least Ms. Robards allows Mick to keep her sense of honor and fierce independence even after passion temporarily overwhelms her.

Setting this book in winter adds additional physical challenges, and Ms. Robards captures the misery of the cold well enough to cause sympathetic shivering in the reader. That alone makes Sleepwalker a good book for a stormy night, in which the reader can enjoy being safe inside, perhaps with a warm blanket and a hot beverage, as Mick and Jason battle the elements, the villains—and often each other.