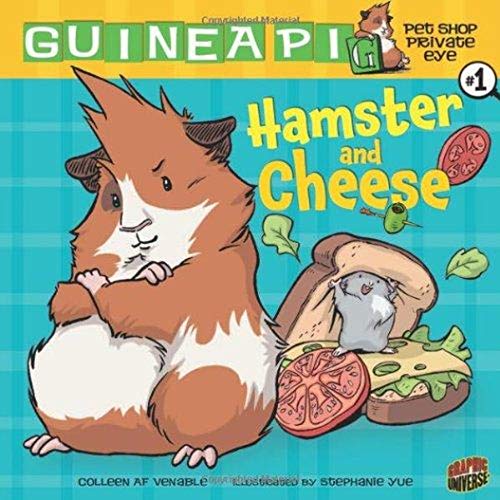 Hamster and Cheese, the first book in the Guinea PIG, Pet Shop Private Eye series, is a slim, 7x7-inch paperback that stands somewhere between a picture book and a standard graphic novel. It opens with a sequence of images, comic book style, of Mr. Venezi’s Pets & Stuff shop and some of the animal cages there. Labels identify llamas, walruses, moose, and three-toed sloth. But the pet shop isn’t really that exotic—Mr. Venezi just has a problem with correctly identifying his snakes, mice, hamsters, and fish.

We also get a look at our reluctant hero, a guinea pig reading a book (who for some reason is correctly identified). When Mr. Venezi slams the door on his way out, the final “G” falls off the GUINEA PIG sign, causing it to read GUINEA PI. A desperate hamster asks the “private eye” for help, and refuses to take her gruff no for an answer. And thus a great friendship is born . . . at least in the eyes of Hamisher the hamster. Sasspants the guinea pig just wants to be left alone, and only agrees to help in order to get Hamisher to shut up.

Together the fuzzy heroes try to solve the mystery: Who’s been taking Mr. Venezi’s sandwiches? He’s blaming the koalas—hamsters, really —and threatening to send them away. The rest of the pet store’s zany animals aren’t much help in the investigation, though they provide plenty of humor and the occasional red herring.

The mystery itself is a bit slight, and the ending could have been set up better, but humor carries the book. The simple story will provide readers with plenty of smiles, and probably a few out-loud chuckles. It’s especially appealing for reluctant readers because of the low word count and supporting visuals. The publisher lists the book as having a Reading Level of Grade 3 and an Interest Level of Grades 2–5. Readers at the older end of the spectrum may feel embarrassed to carry around a mere 48-page book, but at least the graphic novel format makes it more “comic book” and less “kiddie book.”

We don’t learn until page 15 that Sasspants is female. Kudos to the illustrator for not giving the guinea PI long eyelashes or a hair bow, the typical cartoon gender identifiers. But noting her gender earlier would save readers from making an assumption, and then getting jarred by the truth. A few other confusing spots are quickly forgotten with all the entertainment.

Young readers will likely speed through the story on the first reading. Small visual surprises, such as a reading light made from a thimble in Sasspants’ cage, reward additional, deeper explorations of the book. Some of the jokes will appeal more to adults than kids, like Hamisher suddenly turning up dressed like Andy Warhol when sketching a subject, but kids won’t need to catch every nuance to have a blast.

After the story, a back page gives additional information about some of the animals. Some readers may skip this section, because at a glance it looks educational. Far from encyclopedic entries, these are humorous tidbits such as “Snakes are carnivores, which means they ONLY eat meat. Omnivores, such as human beings, eat burgers AND fries.”

The author, who studied English and Studio Art, has a job designing graphic novels for First Second Books. Though Colleen A. F. Venable didn’t illustrate this book, her background may explain why she so successfully created the graphic novel script. Stephanie Yue, a young illustrator and comic artist, seems to be new to children’s books, but her artistic style is a natural for the format. The artwork blends perfectly with the story, making an appealing unified whole. A variety of angles, close-ups and distance shots, and the occasional circular frame, keep the artwork varied and interesting. Most of all, like the text, the art is just plain funny and cute.

Libraries might find it a challenge to shelve this book, as its slim spine will get lost among other books, and most libraries don’t have a graphic novel section for younger kids. But at $6.95, it’s a cheap buy for the home, especially since it can reward multiple readings. Teachers and librarians may also want to direct their elementary school struggling readers toward the book.

The second Pet Shop Private Eye offering, And Then There Were Gnomes, is due out in November. Expect this fuzzy duo to stick around for a while.

Reviewer Chris Eboch is the author of the Haunted series for ages 8–12, where two siblings try to help troubled ghosts. The series includes The Ghost on the Stairs, The Riverboat Phantom and The Knight in the Shadows.