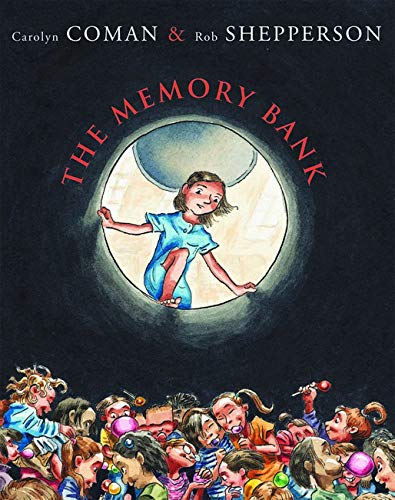 The Memory Bank starts quickly, introducing Hope Scroggins and her little sister Honey, as their parents kick Honey out of the car at the side of the road in punishment for laughing. Hope begs her parents to find Honey, but they’d rather forget the little girl. Hope is appealing in her devoted love of her sister, but oddly passive. When her parents refuse to look for Honey, Hope “calls it quits” and spends all her time sleeping and dreaming.

Circumstances drive the story forward despite Hope’s lethargy. A strange letter arrives with a warning Hope doesn’t understand, and then a man shows up to deliver her to The Memory Bank. Thus Hope enters a bizarre world where memories and dreams are collected, filed, and saved. She meets an entertaining cast of characters and learns about the inner workings of this intriguing place. Here the story is reminiscent of Roald Dahl’s work, in particular Charlie and the Chocolate Factory, where the kids explore a fascinating world. Readers are encouraged to ponder the uses of dreams and memories, and to consider the arguments different characters make about the value of each.

The Memory Bank has only modest tension, as Hope is not actively pursuing a goal. She wants to reunite with Honey, or at least find her memories, but this drive is overshadowed by exploring the world of the Memory Bank. Despite the seriousness of a lost child, the plot ambles at a leisurely pace, as Hope spends more time waiting for something to happen than aggressively trying to find her sister. We might worry about Honey, except that the pages of illustrations breaking up Hope’s adventure show Honey happily playing with other children. We don’t know exactly where she is or what’s going on, but we don’t worry about her too much. Sterling Prion, the stuffy head of the Memory Vault, warns about a rebellious group known as the Clean Slate Gang, which wants to destroy the Memory Bank. They cause some disruption, but for all the talk of a war, we see minimal drama or threat.

While The Memory Bank could use more dramatic action, it has appeal in the creative world presented. The lovely black-and-white drawings add humor and mystery, and make the book a quick read, since perhaps half of the 260 pages are illustration rather than text. Readers can explore the illustrations, perhaps trying to solve the mystery of Honey’s whereabouts themselves. This is another example of a book that falls somewhere between a novel and a graphic novel, a growing trend that may have its roots in the 2008 Caldecott Medal Winner, The Invention of Hugo Cabret, by Brian Selznick. While not exactly a page-turner, this curious story—part mystery, part fantasy—may appeal to readers who have the patience to explore and ponder an unusual world.