Epidemic of the Living Dead 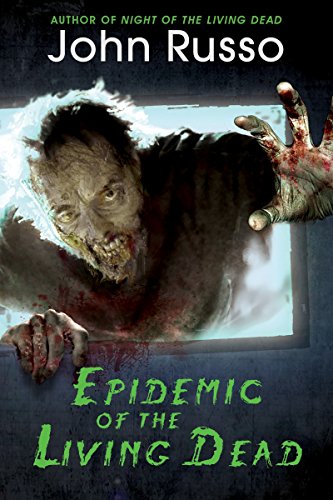 Now, in 2018, Russo has once again dug up the cadavers and given the world a zombie novel called Epidemic of the Living Dead. Like a majority of Russo’s other work, both on-screen and off, Epidemic of the Living Dead is set in small-town Western Pennsylvania. The epidemic of the novel’s title is mostly referred to as simply “the plague,” and several characters treat the problem of shambling, cannibalistic corpses as just another disease. The problem is that this disease keeps showing up again and again.

In this first outbreak, Detective Bill Curtis and his superior Pete Danko use their Glock pistols and riot shotguns to put down the walking dead at a rock and roll nightclub. This outbreak was caused by members of the shock heavy metal band The Hateful Dead using zombie-tainted syringes to shoot up heroin. Soon enough, the telltale signs of zombism—blackened, spider web-like veins and pale skin—appear on the band members. In no time they start chomping on their scantily clad groupies and unfortunate concert attendees.

Sixteen years go by between this outbreak and the next. These two outbreaks make up less than 15% of Epidemic of Living Dead. For the most part, Russo’s novel is a melodrama about exhausted parents, worried townsfolk, and a running commentary about the “ignorance” of superstition and religion in the face of a disease. At times, Russo’s moralizing can be a bit ham-handed, and the political digressions in Epidemic of the Living Dead may turn off some horror purists.

Another point of possible contention is Russo’s uses of non-zombie antagonists. Vampires make their appearance in Epidemic of the Living Dead, although these vampires are not vampires in any traditional sense. They want blood, yes, but they can go outside in the sun, they age, and their condition is predicated on earlier zombie bites that they received while they were still in the womb. Also, they don’t just bite necks; they bite ribs, stomachs, and any other exposed body part.

Epidemic of the Living Dead has no conclusive ending, so be forewarned. Russo’s novel is fun and easy to read, but ultimately, the zombie character may be best consumed on a screen, not on the printed page. Zombies cannot talk, nor do they have motivations other than to eat. The compelling character here is Detective Curtis, an atheist who raises one of the infected. Similarly, the amoral war veteran Danko, who delights in torture, is the dark side of Curtis in every way.

Russo deserves credit for being arguably the greatest zombie scribe in history, but for as good as Epidemic of the Living Dead is, it does not transcend the limitations of the popular potboiler. As such, Russo’s latest work is for diehard horror fans only, especially those already in the grasp of undead madness.