Inside the Outbreaks: The Elite Medical Detectives of the Epidemic Intelligence Service 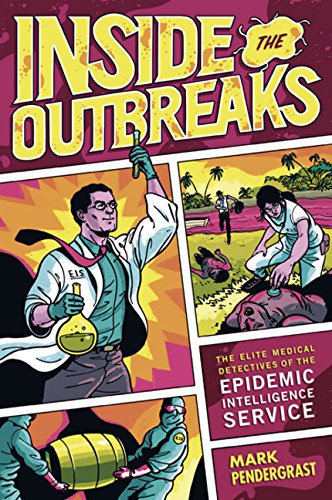 Inside the Outbreaks is a unique book in that it aims to chronicle the adventures of the elite “Epidemic Intelligence Service,” but its scope turns out to be far wider.  It is perhaps not aimed at the average reader, but at the many medical specialists associated in any manner with the intriguing phenomena of epidemics and the work of medical detectives. The author has employed simple language and a reader-friendly tone throughout, despite his use of the daunting nomenclature of diseases, viruses, and medical procedures.

One major drawback seems to be the reader’s feeling of a disconnect between hundreds of case stories collected here.  Though chapters have been given names, presumably thematic, often there is nothing in common between, let’s say a small pox outbreak and some unnamed disease that the detectives could not spend too much time upon. By the end of the book, one gets the feeling that one has browsed through a giant synopsis. Some of the case studies run into a page and a half or two, but some are as terse as half a page.

Pendergrast has tried to paint on a huge canvas, having extended the coverage of routine diseases and epidemics to include such of some unusual epidemics today e.g. smoking, obesity, and gun-culture. However, the same ambitious attempt to gather too many epidemics in one tome causes the quantity versus quality problem. One gets the feeling that the author has prepared an enormous list with a few lines to explain each topic.

There is a welcome break on the human coverage in the stories. Dr. Alexander Langmuir, the larger than life hero of these stories, whose character has been scripted almost in a Hollywood blockbuster style, starts to come alive from the first few pages. His military-general style treatment of every crisis is impressive, so are his bullying tactics and a diehard attitude toward eradication of stubborn diseases such as small pox. Psychologically, the reader starts to support his by-hook-or-by-crook policies as they are ultimately geared to alleviating deadly epidemics. There is the element of thrill and suspense too, as many battles with fearsome epidemics are set in remote locales, where crooked politics and war loom large. Humanitarian crises and disasters, even when glimpsed through brief passages, leave the reader feeling a sense of utter helplessness—we tend to sympathize with these modern missionaries of good hope. Their methodologies and attitudes are often likened to those of soldiers in a combat zone, but their successes are heart-warming. Their efforts, whenever abandoned for multiple reasons, give hope as well because, in the future, we expect these detectives to return armed with better vaccines, better equipment, and even more funding.

Patient biological research that results in development of new vaccines has been chronicled well by Pendergrast, with the human angle making these pithy stories intriguing and lucid. As vaccine development has always been done commercially on a large scale, the taut suspense never slackens as each stakeholder seems to be running against time. Their small victories and losses make the reader empathize with their predicaments, perseverance, and final successes. The global medical community seems far from the pinnacle of success when some really nasty epidemics are detected, cornered, and attacked. For instance, the wide variety of bird flu viruses metamorphosing into several other derivative illnesses still eludes global control, and some epidemics have made depressing comebacks. The United Nations and its relief efforts pales in comparison to these medical detectives’.

A built-in advantage of this easy-going tone used by the author is the flow of complex medical terminology that reads easily.  Pendergrast covers everything from the complexity of fighting epidemics in hostile terrain to geography, climate, cultural aspects, governmental attitudes, war, famine, and other natural or manmade disasters—all negative factors contributing to the slowing down or sabotaging the detection of and battle against epidemics. EIS, so often successful, surely will get plenty of positive image building thanks to this chronicle.

Scientifically there seem to be no errors, and the precision employed in use of medical terms, methodologies, and diagnostic equipment is very good.  The use of allied disciplines now part of medical sciences, such as psychology, also appears very apt and concise.

Pendergrast could perhaps write another book to deal with the non-conventional epidemics such as obesity and gun control, and the list could go on to many more related topics. Violence has already been listed by the United States as a global phenomenon that starts from home and crosses entire communities, states, and nations. It has probably crossed the limits of pandemic proportions, and its cost is staggering.  We are surely living through very complex times, and such books help define the often shadowy threats of disease and show a way toward elimination of future epidemics.

On the whole, Inside the Outbreaks promises a multi-course meal but seems to offer only a morsel or two, just for the tasting. Perhaps it could have been written with greater focus on a smaller number of topics involving only a handful of better developed case studies.

Reviewer Maxi Babi is a scientist and freelance author.