Clean: The New Science of Skin 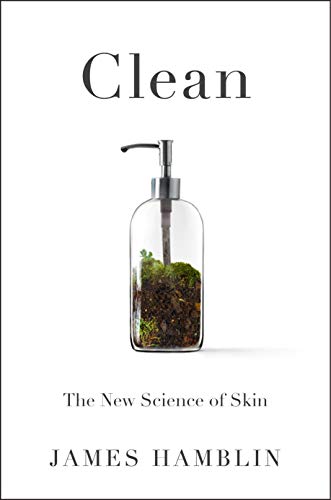 “The book’s underlying thesis is simple: The skin is a living, permeable ‘dynamic interface,’ ‘a complex, diverse ecosystem.’”

“Five years ago, I stopped showering.” So begins James Hamblin’s engaging and informative study of what it means to be clean. Posing this apparently simple issue raises more challenging issues, including the physical nature of our human skin (especially skin microbiomes) and the role of the trillion-dollar skin care market on our health.

The author had recently relocated from Los Angeles to a cramped studio apartment in Park Slope, Brooklyn, giving up medicine to pursue a career as a journalist. Reassessing his use of time and expenses, he stopped showering and applying soap and shampoo. He notes that if someone spends 30 minutes per day clearing one’s self, you will use over 18,000 hours or two years of your life.

“I still get me hair wet occasionally,” Hamblin admits. “[B]ut I quit shampooing or conditioning, or using soap, except on my hands.” He warns readers, “I’m not here to recommend this approach to everyone. In a lot of ways it was terrible. But it also changed my life.”

Clean is more than the rantings of a postmodern urban hobo. In addition to a careful critique of how Americans obsess about cleanliness, he offers valuable information and insight into the complex nature of the skin, the history of cleanliness and the business of skin care.

In an extensive discussion of the physical and biological nature of the skin,

Hamblin reminds readers that the skin is the largest organ. He repeatedly stresses that it is extremely resilient to environmental forces—including, as he admits, “our constant needs to apply topicals.”

(One of the surprising factoids that makes the book engaging is the report that the cells that compose the outer layer of our skin last about a month and that about a million or so are shed each day. This dead skin is what fills most of our homes as dust.)

The book’s underlying thesis is simple: The skin is a living, permeable “dynamic interface,” “a complex, diverse ecosystem” and not, as we all-too-often consider it, merely a barrier that should be sterile and pristine.

Hamblin argues convincingly that we engage in too much cleaning with soap and other cleanliness products. By doing this, we wash away both the body’s natural oils as well as the innumerable microorganisms that make our skin their home. Thus, over cleaning disrupts the natural ecology of the living body.

The author reminds readers that cosmetics are not foods nor medicines, and are, therefore, not regulated. Such products can be sold without having to have them approved without health and/or safety regulation. Manufacturers can claim that their products can improve or maintain personal health. He notes that the EU has banned or restricted 1,500 chemicals used in personal-care products while in the U.S. has restricted only 11 ingredients.

To reveal the absurdity of this situation, Hamblin started his own skin-care company dubbed Brunson + Sterling; its motto was: “Menscare for Fucking Perfect Skin.” He said it offered a mix of random ingredients in two-ounce bottles for $200 each. With no real marketing push, he didn’t sell anything but showed how easy—and legal—it was to start such a venture.

Hamblin traces the evolution of our contemporary notion of personal cleanliness to the larger issue of public health and hygiene. He traces this process to the ancient Egyptians and Greeks as well as the horrendous conditions Europeans faced during the Middle Ages.

The rise of industrial revolution during the by early 19th century saw enormous population increases in major cities like New York and London. However, with increased population came a rash of epidemics like cholera that swept through industrial slums. The working class was known as the “Great Unwashed.” The rise of personal hygiene accompanied the rise of more prosperous classes and social status and helped propel the soap industry forward.

Florence Nightingale played a critical role developing not only nursing as a profession but fashion what’s came to be known as public health.” The author discusses how, in 1854, she was serving as a nurse for British forces in Constantinople, Turkey, during the Crimean War and developed what became known as Environmental Theory of Nursing. It was based on five environmental factors that influenced public health: fresh air, pure water, efficient drainage, cleanliness or sanitation, and light/direct sunlight. For her, they provided ingredients that put the patient in the best possible condition to improve and become healthy in a nurturing environment.

Hamblin also reviews the role John Snow, a London physician, played in 1984 linking contaminated drinking water to infectious diseases like cholera. In 1883, Robert Koch confirmed Snow’s findings and introduced “germ theory” and promoted the need for clean water. As the author observes, “ideas about personal hygiene also rocketed to the center of consciousness. A person’s cleanliness could be taken as a marker of who was or was not dangerous.”

(The author wrote the book before the current Covid-19 pandemic.)

Hamblin points out how, since the late 19th century in the U.S., cleanliness became increasingly defined as a mark of social privilege. He argues that store-bought soap from, for example, Lever brothers, William Procter and James Gamble was a long a luxury product and that early manufacturers, in addition to promoting soaps with privilege, promoted racial stereotypes to sell their products.

One technique used by early cleanliness companies to promote their soap products was through health advice books or what is known today as “sponsored content.” An example of this approach includes Lever’s Sunlight Year Book, Procter and Gamble’s “How to Bring Up a Baby” for Ivory Baby, and Palmolive’s “Keep That Schoolgirl Complexion.”

He finds that today’s soap—or cleanliness—companies rely on well-tested marketing techniques to maximize their business. For example, he shows that an individual company will promote apparently competing brands offering comparable products to suggest consumer choice.

The author draws upon his own medical knowledge as well the expertise of a host of specialists and others who bring insight into the workings of the skin and the role of cleaning agents. These, including dermatologists, microbiologists, allergists, immunologists, aestheticians, bar-soap enthusiasts, venture capitalists, Amish people, theologians, and straight-up scam artists. According to Hamblin they have one thing in common: “trying to figure out what it really means to be clean.”

The first specialist Hamblin visits with is Alicia Yoon who runs Peach & Lily, a sophisticated Manhattan skin-care company that specializes in a variety of “K-beauty”— “K” for Korean—products. She massages his face with a specialty concoction that, she claims, combines traditional enhancement with specialty nutrients. Upon leaving her facility, he feels rejuvenated.

Hamblin also meets Julie Segre of the National Institutes of Health who, along with her colleague, Elizabeth Grice, were the first to map the bacterial and fungal diversity of human skin. She discusses the current popular fascination with probiotics in food and how doesn’t seem to have affected people’s thinking about skin care: “Everyone wants to eat Activia yogurt and colonize themselves with bacteria, and then they want to use Purell.”

Still another expert he visits is Sandy Skotnicki, a Canadian dermatologist, who studies men who suffer from severe eczema. She gets them to stop over-washing and over-using shower gel to correct their condition.

Jack Gilbert, who oversees the University of Chicago’s five microbiology labs, greets Hamblin with an exuberant hello: “So, I shower.” Admitting, “I do shower, though I know the implications of it. Not every day, and I don’t tend to use a lot of soap when I do.”

Most fascinating of Hamblin’s travels is to Dr. Bronner’s Magic Soaps factory and his meeting with David Bronner, the original Dr. Bronner’s grandson and current company’s CEO. Dr. Bronner’s soap—“18 in 1”—was concocted in 1948 by Emmanuel Bronner. The name expresses his philosophy: “We are All-One or None!” Bronner founded the company to fund his mission to spread the message of peace and unity. It’s sold for years in most alternative health food stores and now is available everywhere.

The most surprising person to appear in this engaging book is Frederick Law Olmsted who, along with Calvert Vaux, designed two New York landmarks: Central Park and Prospect Park. Hamblin, who lives in Park Slope, is regular visitor to Prospect Park and charmed by its beauty.

In 1861, following the Union Army’s defeat at the First Battle of Bull Run, in Manassas, VA, Olmstead was asked to serve as general secretary and chief executive officer of the new the United States Sanitary Commission. It was established to improve the sanitation of the Union Army’s military camps and the health of Union soldiers. Olmstead served until mid-1863. In 1868, he and Vaux teamed up again to create Prospect Park.