This World We Live In (Life As We Knew It Series) 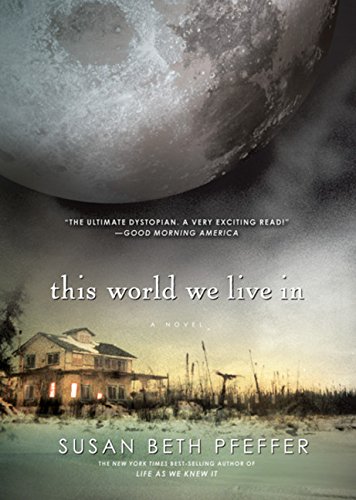 Imagine a world with no sunlight, where groceries stores, clean running water and electricity exist almost exclusively in your memories. Not being hungry on a constant basis or having light to see by is a luxury. Imagine you must try to survive with what you have in your home right at this moment. How long would you last? How would you cope when canned goods, bottled water, and a wood stove become the only means of survival?

Susan Beth Pfeffer has asked us to imagine this exact scenario in this third title in her Young Adult series, Last Survivors, about the end of civilization as we know it. In her first book, Life As We Knew It, the moon was suddenly knocked out of orbit by an asteroid, sending planet Earth into panic and disorder. Earthquakes, floods, and famine were widespread, and epidemics circulated rampantly over the following months, killing millions. The ash from widespread earthquakes even blocked most of the light from the sun, plunging the temperatures down even in summer and making growing food impossible. In short, life as we know it began to end.

In her third installment, This World We Live In, things are still dire, but there is still hope that one day the world might recover or that at least life might still be possible. Food deliveries have begun, and it seems as though things might look up in the future as communications with the outside world become somewhat available. There are survivors and the hope of a united future for those left.

As one of the only survivors left in her hometown, teenager Miranda Evans continues to struggle with her family in Howell, Pennsylvania. She spends her time fighting to manage everyday tasks and writing in her diary, attempting to retain some account of the craziness that abounds in the world around her. Having not seen her father, stepmother, or her newest sibling since the beginning of the end, Miranda is shocked when they show up on the doorstep with strangers in tow.

Readers of the series will remember Alex Morales and his sister, Julie, from the second book in the series: The Dead & The Gone, in which they struggled through the same events as Miranda in frantic New York City. Now living alongside Miranda’s family, a new group has formed and tensions are high as relationships grow and change. Will love blossom in this time of death and heartache? Will the food last with so many new mouths to feed? And most importantly, will the world ever return to any semblance of normal?

Fans of the series will delight in this latest installment of Pfeffer’s work. She has found a way to make the end of the world a little too plausible. What she describes not only could happen, but makes you think about things in your own life in an entirely new light. While this reviewer may feel the need to go hit up a warehouse club for massive cartons of canned goods after reading it, she must say that This World We Live In is worth reading and considering for future thought. And one bit of advice: Starting with the first title in the series makes this third title all the more enjoyable.