Bored, Lonely, Angry, Stupid: Changing Feelings about Technology, from the Telegraph to Twitter 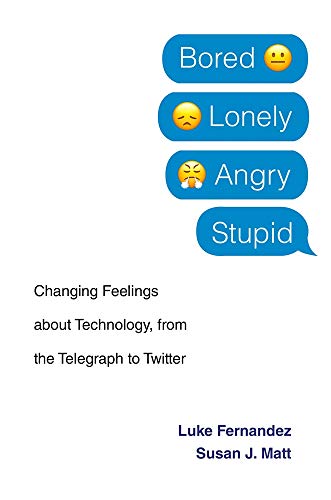 “aggregating thousands of small pieces of evidence scattered in diverse historical and modern sources to build an illuminating context in which we can begin to fathom our emotional states entangled with technologies.”

Luke Fernandez and Susan J. Matt, husband and wife, teaching computer science and history respectively at Weber State University in Utah, have combined their research and intuitions to argue that technology influences our emotional states, such as narcissism, boredom, loneliness, anger, and awe. The “stupid” part of the book is a bit muddled and seems more about the effect of technology on the “battle between concentrations and distractions.”

In addition to historical sources and literature review, the authors “interviewed, between 2014 and 2018, 55 Americans, sometimes speaking to them more than once.” With repeated referral to “Americans” throughout the chapters, the authors seem cautious not to overgeneralize the effect of technology on users elsewhere. Whether “55 Americans” authentically reflect the emotional states of more than 327 million residents of the United States is a statistical irritant.

The strength of each chapter, dedicated to a specific emotion listed in the book’s title, lies more in historical materials rather than interviews. The historical evidence provides fascinating accounts of the effect of earlier technologies, such as postal service and telegraph, on social behavior.

For example, the authors describe the “vanity” of writing letters made possible by an affordable national post system introduced in the 19th century. “Excessive self-regard” considered “sinful” and self-descriptions considered vain in face-to-face conversations underwent change and occupied a major part of the letters sent to relatives and spouses. In fact, family correspondence filled with personal details became routine. The technology of postal system transformed personal vanity into a social obligation.

The removal of restrictions on vanity and the acceptability of self-expression set in motion a cultural revolution. Modern technologies such as cell-phone selfies, chats, blogs, personal websites, Fitbit wears, and social media have flung open the ways to indulge in uninhibited narcissism. The distinction between “self-awareness and self-absorption” is fading away.

Like everything else, self-love comes with a price tag. Modern technologies furnish ways for unlimited self-promotion, but they also provide easy surveillance over what you say, like, visit, or buy. The sellers, the government, the employers, ex-spouses, and friends and foes, all are “watching you.” What you say on the Internet is indelible even if you delete it and may come to haunt you right away or in distant future. That’s scary.

Thus, the chapter on vanity does a superb job of retracing the psychological journey from sinful egotism to barefaced narcissism to an eerie fear of surveillance. Without the historical perspective, what modern technologies are doing to the culture and to individuals would have remained sheer speculation.

The historical examination of “Awe,” perhaps the most captivating chapter in the book, explains how the mainstream ethos has gradually replaced the awe of divine powers with the awe of human talents.

In the 19th century, the construction of telegraph was viewed as “a gift of God.” The cables laid under the oceans and the wires spreading across the land looked “awesome, wonderous, and mysterious.” Getting cablegram news from across the Atlantic in matters of minutes was a miracle bestowed on “great Christian nations.” However, some churchgoers viewed the new technology as interference in God’s affairs and feared heavenly retribution. Either way, the telegraph was correlated with divinity.

Gradually, as inventions multiplied, technology came to be regarded as a product of human intelligence. God was becoming increasingly inconsequential in matters of innovations. Telephone, television, cars, airplanes, Internet are no longer viewed as favors of God. They are human gadgets that modulate the raw forces of nature and make life comfortable. Even ordinary people are living more luxurious lives than did the royal families of prior centuries.

As human intelligence replaced divine awe, the psychologists declared that religious feelings related to technology are “useless vestiges of the past.” Max Weber postulated that all things can be mastered “by calculation.” For Nietzsche and his admirers, God was dead. This new faith in human potential secularized the “more highly civilized peoples at present times.” Yet not everyone is convinced that humans have replaced gods. The old beliefs endure, and the believers hope that the technology might endorse spirituality.

The chapter on boredom explains how the lore of solitude has turned into the dread of loneliness. Free time has been the privilege of the wealthy while the working class owned little time to relax. Technology has democratized leisureliness for all. The digital age provides continual stimulation to browse websites, make contacts all over the world, snapchat, tweet, scroll Facebook, listen to songs, and watch YouTube videos.

Now, free time breeds boredom. People do not know what to do if the Internet is unavailable. Restlessness and disorientation ensue in the absence of an Internet connection. Some “individuals would rather administer electrical shocks to themselves than sit bored and ‘alone with their thoughts.’”

The chapter on “stupidity” is actually named “Pay Attention.” The chapter meanders through many subthemes seemingly unrelated to the effects of technology. One subtheme digresses into recounting how African Americans and women were considered intellectually deficient. Another subtheme explores the dichotomy between intellect and labor and whether individuals are predisposed to one or the other. The old theories about mental powers derived from race and gender need no more reminders.

The chapter on “stupidity” is nonetheless important in understanding the broad cultural obsession with mental powers. Previously, the mind was believed to be a finite source that must not be overburdened. Then came the myth that humans use only 10 percent of their brain power. The jury is still out about human intelligence, its sources, and its limits.

There is a new belief that “our brains are infinite in their power and potential.” Technophilia fills the air in schools and colleges. Many devices are distractive and interfere with learning. Students hooked on to cell phones are losing attention span even when compared with the fish.

The epidemic of attention deficit disorder (ADD) has been blamed on a fast-paced life full of distractions. The book points out how the pharmaceutical industry has made billions in selling Ritalin, Adderall, and other psychostimulant prescriptions. Many college students use these drugs without a prescription to improve their ability to concentrate.

While some use drugs to expand mental capacity, others use “programs like Lumosity, Cogmed, Brain Games, Brainiversity, NeuroNaiton, Mind Quiz, and many others” to improve memory, focus, intelligence, and neural plasticity. The book contends that most Americans believe that drugs, games, iPhones, and other technologies can grow their mental powers.

In exploring various emotional states in historical-developmental context, the book offers rich details. The book interweaves a popular style of writing braced with academic research. It reads like a work of fiction with myriad characters, in addition to 55 Americans, adding conflict and resolution to emotional states. In the end, the characters fade away leaving behind a feeling that technologies are taking away our solitude, divinity, awe, privacy, and focus. And yet the cell phones and Wi-Fi seem immortal.

The book is a valuable addition to the study of social behavior influenced by technologies. The authors have worked hard in aggregating thousands of small pieces of evidence scattered in diverse historical and modern sources to build an illuminating context in which we can begin to fathom our emotional states entangled with technologies.