Influenza: The Hundred Year Hunt to Cure the Deadliest Disease in History 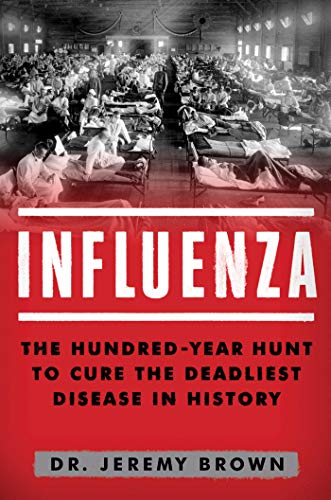 “Influenza: The Hundred Year Hunt to Cure the Deadliest Disease in History is a highly engaging read. Yet it is also an essential clarion call for more action on the danger posed by the flu.”

The influenza pandemic of 1918 killed 50 to 100 million people worldwide, including more Americans than died in combat during World War I. Unlike the seasonal flu, which still costs the lives of up to 50,000 each year in the United States, the so-called “Spanish flu” produced an excessive immune response in patients known as a “cytokine storm” and proved disproportionately fatal among healthy adults in their twenties.

The “malady of all empires” ravaged nearly every corner of the globe, slaughtering rich and poor, carrying off Donald Trump’s grandfather and Grover Cleveland’s sister and 72 out of 80 residents of the Alaska village of Brevig Mission. At the time, physicians and scientists were largely powerless in the face of “one of man-kind’s most dangerous foes.”

Brown, who runs the Office of Emergency Care Research at the National Institutes of Health, is clearly a man who knows his flu. Not just the physiology of the virus or the epidemiology of the illness, but countless fascinating and even fun facts about the scourge.

For instance, he reports that the incidence of flu rises significantly in cities whose hometown teams appear in the Super Bowl (likely due to the increased social interactions related to the event), but not in host cities. Brown also displays a gift for distilling complex biological concepts with lucidity.

Even readers familiar with the history of the flu may find themselves engrossed by Brown’s extensive research and compelling anecdotes. A good portion of the historical narrative is devoted to the 1918 pandemic’s origins—which may have been in rural Kansas or at a British military camp in France or even in northern China, where an illness “resembling influenza” might have been circulating for several years. Certainly not Spain. In fact, the reason the pandemic was first reported widely in Valencia was probably because World War I censors in combatant nations downplayed or stifled reports to protect morale. Neutral Spain did not face such pressures.

Brown exposes the various ways in which social forces rendered the pandemic worse—such as Philadelphia’s decision to sponsor a war-bond parade at the outset of the epidemic that “was essentially a marching band of influenza.” The pageant vastly increased human-to-human contacts, including those between military recruits and civilians; two days later, more than 100 flu victims were dying daily in the city. Of course, the treatments available often proved just as deadly: exposure to poisonous gasses, mercury, lethal doses of aspirin, and quinine.

Among the most surprising revelations regarding the 1918 pandemic were its long-term effects. Columbia University economist Doug Almond discovered that babies born in 1919 (who were exposed to flu in utero) displayed “higher rates of physical disability, achieved a lower level of education, and earned lower incomes as adults” than individuals born in 1918 or 1920.

The quest to understand and cure influenza is also a compelling story. Among its heroes are an unsung Japanese professor, T. Yamanouchi, and a group of 52 medical professionals who volunteered at the height of the epidemic to have either bacteria-filtered or unfiltered sputa from flu patients placed in their noses or mouths—in order to determine whether the cause of the illness was bacterial or viral. It proved the latter, although in the pre-antibiotic era, many victims perished from secondary pneumonias and other bacterial infections. (Brown does not tell us how many of the 52 volunteers survived.)

Another riveting portion of the narrative relates the effort to locate and sequence the genetic material of the Spanish flu. Pathologist Johan Hultin travels to the permafrost of Alaska to find samples in the lungs of frozen victims, gaining the trust of the few living survivors in Brevig Mission. He found no viable flu on his first expedition in 1951. Undeterred, he tries again 46 years later.

Brown does an excellent job of dispelling myths about influenza. He provides evidence from the scientific literature when available, but then interprets and synthesizes it for the befit of lay readers. Can Google algorithms predict flu outbreaks in advance? (Apparently not, despite much of the publicity surrounding Google Flu Trends.) Is there a benefit in taking the antiviral medication, Tamiflu? (Possibly shortening of symptoms by 24 hours, but at the cost of side effects.) Does it make sense for the government to stockpile millions of doses of Tamiflu? (Only if one owns pharmaceutical stock, because “the push toward stockpiling Tamiflu began in earnest on the basis of species and probably biased recommendations.”) To his credit, Brown readily admits when the results are inconclusive and is not afraid to acknowledge what science does not yet know.

Influenza tackles many of the ethical issues relating to infectious disease research with nuance and balance. Brown investigates the controversy surrounding the development of gain-of-function variants of the flu virus that some fear could be weaponized or accidentally released. He tackles the issue of whether details about how the 1918 virus developed should be published—as they ultimately were in Science.

One of the most controversial aspects of Brown’s volume is his questioning of the benefits of healthy adults receiving annual flu vaccinations. He notes that the vaccine appears to reduce the number of people experiencing illness from 2.5% of those not vaccinated to 1.1% of those vaccinated; in other words, 71 individuals must be vaccinated to prevent one case. A modest benefit, at best. Brown does not address the possibility that receiving vaccinations regularly might create some additional immunity in case of a pandemic. (Full disclosure: This reviewer will still be obtaining his annual flu shot.)

The details Brown amasses range from the revealing to the absurd. Among the former, he notes that an increase in electrical fires at Egyptian poultry farms may reveal a bird flu outbreak—as farmers probably engage in preemptive insurance fraud since they cannot be compensated for birds killed on account of flu.

As for the absurd, what better than the tidbit that some government entities classify unused flu vaccines as “medical waste,” meaning that vaccines originally sent to providers via FedEx “might need to be picked up by a team in white protective suits. . . .” For a book on a deadly serious subject, Brown is not afraid to introduce some wry wit. Writing of a recent epidemic of Middle East respiratory syndrome, he quips: “Here’s some free medical advice; before taking a swig, make sure your camel milk has been pasteurized.”

Influenza: The Hundred Year Hunt to Cure the Deadliest Disease in History is a highly engaging read. Yet it is also an essential clarion call for more action on the danger posed by the flu. Brown writes: “We don’t know when or where the next viral pandemic will occur, but it will occur.” That’s not a threat to sneeze at.