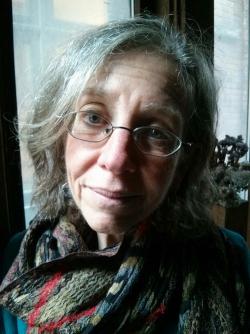 While on the editorial collective of Canadian Dimension Magazine, she co-edited issues on militarism and on children. In 2009 shortly before the Copenhagen COP climate meeting, as president of Science for Peace she brought together foremost climate scientist James Hansen, Naomi Klein, and indigenous environmental campaigner Clayton Thomas-Muller.

She has organized many talks in the Toronto area, recently focusing on the militarization of climate change, environmental racism, and the threat of nuclear war. Her work appears in Counterpunch, Canadian Dimension Magazine, and the Science for Peace Bulletin. Her article “The Exploitation of Children” was one of the keynote papers presented at the 2008 Gaza Community Health Programme/WHO symposium “Building Bridges” and is published in Psychoanalysis, Collective Traumas and Memory Places, ed. Giuseppe Leo (2015, Frenis Zero).

She is a mother and a grandmother.

Empire of Borders: How the US Is Exporting Its Border Around the World

“Empire of Borders provides fundamental, essential information about the current human situation at the borders.”

Considering Class: Theory, Culture and the Media in the 21st Century (Studies in Critical Social Sciences)

The anthology Considering Class: Theory, Culture and the Media in the 21st Century, provides invaluable perspectives on the working class at this critical historical time.

A World to Win: The Life and Works of Karl Marx

Sven-Eric Liedman’s A World to Win: The Life and Works of Karl Marx, is a remarkable and timely contribution and achievement.

Gaza: An Inquest into Its Martyrdom

Gaza: An Inquest into its Martyrdom is an extraordinary book. It is also a difficult book to read.