Empire of Borders: How the US Is Exporting Its Border Around the World 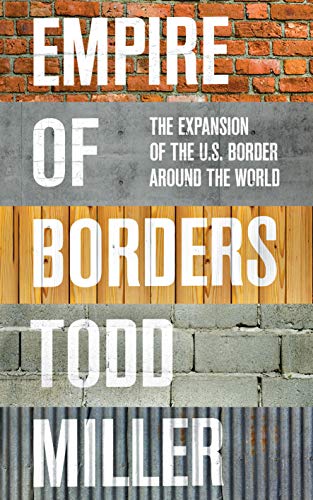 “Empire of Borders provides fundamental, essential information about the current human situation at the borders.”

Todd Miller’s Empire of Borders: How the US Is Exporting Its Border Around the World is profoundly helpful in this time of human and ecological disaster. Miller is a journalist with a novelist’s attention and sensitivity to individual human experience. His investigations involve interviews and descriptions of the wide range of people who are part of the border security complex, the military adjuncts and arms manufacturers, and certainly with the refugees and people whose lives are tragically impacted by borders.

Miller’s work is well-researched in the historical roots of borders and in the current modes of political and military expansion, changes in nation states, and the emergence of a powerful global elite. He refers to a wide range of literature from pertinent disciplines and helpfully introduces the reader to other current work, including Israeli anthropologist Jeff Halper’s research on surveillance/security technology, Reece Jones on violent borders, Joseph H. Carens’ legal contribution to open borders, Arundhati Roy, Juan Gonzalez among others.

Miller describes in detail much that should be widely known by the public:   militarized borders, climate impacts necessitating migration, and a political/economic system that robs the majority population of its livelihood through land confiscations and various market mechanisms.

He documents “extreme vetting,” how borders are increasingly “virtual” as algorithms classify and identify people according to race, class, political affiliations, allowing a “selection” of acceptable “castes” to cross borders.  Selection occurs far from actual borders as technology enables a global panopticon over people. While elites, goods, and money are allowed free flow, whole classes of people are confined, often in unliveable conditions. The train carrying people across the Guatemala border is called La Bestia, the Beast, the train of the disappeared.

Empire of Borders begins at a military base at the Guatemala/Honduras border and in Iraq where the US Border Patrol special forces and tactical unit conduct training and operations. He quotes from the U.S. 9/11 Commission Report: “the American homeland is the planet” and from Department of Homeland Security and Southern Command General John Kelly: “I believe the defense of the Southwest border starts 2,500 miles in the south, with Peru.”

In 2014 the UN Security Council passed Resolution 2178 calling on member states to put border security systems in place for counterterrorism purposes. But Miller and Halper document a “securocratic” war against people to manage antagonisms between the haves and have nots, with linked border enforcement stemming from centers of financial and political power. He reports that everyone he spoke with throughout southern Mexico were convinced that the U.S. was behind all the militarized police operations.

Empire of Borders details applications of border security on every continent, the long history of child separations, the profiting corporations, the pivot to Africa, and the contrasting frame of Demilitarizing the Borders and “The Right to the World”: the right to free mobility, including leaving and re-entering ones’ country.

The author describes the deplorable conditions of many refugee camps, deprived of latrines, potable water, and health care. In contrast, he details how people have always been able to establish communities of cooperation and collaboration based on managing the commons to provide basic necessities. Miller also has a keen sense of irony, describing the sterile, hostile, and dystopic venues of the global elite.

Empire of Borders provides fundamental, essential information about the current human situation at the borders.