Considering Class: Theory, Culture and the Media in the 21st Century (Studies in Critical Social Sciences) 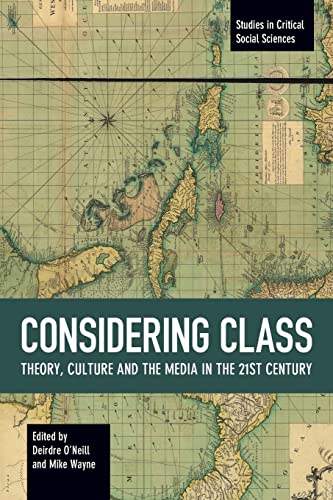 The anthology Considering Class: Theory, Culture and the Media in the 21st Century, provides invaluable perspectives on the working class at this critical historical time. The contributors include a range of academics, workers, media critics, and political activists. The articles are well-researched with extensive bibliographies.

Overall, the authors explore the inattention to class conflict in politics and in academia, and they take the position that the working class and class conflict are critical to understanding the present deteriorating world situation and how to change it. The focus is not on working conditions per se but on class consciousness as the necessary precondition of political action. Particularly helpful is the comprehensive integration of concepts, data, and poignant descriptions of what has changed for working people and their communities under the neoliberal phase of capitalism. The studies cover conditions in the U.S., Europe, Australia, South Africa, and Argentina, with analyses of Marx and Engels, E. P. Thompson, and Gramsci.

In their introduction, the editors eloquently present the conundrum of the disappeared explanatory concept of class conflict and basis for political action in a  “world of evident unreason, the world which a class analysis tries to make sense of: food banks in some of the richest countries in the world, whole economies at the mercy of unaccountable financial forces, corporations engaging in environmental despoliation, resource wars and migration, developers driving the poor out of city centres to get their hands on property assets, public services privatised, public revenues poured into private pockets, the working classes abandoned, the middle classes beginning to join them. . . .”

There are a number of insights in these articles about the differences between class and other identities. The contributors point out that the mode and extent of exploitation is typically less visible than the oppression of other identities that are often decoupled from class. The extent of expropriation and exploitation of laborers is obscured by the mathematical calculations of surplus value and labor time.

There is the critical distinction between oppression and exploitation: workers are exploited through their labor, which provides surplus value, and therefore they have potential power, while the oppressed do not have any particular power. In comparing class conflict and identity politics, a point was made that redressing injustices to racialized, gendered, ethnic communities, while critical and necessary, will not in itself change the capitalist system.

A number of the book’s articles point out the many ways of structurally, ideologically, and psychologically neutering class consciousness and collective action. In Britain, Thatcher and then Blair’s New Labour blamed workers for their not reaping the rewards of neoliberalism. In the media, working class people are represented as stupid, dissolute, and violent. The ideology of Individualism, there is no such thing as “society,” and There is No Alternative, the assault on unions and all collective action, strip away knowledge of history and of morality.

The article on the series Breaking Bad, Obama’s favorite television program,  describes an idealized entrepreneurial sociopathy and personal entitlement to exploit people who are suffering. One of the cases presented in this book is about an exceptional woman who provided a great deal for her community through volunteer work but who suffered immense psychological, physical, and financial damage when she was required to work for “real” money. Structural assaults on working class communities include the global gentrification of urban spaces combined with the breakdown in traditional work due to factors such as outsourcing, automation, prioritizing short-term profits, and by precarity and temporary employment.

Many of the articles provide helpful insights about consciousness and representation. Long-lived, close-knit worker communities are now dispersed, losing connections with each other and with the cohesion of their past. An interesting point is made about how the distancing and segregation of workers from wealthier classes increases ignorance of poverty for the rich, and ignorance by the poor of what they have provided for the rich. The classifications of work are themselves distortions and demeaning. Jobs classified as unskilled or semi-skilled require a great deal of skill and good judgment. For example, “dinner lady” makes lunch for 200 children and receives expected demeaning payment.

The book includes some data on the international picture. The underpaid workers in African and Asian countries is notorious. Worldwide employment conditions have worsened in terms of insecurity, wages, and working conditions, the actual amount of goods and services that are affordable, and in the amount of surplus value extracted. Vast numbers of peasant farmers, impoverished by the global agro-industrial complex, move to urban slums. Prison labor and enslaved workers are essentially free labor. The authors point out that proletariat laborers, unlike serfs and slaves, work under contract and their subsistence depends wholly on the sale of their labor power. Working class consciousness and politicization come from organizing in the process of struggle. Neoliberalism presents the public with a confusing representation of society in which it is difficult to identify the extent and mechanisms of exploitation.

The articles in this book extensively and accurately report the extent of exploitation and deception. They convincingly show the unliveable, worsening situation of the majority world and the urgency of consciousness, organization, and opposition. This intrinsic day-to-day precariousness is especially alarming and life-threatening in face of the extrinsic dangers of militarization (in wars, at borders, in policing) and the climate emergency.