The Withdrawal: Iraq, Libya, Afghanistan, and the Fragility of U.S. Power 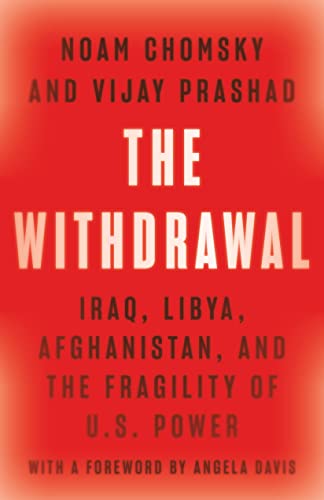 “distills crucially important information and analysis about the many U.S. wars after WWII. It is a critical responsibility to know the real history.”

The Withdrawal: Iraq, Libya, Afghanistan, and the Fragility of U.S. Power by Noam Chomsky and by Vijay Prashad, is extraordinarily timely, given threats of nuclear war and the  characteristic intransigent US position on military might, not negotiations. The book is a condensed distilling of these authors’ decades-long documentation and analysis of the political and economic causes of massive loss of life driven primarily by U.S. military intervention in the post-World War II period.

Chomsky and Prashad detail the exact words of decision-makers, and the irresponsible major media and colluding intellectual and government figures in the context of flagrant brutality and illegality. Their overall overview is contrasting two systems of law: the U.S. “rules-based-order” that represents a dominion of military power, and the UN ideal system set out in the UN Charter to end “the scourge of war” through negotiation and compromise, through arms control/arms elimination treaties, and through international humanitarian and just-war norms.  Chomsky characterizes the U.S. “rules-based-order” as embodied in Godfather behavior. Chomsky is 96 years old, has seen the world situation become increasingly precarious and fragile, and is speaking out publicly and publishing urgent warnings about the future of life.

Chomsky shows that the Godfather attitude is endemic to the United States, a modus operandi that is reducible to killing superfluous populations: the genocide of North American indigenous people and conquering by the gun people of Hawaii, Guam, Puerto Rico, the Philippines.

The 1823 Monroe Doctrine claimed the Western Hemisphere as a U.S. sphere of influence. Chomsky quotes a U.S. helicopter team’s slogan “Death Is Our Business and Business Is Good.” The practice has always been to kill, to brandish military might, and avoid negotiation: in Vietnam, Afghanistan, Iraq, Libya, and now in the Ukraine/Russia war. Not one war resulted in a pro-U.S. government. The wars led to needless suffering for civilians, millions of disrupted lives, millions of people killed. The Godfather can kill anyone at any time. After formal withdrawal from Afghanistan, a U.S. drone struck a car carrying food aid and killed ten people, including seven children.

The Godfather protects the property privileges and power of the ruling elite in the U.S., Europe, Japan, and a few other countries, and sanctions violence through its authorized agents including dictators, police, paramilitaries. The U.S. does not tolerate any challenge by other countries, even small Grenada and Cuba. Chomsky and Prashad see the Ukraine/Russia situation as rooted in the U.S.’ rejection of any other power in the global order. The emergence of the China/Russia threat is not driven by ideologically different systems but as pure competition for military and economic hegemony within an essentially market-driven capitalistic and militarized  global system.

The book is essential to read for the details about how the U.S. gets away with the “scourge of war.” For those familiar with Chomsky’s work, the conversation format between Chomsky and Prashad offers a personal perspective about how these two people, coming from the global north and global south, joined in conversation over many decades out of their compassionate concerns about people and passionate admiration for the people who live in intolerable conditions, many of whom Chomsky had visited as in Laos and Vietnam, Palestine, and the Kurds in Turkish slums. Prashad writes that Chomsky’s speech and article on “The Responsibility of Intellectuals” pierced the hypocrisies of the U.S. academics who play their part in American violence.

This short book is replete with detailed facts about many of the United States’ full-scale wars after WWII, both declared and undeclared, and its participation in proxy wars and covert support of clandestine dictatorial coup d’etats, pre-emptive wars, provocations. There are chapters on Vietnam and Laos, Libya, Iraq, Afghanistan, and the many operations in Latin America.

Laos has received even less attention than the “forgotten” Korean War, and it is a tribute to Chomsky that he had written about Laos and had visited its people during the bombings. There were 580,000 bombing missions, a full payload of bombs every eight minutes around the clock for nine years. In the U.S. total scorched earth wars, people lived in caves.

Chomsky and Prashad trace the historical trajectory of rationales and justifications for armed aggression that superseded the authority of the UN Security Council: the Cold War, Responsibility to Protect, the war on terror. The real motives are consistently the drive for hegemonic military and economic power, control of global fossil energy, and the supremacy of the U.S. entrepreneurial system. Chomsky and Prashad interpret the Russia/Ukraine war in the context of the threat posed by Russia allied with China, a Eurasian constellation, to the U.S. military-economic order.

Their description of the May 1968 Tet offensive in Vietnam is a historical example of people’s ability to surreptitiously organize while under the surveillance of informers, to fully understand their situation even without media and communications technology, and to succeed against a large, heavily armed military of 600,000 U.S. troops and 700,000 to 800,000 South Vietnam troops. “The most amazing uprising in human history” involved peasant troops attacking 36 of 44 provincial capitals, and more than 100 towns and cities, making it clear that the U.S. and Saigon could not prevail over communists in North and South Vietnam. This war caused yet another horrific loss of millions of lives after the U.S. rejected all  offers to negotiate.

Especially pertinent right now is the book’s information about the United States’ pride and confidence in military prowess and its arrogant opposition to negotiation. With 4.25% of the world population, the U.S. accounts for almost 40% of military expenditures. They attribute to the media and intellectuals the deceptions that persuade and manipulate the public into uncritically accepting the necessity of the military and economic regime.

George H. W. Bush refused to negotiate with Saddam Hussein prior to the 1991 war on Iraq; George W. Bush attacked Iraq in 2003 and Afghanistan in 2001 despite valid openings to negotiate and the Taliban offer to completely surrender and allow the arrest of Bin Laden.  Rumsfeld said, “We do not negotiate surrenders” and General Wesley Clark in a 2007 interview, when asked at a press conference “What do you know about bin Laden?” answered “We don’t really care. We’re not much interested.” The Godfather attitude is to show muscle to intimidate everyone. “People don’t matter, nothing matters. We have the guns, and we will take control and run it.”

There is an astonishing unashamed immorality, a reversal of culpability and heartlessness about victims: to claims for reparation from Vietnam, Laos and Cambodia, former President Carter said, “We owe them no debt. The destruction was mutual.” Reagan said, “They owe us reparations . . . it was a noble cause.” G. H. W. Bush said, “We’re willing to forgive the Vietnamese their crimes against us, because we are a forgiving nation . . . we’ll forgive them if they find bones of U.S. pilots show down by evil North Vietnamese.”

Chomsky and Prashad write that this callousness penetrated deep in American culture: Ralph Waldo Emerson and Walt Whitman believed that the United States was doing wonderful things for the world. They remind us that when Iran was ruled by the Shah after the U.S. and Britain staged a coup against the democratically elected president Mohammad Mosaddegh, the U.S. brought Iranian physicists to the U.S. to learn nuclear technology, and that the U.S. supplied Iraq’s Saddam Hussein with weapons for his wars on Iran and on the Kurds; Reagan intervened to block a congressional statement condemning the 1988 Halabja chemical weapon massacre of Kurds.

They observe that no one in high place said that the 1991 or 2003 invasion of Iraq was a crime, that Obama said it was a “strategic blunder.” They cite the resignations of Denis Halliday and Hans von Sponeck in protest against the egregiously destructive Iraq sanctions UN-administered oil-for-food program, which led to the death of ½ million Iraqi children [Jutta Purghart, head of the World Food Program, also resigned]. The same double-standard, avoidance of negotiations and ceasefire and the exclusive reliance on military might, is documented in the current Russia/Ukraine war and is causing severe threats to life due to interruptions in food and energy supplies and the threat of nuclear war.

Secondly, the United States’ hypocrisy about the “rule of law” means there are no restraints against using nuclear weapons. Since the end of the Cold War, the U.S. has withdrawn the nuclear weapons regulatory treaties and has reintroduced the use of a nuclear weapons first strike as a military strategy. Chomsky is increasingly warning that this is the most dangerous government in human history, risking mass death and in his words, “the end of organized civilization.” The authors expose the cynicism and public ignorance about “nuclear free zones,” pointing out that the U.S. puts nuclear weapons on foreign military bases and that its submarines, armed with as many as 144 nuclear warheads, roam the oceans with ready-to-launch missiles.

There are nuclear-weapon-free zone treaties covering major regions but they cannot protect people from the fallout effects of a limited nuclear war: the Tlatelolco, Rarotonga, Bangkok, and Pelindaba treaties. The Arab countries have asked for a nuclear-free weapons treaty for 25 years, but such a treaty would not include Israel, the only Middle East country with nuclear weapons. The U.S. protects Israel’s nuclear arsenal and right to have nuclear weapons. As a non-signatory to the Non Proliferation Treaty (NPT), Israel is not subject to any inspections by the International Atomic Energy Agency (IAEA) while NPT-signatory Iran is rigorously inspected and sanctioned.

Again, this book distills crucially important information and analysis about the many U.S. wars after WWII. It is a critical responsibility to know the real history. Both Prashad and Chomsky, along with many others, are warning about the unprecedented dangers facing humanity. There is an immense failure by people in positions of responsibility, in academia, and in the media to take seriously these extreme dangers. There are others who have long investigated and informed the public about the causes and effects of all these dangers, like the daily news program Democracy Now led by Amy Goodman; investigative journalists like John Pilger and Seymour Hersh; intellectuals like Dan Ellsberg, Theodore Postol, and Robert Jacobs (on nuclear weapons); Andreas Malm and James Hansen (climate).

The newly formed New Books Network shows that there is an immense contribution of solid academic research that is freely accessible to the public. And people all over the world know what’s real and are reacting responsibly. What Chomsky, Prashad, and all these other people are explaining is essential to carrying out the UN pledges to end war, to free people from want and fear.