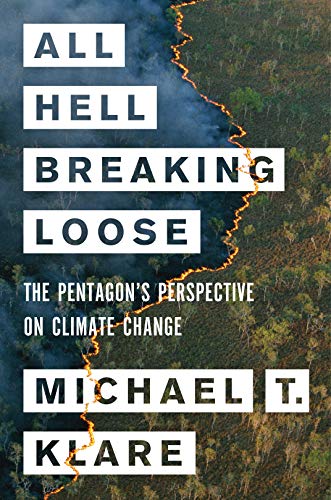 Michael Klare’s newest book departs from many of his previous works on America’s oil wars and disastrous, often provocative militaristic policies. All Hell Breaking Loose: The Pentagon’s Perspective on Climate Change is unexpectedly a paean to the American military establishment.  Klare quotes policy statements dating from over a decade ago, from all branches of the U.S. military, showing that the military has long acknowledged the full extent of the climate emergency. Interestingly, Klare distinguishes the military from the science and environmentalism focus on the physical world and on non-human species, whereas the military concentrates on the human world of food and water scarcity, pandemics, migration, violence, and society’s infrastructure.

His central thesis is that the military stands apart from U.S. administrations that deny climate change, and that in fact the military has long acknowledged the full extent of both the environmental and human impacts. He cites official military reviews and policy and planning documents that consistently support climate science despite climate-denying or -minimizing governmental positions.

Central to Klare’s thesis is that the most dangerous threats to the U.S. are China, Russia, and the Islamic state, but that climate change profoundly exacerbates geopolitical instability. The U.S. and its friends and allies are pitted against the impoverished, poorly governed states of post-colonialism. Klare frames the U.S. military as the ultimate, possibly only stabilizing force capable at this time of maintaining world order. He projects a military led by professionals committed to preventing chaos and calamity. He writes that the U.S. military is not motivated by an “altruism thing” but by a sacred obligation to ensure national security. Military officers are not afraid for their own safety but are first of all loyal to the unfailing integrity of the military mission to defeat America’s adversaries.

There is an epic, cinematic depiction of heroic forces who would cross borders, rappel from helicopters, and parachute from airplanes to secure known or suspected nuclear storage sites.  He describes massive humanitarian aid and disaster relief (HA/DR) operations  as in the response to the Ebola outbreak,  to fighting forest fires or  delivering medicine and food to disaster victims. He shows that the military uniquely has the equipment, the rapid response capability, and the trained manpower that are urgently needed to deal with multiple and complex catastrophes. The U.S. military demonstrates Washington’s compassion for victims and represents American military prowess.

Climate-related policy statements include Obama’s Executive Order 13653, the Quadrennial Defense Review, the 2007 National Security and the Threat of Climate Change, DoD report 2013 Strategy for Homeland Defense and Defense Support of Civil Authorities, and the 2018 Climate-Related Risk to DoD Infrastructure: Initial Vulnerability Assessment Survey. Indeed, each branch issues its own report about addressing climate change. In the context of looking at the dire effects of hurricanes in the United States, Klare writes that the safety of critical infrastructure is a civilian and private-sector responsibility in the United States, but the hurricane damage to infrastructure may indicate that the military alone is capable of preserving essential services.

Klare describes the domestic climate impacts on U.S. military bases and on global missions.   Given state-of-the-art technology and strategizing, the military can still be defeated in the face of sandstorms and other severe climate impacts. Klare writes admiringly of Innovations like knee harvesters, which collect kinetic energy from each stride and provide instant power generation.

The military projects Hobbesian assumptions about other people. The expectation is that responses to disaster and deprivation will be chaos and breakdown and that the military might need to use force, to deploy combat units to provide security. Klare writes that disintegrating governments and resource scarcity will provoke desperate migration and bouts of violence, ethnic discord, and terrorism, and that aid workers will need protection. He outlines the threats to all the major river systems.

Klare’s work does not address challenges to this representation of the military, namely from the socioeconomic, political, and historical perspectives about the environmental and human crisis.    Climate impacts are complicated by political decisions, such as the construction of large hydro-dams on all major river systems that are often funded by the World Bank and contracted to the Bechtel Corporation.

Klare writes favorably about the agribusiness complex and unfavorably about the armed resistance of traditional farmers. He attributes the rise in food prices to Putin’s stopping grain exports during Russia’s deadly 2010 drought, and leaves out speculation on grain in the futures market and the huge spike in prices due to biofuels.

He writes favorably about the 19th century precedent of the U.S. military protecting settlers during the Great Plains Indian Wars. Nor does he consider the overwhelming disasters brought on by U.S. military interventions and political interference in the Middle East. The high number of U.S. soldier suicides needs to be acknowledged and understood. Forest fires, hurricanes, drought and flooding, and other natural disasters worldwide generally do not provoke violence or tooth-and-claw competition for minimal resources. There is a long history of water disputes characteristically and predominantly settled through negotiation, and there are innumerable current instances of disaster altruism—of communities self-organizing in the face of natural disasters coupled with government malfeasance and neglect.

While it is promising that people in positions of power in the U.S. acknowledge the reality of climate change, Klare describes and even adulates the military role but does not challenge it in any way.