A Secret Life: The Lies and Scandals of President Grover Cleveland 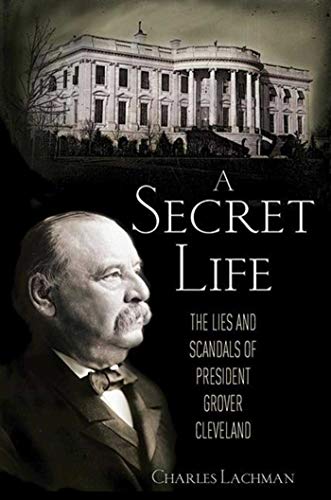 “A Secret Life is a masterfully researched biography.”

A Secret Life tells the story of how Grover Cleveland reached the presidency in such a brief period of time and how the wind was at his back the entire way to the top. Not to mention how he nearly tripped getting there.

A Secret Life: The Lies and Scandals of President Grover Cleveland is a well-written biography of the United States’ 22nd and 24th president; however, for biographies, good writing is not enough. It takes solid research.

A Secret Life is a masterfully researched biography.

The story is told grippingly by Charles Lachman (Executive Producer of “Inside Edition”) who is the author of two other nonfiction books, one of which is about the Lincoln family after the assassination: The Last Lincolns: The Rise and Fall of a Great American Family.

Grover Cleveland was elected sheriff of Erie County, New York, and served for two years from 1871–1873. He was drafted by a group of Democrats and was reluctant to run. He was concerned about the money and whether he could support himself on a sheriff’s salary. After his term as sheriff, he opened a law firm with some friends and built a stellar reputation as a lawyer. He left politics because of his desire to make money and was able to parlay the reputation he gained as sheriff into a solid legal business. He was also a talented litigator.

For ten years, Cleveland practiced law and then, again reluctantly, ran for and was elected the mayor of Buffalo, NY. Cleveland served for less than a year as mayor. During his time as mayor of Buffalo, he established a reputation as a corruption fighter. He caught the attention of the New York Democrats who were seeking a candidate for governor. Incredibly, he only served two years as governor before making his next move.

In 1884, he ran for President of the United States—and won.

A Secret Life is a great addition and an advance in the study of the presidency of Grover Cleveland. A Secret Life delves a little deeper into what was previously known about Cleveland, who is typically ranked by historians in the middle of the pack in presidential ratings—many of whom agree it is because of the split term. In recent years, Cleveland’s rating as president has risen and this book should help boost that.

The most compelling part of the book is the paradox of Grover Cleveland himself. He was a Democrat who was elected president twice during the great Republican era (which started with Lincoln) that lasted from 1860 to 1912. Grover Cleveland was a champion of “conservatives” back then, despite being a Democrat. He fought pro-business, opposed high tariffs and political corruption, supported the gold standard—among many other issues we today assign to the modern Republican Party. Ironically, these were the issues that defeated him in 1888 and, again paradoxically, the issues that won it for him in 1892.

Another interesting factoid is that Grover Cleveland won the popular vote all three times, but was only elected twice, losing in 1888 to one-term President Benjamin Harrison. He then defeated Harrison in 1892.

It is well known that Grover Cleveland was the father of a child borne by Maria Crofts Halpin in 1874. The book alleges that Cleveland raped Ms. Halpin and she became pregnant. Word would eventually leak to the press and his political opponents would use the slogan against him, “Ma, Ma, where’s my Pa?” in reference to the scandal which was much made of by the political cartoonists of the day. Cleveland went to great lengths to stifle the rumors and prevent Maria Crofts Halpin from talking—including forcing her into an insane asylum.

Grover Cleveland made his reputation when he was elected mayor of Buffalo and took office on New Year’s Day 1883. He hit the ground running and shocked the political establishment by having an informal swearing-in ceremony, rejecting a formal, expensive inauguration. The next day Mayor Cleveland laid down the law. He took aim at what he saw as the “shameful neglect of duty,” starting in the office of the street commissioner. He instituted an order that going forward all city contracts would be awarded to the lowest bidder. He ordered all city offices open until 5:00 P.M.—previously closed at 4:00. Mayor Cleveland vetoed a bill to set up a department for the city mortician, a bid he saw as just another vehicle for political patronage and an unnecessary expense. It was his first veto but not his last.

The most dramatic action on Mayor Cleveland’s part was when a man named George Talbott was awarded by the City Council a five-year contract to clean all paved streets and alleys for $422,500. A rival bid of $313,000 was rejected. In addition, Talbott’s original bid had been $372,000 and it was raised; yet Talbott was still awarded the contract. The extra $50,000 would be a payoff to the city council as a thank-you gift.

It was this and Cleveland’s stand against such ploys that launched him politically. His maneuverings grabbed the attention of many Democratic leaders in the state of New York who heavily recruited him to run for governor later that year. He ran and won by an overwhelming margin. Cleveland was on a roll.

A Secret Life answers many questions: such as what became of Cleveland’s child, Oscar Folsom Cleveland—Maria Crofts Halpin did not raise the child; a prominent couple adopted and raised the child.

A Secret Life focuses more heavily on Grover Cleveland’s personal life, making it easy reading, yet is a worthwhile read for those addicted to presidential history. A vivid portrait of Grover Cleveland the man does emerge, but more about Cleveland’s politics and policies while in office would have been welcome. It will be up to another biographer to take the Grover Cleveland presidency to the next level: where the personal and political sides are both given equal import.