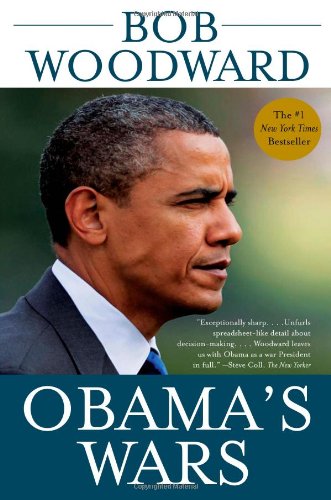 Obama’s Wars is the first real, living history of the Obama Administration as told by many White House insiders: including the President himself. Bob Woodward chronicled four books about the George W. Bush Administration, which served as guides to the evolution of Bush’s war policies starting with the attack on the United States on September 11th. Woodward also wrote a book about Bill Clinton’s first term as President.

What launched Woodward’s career and ultimately his credibility as a superb journalist in our times is All the President’s Men, the inside journal of Woodward and Bernstein’s coverage of the Watergate scandal. The book is still in print. Bob Woodward has authored or coauthored 15 bestsellers, of which 12 have been #1 national bestsellers.

Why is this important? Because of his credibility—and that is his number-one asset.

His style is to open the microphone, listen, ask a few questions, record the transcript, and allow the story to tell itself. Woodward has often been criticized for his style, the most hitting in a piece by Joan Didion who wrote, “He assembles reams of often irrelevant detail, fails to draw conclusions, and make judgments.” That is exactly the point: to allow the characters in his narrative to tell the story. This approach is often messy, at times illogical, and obfuscated by all the conflicting personalities—just like politics is in real life. Bob Woodward writes “Reality Books” that come to life. The book is a reality show of the Obama White House. Like his predecessor George W. Bush, President Barack Obama has opened the doors of the White House to Mr. Woodward. The reader can often draw many different conclusions.

Once again, Bob Woodward has succeeded in offering enough evidence for this reader to draw a number of conclusions.

Obama’s Wars tells the story of the Obama Administration’s struggle with Afghanistan. And it is the story of President Barack Obama’s personal battles, of how a young President is attempting to insert himself and gain respectability with the military brass. Most telling is the fact that President Obama clearly wants to withdraw from Afghanistan, but ultimately cannot. When asks repeatedly for options, the President is only given one.

At one point Woodward discusses a conversation with President Obama and General Colin Powell. The President has been frustrated by his constant request for guidance from the military and civilian leadership and receiving a number of options—essentially all leading in the same direction: “Stay put,” they advise. “At least for now.”

General Colin Powell told Obama, “You don’t have to put up with this.” He goes on, “You’re the commander in chief. These guys work for you.” Powell brings a steady hand to a young President; someone the President calls on from time to time for advice.

The first interesting event in Obama’s Wars occurs with the departure from the White House of National Security Advisor General James L. Jones. More telling is that Thomas Donilon, a Democratic Party stalwart, replaces General Jones. Donilon is an insider who repeatedly does the end run around General Jones. Woodward strongly argues that Donilon is the de facto national security advisor. Donilon has relationships with Rahm Emanuel, David Axelrod, and Robert Gibbs and was never considered one of the boys in the White House thus diluting Jones’ effectiveness as an advisor to President Obama. Jones confronts Emanuel on these end-runs, but has no effect on Emanuel’s behavior. Robert Gates tells confidants that Donilon would be a “disaster” as national security advisor.

Rahm Emanuel comes off badly in this account by Woodward. Jones calls Emanuel a “water bug” and says there are too many senior aides around the President.

“They’re like water bugs. They flit around. Rahm gets an idea at 10 a.m. and wants a briefing by 4 p.m. and I will say no because the work cannot be done in a day. The water bugs do not understand war or foreign relations, Jones felt, and all they cared about was the short-term political impact of the president’s decisions.”

Emanuel states that the war was “political flypaper:” Once you are stuck you cannot get unstuck. Emanuel fails to persuade the military and civilian people and President Obama of the best way to withdraw from this war. The politicos want out of the war to focus on the domestic agenda but fail to persuade President Obama.

As stated earlier, Woodward’s books do not necessarily have a viewpoint. They are very much open to interpretation. The book manages to paint a fair picture of the Obama White House and how it comes to make decisions. It shows a President who came into the process with an open mind. It is a strength of President Obama’s and a compliment to his character that he is willing to make choices that he believes are best for the country—even if those choices are unpopular.

This book focuses primarily on the decision to escalate the war in Afghanistan. It shows how the decision to escalate the troop levels another 30,000 came to pass. It comes through loud and clear about the President’s uneasiness with the decision to “surge” with 30,000 additional troops; he goes along because of this overriding fear of another terrorist attack. If we were attacked, Obama would most certainly be blamed for inaction or taking the wrong action. The military argued forcefully for some type of troop increase with various levels of deployment.

The book does depict a President who very much wants to do the right thing for the country and for the military. The story is an evolving one and this is a must-read for those concerned about the war and our military involvement overseas. The book also is a stark contrast to the Bush books written by Woodward. The Bush books reveal a preconceived notion that we “must” go to war, as opposed to a real and open discussion of all options of whether to continue the war. We also see the contrast involving the ease of getting into war, and the nearly impossible task of unwinding from a war. There is also a sense of self-consciousness regarding history when it comes to the President not wanting to make the war comparable to Vietnam. He tells his young speechwriter, Benjamin Rhodes, “One other thing. I want to say in the speech why this is not Vietnam, why this is not Iraq.” In other words, Obama was determined not to have this war equated with two words that mean failure: Vietnam and Iraq.

We get a great sense of Obama’s desire to create a reputable place for himself in history. A legacy. And wanting to be tied to winning situations. Obama is a student of American History who is aware that the failed Presidency of Lyndon Johnson was tied to Vietnam. The failed Presidency of George W. Bush will forever be tied to the disastrous decision to preemptively strike Iraq in search of WMD (Weapons of Mass Destruction).

President Obama has already unwound the involvement in Iraq, severing ties there. Now he wants to lay claim to success and victory in Afghanistan and tie it to the fight against terrorism.

President Obama, for example, encourages Vice President Biden to have an opposing viewpoint. The book shows calm and measured responses from the Vice President when it comes to discussion of these issues. This is in direct contrast to his reputation as somewhat of a hothead. Biden is serving the Obama Administration well—if you read between the lines. Many in the Administration come out well. Some do not. The military people complain about the political people.

A very good portrait of the Obama Administration emerges here. It will be interesting to read the next Woodward tome about this Obama White House, sans Emanuel, Jones, Gates, and others who will surely drop by the wayside. It will be especially telling to see the shape of the White House with a different chief of staff.

One thing is certain from previous Woodward books: Woodward will not provide a conclusive answer. The reader must hear all the involved voices and come to his or her own conclusion.

Obama’s Wars is American History in the making.