Deadly Spin: An Insurance Company Insider Speaks Out on How Corporate PR Is Killing Health Care and Deceiving Americans 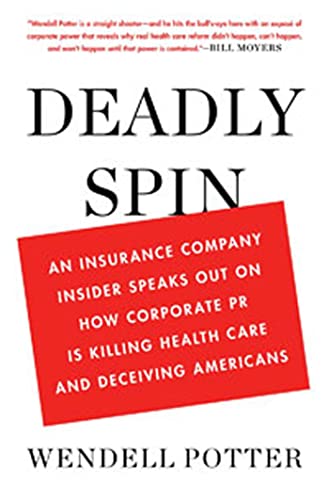 Wendell Potter, the author of Deadly Spin, is a former head of public relations at CIGNA; Potter was one of those “spin-meisters.” In the position at CIGNA, Potter’s job was to create and perpetuate myths that any law passed by Congress was a “government takeover of the health care system.”

Terms that are aimed at striking fear into the hearts of Americans are “socialized medicine” and “Obamacare.” The mid-term elections proved that the job that Wendell Potter performed in his 20 years as a PR executive for the health care industry, was effective.

Potter left his position in May of 2008 and in 2009 became an advocate for health care reform. On June 24, 2009, Potter testified before The Senate Commerce, Science, and Transportation Committee chaired by Senator Jay Rockefeller (D-WV). Potter’s whistle-blowing congressional testimony made a big splash because one of their own (insurance industry) testified, which led to more testimony before Congressional Committees, and appearing at press conferences with House leaders including Speaker Nancy Pelosi. He met with dozens of Congressmen and members of Congressional staffs and became a celebrity, advocating for changes in the laws governing insurance companies.

This book is just as much the story of Wendell Potter’s transformation from health care industry insider to consumer advocate, as it is the story of the passing of the PPACA and the public relations challenge of making the PPACA understandable for most Americans.

President Obama discussed on “60 Minutes” on Sunday, November 6, 2010, the political cost of passing PPACA and the problem with the message coming out of the Administration. It is simply because people like Wendell Potter were effective at their jobs by labeling the law as “socialized medicine.”

That is far from the truth, Potter explains.

What are some of the things that PPACA accomplish immediately?

1. The law makes it illegal to deny coverage based on pre-existing conditions for children.

2. Coverage for children up to 26 years old on their parents’ policy

4. Lifts the lifetime maximum benefit on insurance plans. The yearly maximum is $1 million, and the lifetime cap is lifted. Later, the yearly cap will be eliminated.

Among the provisions taking effect starting January 1, 2011, 80 to 85% of premiums collected must go toward health care (and not administration), and if not, those premiums must be rebated to the consumer. These are the type of provisions that the insurance industry does not want you to know about and would lobby their newfound friends in Congress to repeal provisions and “not replace.”

Not only does Potter explain the new law, he also goes into the history of health care reform. President Theodore Roosevelt discussed the issue in 1906 when he was President. When Roosevelt ran on the Progressive Party ticket in 1912, it became a part of his platform. The idea of proposing health care reform into law started in 1945 with President Harry Truman who was one of the first real advocates for universal health care. Truman actually proposed health care into bills before the House and the Senate that year.

In 1946, Truman suffered one of the worst mid-term defeats in American history as Republicans successfully labeled him as a “socialist” for advocating for health care reform, among other issues. Truman lost control of Congress during the 1946 midterms. In 1948, Truman not only won back the Congress, but also surprised all the experts and won reelection himself against Thomas Dewey. Potter quotes Truman from his memoir in recalling that period where the Republican 80th Congress thwarted his efforts at health care reform.

“I cautioned Congress against being frightened away from health insurance by the scare words “socialized medicine,” which some people were bandying about.” I wanted no part of socialized medicine, and I knew the American people did not,” Truman wrote in his memoirs. “I have had stormy times as President and have engaged in some vigorous controversies. Democracy thrives on debate and political differences. But I had no patience with the reactionary selfish people and politicians who fought year after year every proposal we made to improve the people’s health.”

How this applies to today: Truman handled most of his own messaging. He eventually gained momentum in office and crowds would approve of his tactics by cheering, “Give ’em hell, Harry.”

Potter traces the path from the Truman years through the LBJ years culminating in the passage of Medicare, then through Richard Nixon’s Presidency and Clinton’s battle for reform. Then the final passage by President Obama in 2010 of PPACA. The common thread is the public relations onslaught each time change was proposed.

Deadly Spin is a must-read for all who want to learn more about what PPACA is and what it is not. It is a handbook for social change, and the backstory is how effective messaging can result in social change. It exposes the public relation techniques used by the insurance industry to advance excessive profits in the insurance business.

The new law (PPACA) is an incremental change in health care laws. It is more evolutionary than revolutionary—it is most certainly not “socialism” especially since the law as it stands today favors insurance companies because of the mandated requirement that all Americans must be covered by health insurance coverage. This insures that over the next several years, 40 million Americans are mandated by law to carry health insurance.

The assumption was that insurance companies were upset at the passage of the law, but Potter says to the contrary, the insurance industry wrote and influenced many provisions of the law. When they realized they could not torpedo the act and that the political will of President Obama was so strong, they asked for and received a seat at the table so they could influence the law.

The debate will continue and Potter suspects that incremental changes will continue to be made to PPACA. The powerful insurance lobby that continues to exert influence on our lawmakers will again influence changes. The Republicans especially, are in the pockets of the insurance industry and all are anxious to do the bidding of the insurance industry by attempting to dismantle the heath care law. There is already talk of such things as “repeal and replace.”

It remains to be seen if the newly-elected 112th Congress is a “do-nothing” Congress, focusing on repealing parts or all of PPACA and losing sight of the real mission they were elected to achieve: jobs. If they do, history may repeat itself and the cheer will be, “Give ’em hell, Barack.”