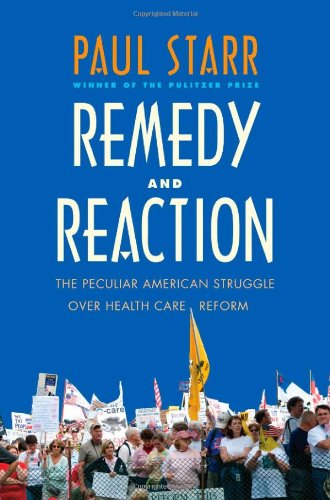 “Regardless of the results of the legislative challenges and the court fights, Remedy and Reaction elevates our understanding of the historical picture of the health care debate.”

Remedy and Reaction: The Peculiar American Struggle over Health Care Reform by Paul Starr is a definitive history of health care reform in America.

The introductory and the final chapter discuss health care reform and specifically delve into the evolution of the current law: the Patient Protection and Affordable Care Act (PPACA). The author discusses the passage of the PPACA and the attempts by the Republicans and the Tea Party to jettison the legislation through Congress, the states, and the courts.

Paul Starr describes the journey to the passage of PPACA in March of 2010. This is a valuable handbook for how we got to PPACA and where will go from here. What are the chances that the legislation will be derailed in the coming months?

The majority of the book takes us on a walk through American history.

In 1883 European countries had already adopted some type of health care for the populist. Countries like Germany adopted sickness insurance. Britain also had reform in response to the growing socialist movements in Europe at the time.

Influenced by Europe, Theodore Roosevelt ran for the presidency in 1912 as a Progressive Party candidate, which included comprehensive health care reform, which was the year after Britain had passed the National Insurance Act. Roosevelt lost his bid for a third term and with that healthcare reform died, too. By 1916, discussion of health insurance completely evaporated and World War I absorbed much of the national energy.

Discussion was revived during the New Deal era, but the legislation fell short during Roosevelt’s twelve years in office. Some believe that the issue didn’t quite “grab” President Franklin Roosevelt. Admittedly, Franklin Roosevelt’s plate was quite full with SSA, WPA, and reviving the economy—just a few of the initiatives he pursued during the New Deal Era.

Energy was restored to the debate during the Truman years. He ran in 1948 against a do-nothing Congress and won. A bill nearly passed in 1949, but the American Medical Association (AMA) thwarted passage of the bill with intense lobbying and giving the bill the label of “socialized medicine.”

The debate continued through the Eisenhower Administration, the most notable change during those years was the addition of disability insurance to the social security laws. Many incremental changes occurred after the Eisenhower Administration. One of the results of this intense lobbying for reform was the growth of employer-paid insurance plans, which started in 1950 and continue to this day.

JFK considered some legislation, but could not get it passed in Congress. It was after JFK’s assassination that LBJ took health care to another level with the passage of Medicare and Medicaid.

It is surprising to learn that President Richard M. Nixon had proposed comprehensive health care reform. The bill Nixon proposed is much more liberal and comprehensive than PPACA, but the plan was derailed by the Watergate scandal.

President Gerald Ford did not attempt to push comprehensive health care because the Ford Administration made as one of its goals to control inflation and they felt that passage of a law would exacerbate inflation.

The Carter Administration also attempted to address the issue, but intra party politics got in the way as President Jimmy Carter and Senator Ted Kennedy feuded about the approach to health care. Kennedy wanted universal coverage immediately and Carter wanted incremental change. This directly led to Kennedy’s 1980 challenge of Jimmy Carter for the Democratic nomination and the bad feelings between the two men were taken to Kennedy’s grave.

The Reagan years brought a threat from Reagan to cut Medicare benefits and the question of expanding health care coverage for all Americans was unlikely during those years. Surprisingly, Reagan ended up expanding Medicare benefits by the time he left office.

Change came when Bill Clinton was elected President in 1992 and his administration hit the ground running. Clinton was committed to fight for expanded health coverage for all Americans. His wife, then First Lady Hilary Clinton, was the point person in the administration for health care. The author, Paul Starr, was part of the administration and gained his expertise in this area during those years.

Paul Starr neatly ties together the impact of the Clinton fight for reform, the influence of that fight on the 2008 election, and how it became a major campaign issue.

Regardless of the results of the legislative challenges and the court fights, Remedy and Reaction elevates our understanding of the historical picture of the health care debate. The issue will be in court in the summer of 2012 and that will surely have an impact as to which candidate will get elected to the Presidency on November 6, 2012.