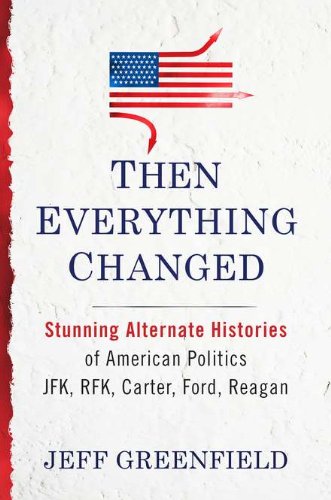 Then Everything Changed by Jeff Greenfield is an ambitious book that takes three important pieces of recent American presidential history and simply changes them. Greenfield changes these select moments and then asks the question: “What would have happened if?” All three pieces are based on a small fact that he has changed to jumpstart these “could have been” scenarios.

The book is at times painful, joyful, or entertaining, but at all times remains a plausible journalistic tour through what could have been.

The first changed incident is the long-forgotten story of a suicide bomber, Richard Pavlick, waiting for President-elect John F. Kennedy, in December of 1960, as he leaves the Kennedy compound in Florida, wife and child in tow. In the real story, when the president-elect is leaving the compound, Pavlick changes his mind about murdering J.F.K. because he did not want to murder the president in front of his wife and daughter.

“What if” J.F.K. had come out without his wife and daughter and Pavlick had gone through with the terrorist act? J.F.K. would have been killed? Would the electoral college have elected L.B.J. president? How would Richard M. Nixon have responded? Would Nixon have made a legitimate claim to the presidency, since he could have argued voter fraud, as Mr. Greenfield writes in his scenario? Could Nixon have made that case to the electoral college?

What would be the personal responses of the other characters involved? How would Bobby Kennedy have responded? Bobby would have called him “Lyndon” in this scenario and not “Mr. President,” a scenario we can imagine Bobby Kennedy doing. In addition, would Bobby have accepted the position of attorney general since J.F.K. had already announced? Or would Bobby Kennedy possibly have run for vice president? Was Bobby even of the constitutionally required age at that point?

Moreover, who should have been the vice president? At this point in American history, there was not a 25th Amendment to the U.S. Constitution, which laid out a succession plan in the event of the death of a president. That amendment would not occur until 1967.

Since the electoral college would be electing a new president, it would also have named a vice president. But whom? Would it have been Hubert Humphrey? Would Bobby run for United States Senate from Massachusetts and succeed his brother John?

You get the idea.

The next Then Everything Changed scenario concerns Bobby Kennedy again. In 1968, after Kennedy had won the 1968 California primary, he went into the kitchen of the Ambassador Hotel and was shot and killed by Sirhan Sirhan. “What if” Bobby had taken a different path and not walked through the kitchen? As Bobby had said in his speech that night, “and on to Chicago.” If he had taken that different path (as was originally planned), who would have won the presidential nomination for the Democrats at the Democratic convention in Chicago? In this scenario, Steve Smith, Kennedy’s brother-in-law, runs into Sirhan Sirhan and stops him from killing anybody:

“And Steve Smith, standing behind Kennedy, strode in front of them, looking to clear the way, which is why he glimpsed the fury in the eyes of a short, dark-haired man who suddenly jumped down from a low-rise tray stacker and rushed toward the Senator, screaming, “You son of a bitch!” Smith, who played in so many of those rough-and-tumble touch football games on the Cape, threw himself at the attacker, who was knocked to the floor just as he fired one shot from his revolver. The bullet grazed Smith’s shoulder. By then, Roosevelt Grier and Rafer Johnson had pinned the attacker against the wall, immobilizing his shooting hand, while a half a dozen people surrounded Robert Kennedy, puling him and Ethel to safety.”

And what would have happened in Chicago at the Democratic convention in 1968? Senator Eugene McCarthy had garnered a great deal of support. Hubert Humphrey was the vice president and had great support from the party leadership. Which candidate would Mayor Richard J. Daley of Chicago have supported? The “what if” scenario here gets complicated, and L.B.J. changes his mind and decides to reclaim the nomination—briefly.

This portion of the book, where Bobby Kennedy avoids assassination in June of 1968, is the most intriguing. The details of the 1968 Democratic convention that Greenfield chronicles are rich with historical detail. And his vision of the inauguration in 1969 is a compelling and interesting read.

The last part of the Then Everything Changed presents a slightly different scenario and is devoid of violence. It involves a slip of the tongue. In October 1976, President Gerald R. Ford, in debating former Governor Jimmy Carter, made a gaffe that many historians believe turned the election in Carter’s favor. President Ford said during that debate, “There is no Soviet domination of Eastern Europe and there never will be under a Ford Administration.”

No Soviet domination of Eastern Europe? Did he really just say that? Stop the presses!

“What if” debate panelist Max Frankel of the New York Times asked President Ford for a clarification, which he gave, and President Ford soon corrected his answer to diminish the controversy. Here is what Frankel actually said. “Did I understand you to say, sir, that the Russians are not using Eastern Europe as their own sphere of influence and occupying most of the countries there and making sure with their troops that it’s a Communist zone?”

What if President Ford had defeated Jimmy Carter in 1976? You may recall that Gerald Ford had beaten back a challenge from Ronald Reagan that same year. Where would that have placed Ronald Reagan in American history? Would Reagan have been the nominee in 1980 and redirected the conservative movement? Great questions are raised in Then Everything Changed.

It is clear that Mr. Greenfield knows his American contemporary history. He takes into consideration many facts that are known about J.F.K., R.F.K., Carter, Ford, and Reagan and melds them into his scenarios with all their personal strengths and flaws intact. His three “what if” stories are riveting and well formulated.

Then Everything Changed is not just a fun romp into a “what if” version of American history. It is fun. But it is also a serious work in which historians and politicians can learn much about political events and the pitfalls of politics. Only a journalist of Jeff Greenfield’s stature could pull off this great masterpiece and paint a fascinating portrait of American history based on “what if?” scenarios.