Cowboy Conservatism: Texas and the Rise of the Modern Right (New Directions In Southern History) 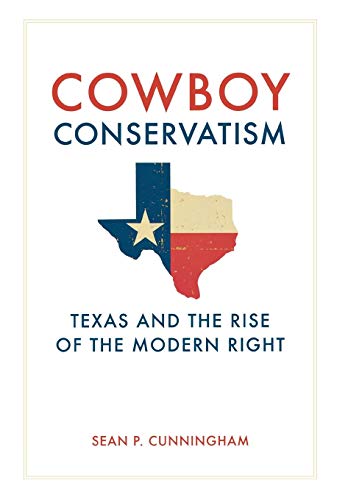 Cowboy Conservatism is an illuminating history of modern conservatism in the state of Texas—a conservatism that spread throughout the United States, but that began with a bullet that took the life of President John F. Kennedy on November 22, 1963.

Author Sean Cunningham takes us through the election of LBJ in 1964 and LBJ’s overwhelming victory in Texas over Arizona Senator Barry Goldwater. The journey continues through the narrow victory of Richard Nixon in 1968, Nixon’s landslide victory in 1972, and the presidential primary fight in 1976 between Gerald Ford and Ronald Reagan. While Gerald Ford won the Republican nomination in 1976, Ronald Reagan not only won the Texas Republican primary, but also set the stage for Reagan’s resounding victory in 1980 and the rise of modern conservatism.

Many political junkies know the facts from the period between 1963 and 1980, but Sean Cunningham puts it all together in an easy-to-read and easy-to-follow format. This is a must-read for all conservatives to learn how modern conservatism rose in the United States political scene, but it also a must-read for liberals who are interested in history.

The book is written from the perspective of the state of Texas. It draws a vivid picture of how Texas went from a strongly Democratic state prior to 1963 to what it is today: a strongly conservative Republican state.

The events leading to the assassination of President John F. Kennedy are fascinating because of the purpose of the trip. Kennedy went to Texas to settle a political dispute between Senator Ralph Yarborough and Governor John Connally, both Democrats and powerful ones during that time. Yarborough was a progressive Democrat who supported Civil Rights legislation dating back to the 1950s. Yarborough also supported and authored much of LBJ’s Great Society legislation, including Medicare, Medicaid, and fighting the “War on Poverty.” It was Yarborough who used the slogan in his political campaigns, “Let’s put the jam on the lower shelf so the little people can reach it.”

John Connally was a conservative Democrat and later switched political parties. Connally also served in the Nixon administration and was seriously considered for the vice presidency by Nixon.

The narrative of the book is gripping and compelling as Cunningham takes us through the race in 1964 between LBJ and Goldwater. He discusses the perspective of many Texans: that they were sympathetic to Goldwater’s views, but they harbored a feeling of loyalty toward LBJ because he was a Texan. As well, LBJ successfully painted Goldwater as an extremist, using scare tactics to turn people against his competitor. It worked.

We are also introduced to other important Texans in the conservative movement, such as Congressman Bruce Alger, who once lost a vote in the House of Representatives by 378:1 on legislation that would have provided free milk to elementary school children. Alger, Cunningham argues, never introduced or passed a single piece of important legislation, but was a key figure in the rise of modern conservatism. Although Alger lost his reelection bid in 1964 to former Dallas mayor Earle Cabell, Alger remained an influence in Texas politics for many years. Cunningham discusses many of these types of figures, including Texas Senator John Tower, an early player in the modern conservative movement.

Even after Reagan’s defeat in the 1976 presidential primary, Reagan continued to campaign for the presidency until he was nominated in 1980. Reagan’s victory in Texas gave him much encouragement regarding his own political strength. Reagan would often visit Texas and gave his anti-Democratic, anti-Jimmy Carter stump speech to the effect of, “I’m not going to present you with a long list of what is wrong with the current administration or the Democratically-controlled Congress. I’d be here all night.” Reagan, in contrast with Goldwater some years earlier, struck just the right tone in winning over conservatives and helping modern conservatism rise. Barry Goldwater scared people. Ronald Reagan did not.

The book ends with the election of Reagan in 1980 and how that changed the political direction of the nation, which had its seeds planted in the state of Texas.

The historical richness of Cowboy Conservatism makes it a worthwhile read. Nowhere in this book does author Sean Cunningham give away his political ideology. Is Cunningham a conservative? Is Cunningham a liberal? Don’t know. The answer doesn’t get in the way of enjoying this book. It is a non-partisan, level evaluation and study about the rise of modern conservatism in the United States. It does what books on history should do. Tell a story.