Blessed Are the Organized: Grassroots Democracy in America 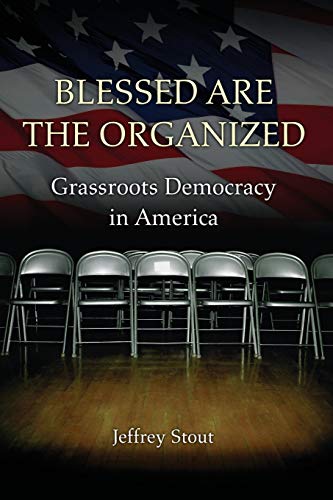 In Blessed Are the Organized: Grassroots Democracy in America, Jeffrey Stout travels throughout America on a journey to find those involved in changing the world in which they live by getting organized.

Much has been made of late about community organizing since the election of President Barack Obama, who started with a small seed to plant, and soon spread like grassroots throughout the country. Simply, Barack Obama organized his way to the presidency. While most of the book is about ordinary citizens making changes in various parts of the country, Jeffrey Stout touches on the Obama campaign experiences before the election and why they were so effective. He also covers how President Obama has used the presidency in trying to mobilize the “grassroots” after the election and why that was not effective.

Changes occur through a democratic process in America, via a bottom-up grassroots democratic style of organizing. Jeffrey Stout uses some excellent examples of ordinary people achieving extraordinary results. Stout makes clear that it is not a sexy or easy way to resolve problems or make change. The process is slow, tedious, detailed, and sometimes clumsy. It takes attention to minute detail as well as a tenacious and relentless spirit to truly achieve the desired result. And most of the changes are as simple as having new signs posted in areas that don’t have them and need them—or as large as stopping gang violence and murder on the streets.

Blessed Are the Organized starts in New Orleans sixteen months after the destructive effects of Hurricane Katrina, and for three chapters Jeffrey Stout explains the workings of an organization called “Jeremiah” which is an umbrella organization for various religious, labor, and non-governmental groups. Jeremiah is an affiliate of the Industrial Areas Foundation (IAF), a confederation of community organizations, was founded in the 1940s by Saul Alinsky. All of the groups that Stout visits in this book are affiliates of the IAF.

In discussing the workings of Jeremiah in New Orleans, Stout focuses on the “house meeting,” that is small groups getting together to discuss problems and issues. The “house meeting” is at the center of the “grassroots democracy,” as seen in New Orleans and other places. Stout discusses the difficulty of the situation in New Orleans before the Hurricane Katrina and how the disaster only exacerbated the situation and made the need for getting organized even more imperative. Rallying the citizenry.

Stout discusses in later chapters the fight in South Central Los Angeles, through a chapter of the IAF, where a fight to change the way vehicles were impounded by police was brought about. And he also explores how these groups tried to overcome gang violence.

Stout also covers the story of a Latino priest north of the Rio Grande who brings his parish into a citizens’ organization, a chapter of the IAF, and the many successes he had through this grassroots democracy. Father Pat Seitz fought for and won concessions from the U.S. Postal service to deliver mail in an area where there were no street signs. Father Seitz also fought to have the street signs put up so the U.S.P.S. could find the homes that were not getting mail delivered. Subsequently, using grassroots democracy, Father Pat also pushed hard for a half-million dollar grant to install sewage pipes where they were needed. It is this bottom-up organizing that Stout claims is the only effective way of making change and forcing big institutions like business and government to respond to the needs of the people.

What do all these stories tell us? Jeffrey Stout repeatedly makes the point that grassroots organizing can only succeed from a bottom-up approach. The seeds of change must come from the roots and rise to the top. It is the people holding accountable the big institutions intruding into their lives and not being accountable for their actions. The last chapter makes a point about the growing imbalance of power between the ordinary citizenry and the institutions that fail to serve the their needs.

Stout gives credit to President Barack Obama as a presidential candidate who won based on a great grassroots movement that sprung from the bottom up. Organizing for America, which now, after the election of President Obama, is a part of the Democratic National Committee, is used to mobilize public opinion on issues at hand. Stout is critical of the way the President uses the OFA in this manner. It is now a top-down organization that does not seek input from the “grassroots” but simply asks the “grassroots” to rubberstamp what has already been decided. Stout blames the loss of the “public option” in the healthcare bill on President Obama because he failed to rally those who were organized and behind his policies for support. By the time his administration sought bottom-up support for the “public option” it was already too late.

I would highly recommend that President Barack Obama read this book to get a better understanding of what happened in the mid-term elections of November 2, 2010. Better yet, pick up the phone and call Dr. Jeffrey Stout. Also recommended is Blessed Are the Organized to the many Democrats who lost their elections. The Republicans and the Tea Party, much to my chagrin, simply “out-organized” and “out-grassrooted” the Democrats. Simply said, the Republicans and the Tea Party approached the elections from the bottom up—and the Democrats came from the top-down.

Blessed Are the Organized has a good chance for mass appeal because of the timeliness and the timelessness of the subject. The book is about the little fighting back in big numbers to get the attention of the powerful. Jeffrey Stout shows how it is done in a number of situations. It works.