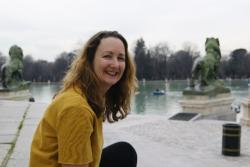 Micah Perks is the author of a book of linked short stories, True Love and Other Dreams of Miraculous Escape out in October 2018 from Outpost19 and the novel What Becomes Us (Outpost19), winner of an Independent Publisher’s Book Award and named one of the Top Ten Books about the Apocalypse by The Guardian.

Her memoir, Pagan Time, tells the story of her childhood in a log cabin on a commune in the Adirondack wilderness. She is also the author of We Are Gathered Here, a novel, and Alone in the Woods, a long personal essay.

Her short stories and essays have appeared in Epoch, Zyzzyva, Tin House, The Toast, OZY, and The Rumpus, among many journals and anthologies. She has won an NEA, five Pushcart Prize nominations, and the New Guard Machigonne 2014 Fiction Prize.

She received her BA and MFA from Cornell University and now lives with her family in Santa Cruz, where she co-directs the creative writing program at UCSC.

True Love and Other Dreams of Miraculous Escape

We Are Gathered Here: A Novel

In the Dream House: A Memoir

“Machado is full of surprises.”

“Funny, romantic, utterly charming, Okay Fine Whatever will particularly appeal to people who suffer from anxiety. In other words, everyone.”

An American Quilt: Unfolding a Story of Family and Slavery

“An American Quilt [is] nothing less than a reexamination of American history through the lens of race, class, and gender.”