An American Quilt: Unfolding a Story of Family and Slavery 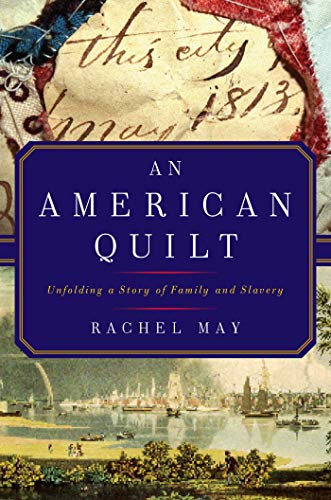 “An American Quilt [is] nothing less than a reexamination of American history through the lens of race, class, and gender.”

It begins with the discovery of an unfinished quilt. At an archive at the University of Rhode Island a metal drawer slides out to reveal a quilt made in 1833 by a newlywed couple in Charleston, Virginia. The author’s colleague says, “It’s the back you’ll want to see.”

The unfinished back still has the hexagonal paper templates sewn in, made from mysterious scraps of documents and letters: “dear sister,” and “signed in the presence of,” “master for,” “friendship,” “friendship.”

Rachel May, quilter and author of the novel, Benedictines, the nonfiction Quilting with a Modern Slant, and a mixed genre book of fables and fabric collages, The Experiments: A Legend in Pictures and Words, is “dazzled,” “entranced.” She longs to unravel the mysteries of the quilt, and imagines the romantic scene in which the newlyweds quilt together by lamp light.

But the story takes a different turn when May begins to read the documentation of a family member from the 1930s. In 1952, Franklin Cushman, family historian, had donated the quilt along with other family documents to the university, including his own research on the origins of the fabrics. May opens Franklins notebook and is startled to read his note about one of the patches in the quilt: “probably for slave gowns.”

This note impels an ambitious, exhaustively researched decade’s long project that stitches together women to men, rich to poor, past to present, north to south, enslaved people to free people. An American Quilt becomes nothing less than a reexamination of American history through the lens of race, class, and gender.

Publisher’s Weekly called May’s book on modern quilting an “encyclopedia,” and that is an apt description of An American Quilt as well. Encyclopedia-like, it is richly illustrated with images of quilts and quilting, of historical photographs of enslaved peoples, of plantations and ships and much more. It includes an encyclopedic wealth of information and description, from May’s experience sleeping overnight in former slave quarters to the dye used in Tutankhamun’s burial (madder root) to the particularly harrowing history of medical abuses of African Americans, such as the advertisements doctors placed in newspapers offering to buy sick enslaved people for medical experiments.

At over 400 pages, An American Quilt is also encyclopedic in length. The first 150 pages are propelled forward by the mystery of the unfinished quilt. Why was it never completed? May builds a complicated, nuanced portrait of Susan and Hassell, the original stitchers of the quilt, a couple apparently deeply in love with each other and their children, struggling to make their way in middle class southern society, and yet, enslavers of four women.

May is particularly troubled by the notion that Susan, a New England northerner like May herself, a woman whose sisters were abolitionists, was so accepting of slavery. May discovers that Susan’s mercantile family moved goods between north to south, a business ultimately based on the slave trade. May’s research challenges the idea that northerners were all against slavery; indeed, it becomes clear to her that the north was as complicit in the slave trade as the south.

In May’s introduction she explains that this is a work of creative nonfiction, and thus she will use her imagination as well as her research to fill in “the gaps and erasures” of the past. Her strongest imaginative writing is in the unfolding of Susan and Hasell’s family tragedy:

“Wake him up! I want to scream as I read the letters. Wake the baby! Wake the baby! . . . This is going to change all of your lives! I holler back into time, or forward—which way does time go, if it’s always circling, overlapping, palimpsesting? It furls off the spool and piles on the floor, or maybe it falls in folds like silk ribbon. See how the silk shines under the light? See how the fibers are woven so tightly that their sheen is almost like gold?” Here, as in many other places in the book, May combines imaginative writing with deeply researched material in powerful passages that highlight the problem of the nonfiction author unable to uncover lost histories and powerless to change the past.

After May reveals why the quilt was left unfinished, the book primarily focuses on the lives of the enslaved women in Susan and Hasell’s household, Juba Simons, Eliza, Minerva, and Jane. May is haunted by the mystery of these women’s lives. Although she dedicates the book to them, she is unable to find out much more about them, and so much of her writing about them is speculative. Here, May’s writing, though deeply respectful, seems more tentative, and these historical women sometimes come across as more wooden, less complicated figures than Susan and Hassell. For example, “Minerva misses the market, where she sees her friends and steals moments of autonomy in the one place that gives her authority.”

May worries about this imaginative project herself: “I wonder, throughout the start of the project, if it’s better to reimagine the women who were enslaved by Susan in the 1830s, or to let them remain undefined for your own imagination to fill, untouched by my hand, which might be clumsy, or an unconscious product of its culture and time.”

While Canadians use the metaphor of a mosaic to describe the diversity of their country, the U.S. has always used the melting pot, a metaphor which erases difference. In An American Quilt, May employs the metaphor of the mosaic quilt to insist both on the vast differences of American experience as well as the way all Americans are complicit in the history of slavery and its legacy up to the present. An important, adventurous read for anyone interested in American history.