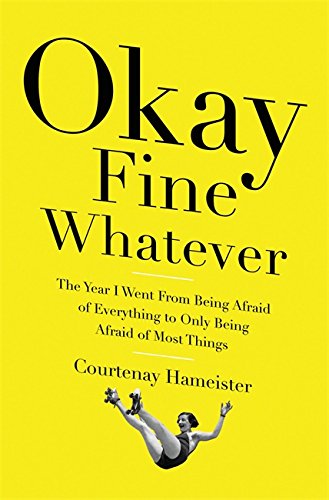 “Funny, romantic, utterly charming, Okay Fine Whatever will particularly appeal to people who suffer from anxiety. In other words, everyone.”

Hameister, former host and head writer of the syndicated Portland based radio show Live Wire! as well as a woman who has lived with a life-long anxiety disorder, decides to spend a year challenging herself to epic adventures. But “when you’re scared of everything, everything is an adventure.” There’s no running with the bulls or juggling knives, but there is smoking weed at work and getting a vagina wax. Okay Fine Whatever is more about “a little embarrassment and discomfort” than it is about putting her life on the line, except perhaps for the danger of dying of embarrassment.

And Hameister is a master of the self-humiliation scene. Unlike comedians like Sacha Baron Cohen who go live primarily to humiliate others, Hameister sets out to embarrass herself, and is always a hundred percent successful.

For example, Hameister, who wasn’t an exerciser and struggles with body shame, challenges herself to join a water aerobics class. Even getting into her bathing suit becomes a hilarious exercise in humiliation: “I spent two frighteningly squirmy minutes with my arms locked over my head in a stretchy black Lycra prison. At one point, I actually became claustrophobic enough that I almost asked a stranger for help. When that seemed too humiliating, I spent a few seconds thinking, Okay. I guess this is where I live now.”

The book originated as a column called “The Reluctant Adventurer,” so many chapters are centered on an activity Hameister dreads doing. After the activity there’s a kind of coda or life lesson learned. This advice section of the book will appeal to fans of Cheryl Strayed’s Dear Sugar column. If some of Hameister’s advice is a bit platitudinous, “as it turns out, some boundaries are good,” more often Hameister twists a comic moment into an authentically poignant one. For instance, at the end of her amusing professional cuddling adventure, she writes: “People who have access to physical affection all the time have no idea the emotional toll it takes on people who don’t.”

Early on in the book Hameister challenges herself to date. Past 40, she has had only two brief romantic relationships, but in the course of her adventure year she goes on enough Tinder dates to fill a spreadsheet. Hameister’s quest for love weaves the book together and and brings it to a satisfying conclusion.

Funny, romantic, utterly charming, Okay Fine Whatever will particularly appeal to people who suffer from anxiety. In other words, everyone.