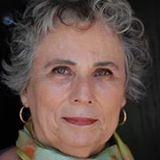 Born and raised in Los Angeles and the San Francisco Bay Area, writer Mary Marks earned a BA in Anthropology from UCLA and an MA in Public Administration from the American Jewish University.

Ms. Marks became an award-winning quilter after her retirement from UCLA administration. Writing about her quilts led her in a new creative direction, writing cozy mysteries. The third novel in the Quilting Mystery series, Gone But Knot Forgotten, will be published in August 2015.

Ms. Marks also contributed a chapter to an anthology based on Jewish mysticism, From Ashes to Healing. She has also been published online and in various newsletters.

Forget Me Knot (A Quilting Mystery)

A group of 70-something friends, determined to check items off their bucket lists, get together one night to skinny dip in the backyard pool.

One Dog Too Many: A Mae December Mystery

Mae December has a thing for dogs. She owns a thriving kennel business in small town Rosedale, Tennessee.

Cherry Tucker just wants to be an artist, but she keeps getting waylaid by people who need her help.

Hex on the Ex (A Mind for Murder Mystery)

“Mignon Ballard has woven a story complicated with both charming and menacing characters.”

“This book will keep the reader turning pages until the very satisfying end.”

“. . . a good story that keeps the reader in suspense until the killer is finally revealed.”

“Duffy Brown has created a delightful world filled with charm and humor and sprinkled with those wonderful Southern metaphors . . .”