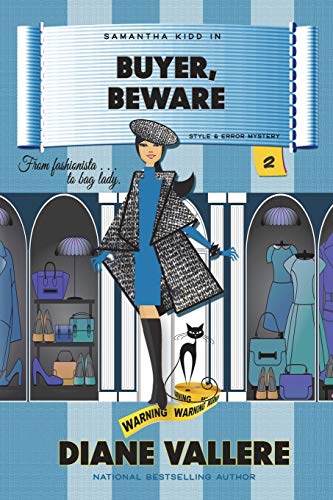 Why would someone give up a fashionista lifestyle and important job as a high fashion shoe buyer in glamorous New York City—a job she loves? Samantha Kidd does just that. When her parents retire to California, she buys the house she grew up in and returns to her hometown in Pennsylvania to find herself. Instead, she fins death, mystery, and danger.

Sam’s out of a job, the man she’s in love with lives in Italy six months out of the year, and the mortgage payment is due. Then she sees an ad for a promotional contest with a prize of ten thousand dollars, enough to keep her afloat for another couple of months. All she has to do is “steal” a statue from an exhibit, bring it to the grand opening of a new clothing chain store, and collect the money.

She enlists her friends Ed and Cat to help her plan the fake heist. Ed will make a copy of the statue, and Sam will make a switch when the guard isn’t looking. But the situation becomes complicated when Cat includes her very handsome and edgy brother Dante, who looks at Samantha with predatory eyes. Unfortunately, Sam can’t keep herself from looking back.

The heist is successful. Sam brings the statue to the grand opening expecting to collect the prize. Instead, she discovers the store’s handbag buyer bludgeoned to death with Ed’s fake statue.

Sam is recruited by the store’s owner to replace the dead buyer and investigate the matter undercover. She wisely contacts the police and agrees to keep them informed of whatever she discovers. When the police make an arrest, Sam thinks they have the wrong person, but can’t get them to look at her evidence. So it’s up to her to find the truth on her own.

Samantha Kidd is a complex young woman with enough self-confidence to wear vintage polyester when everyone else dresses au courant. She also has a head for business. Through Sam we learn how the fascinating word of retail works, including manufacturing, distribution, pricing, and marketing. And her business savvy enables her to unravel the complicated mystery of why various buyers seem to be getting killed over a certain line of designer handbags.

In Buyer Beware, Diane Vallere takes the reader through this cozy mystery with her signature wit and humor. From the first page when our fashionista thinks she’s going to be caught by the man guarding the statue she’s stealing, we find such nuggets as, “If I make it out of here safely, I promise never to wear sweatpants in public.”

Buyer Beware is a fast-paced, humorous read with a clever, knotty mystery to chew on.