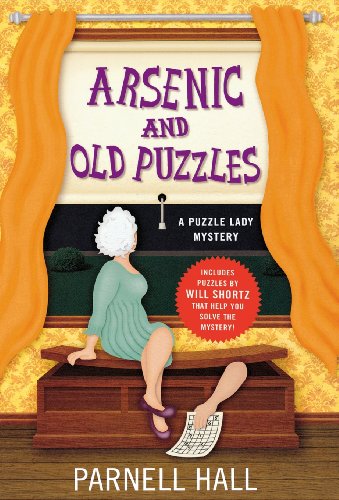 Arsenic and Old Puzzles is Parnell Hall’s latest in a long and successful series of Puzzle Lady mysteries. Actual crossword and Sudoku puzzles are included in the story, and the reader can take a time out to work the crosswords and get clues to the mystery.

Mystery fans love solving puzzles, but stopping to decipher them interrupts the narrative. Fortunately the solutions are printed a few pages later, so the reader is not compelled to solve the puzzle in order to discover the clues.

Mr. Hall’s characters have previous history together and backstories that the reader is assumed to already know. So if Arsenic is the first title in this series for the reader, a lot of nuance will be lost—like a stranger walking in on someone else’s inside joke.

Mr. Hall makes a very risky attempt to adapt the stage and screen versions of Arsenic and Old Lace to the cozy mystery genre. He gets props for courage and innovation. But in the end the book reads like pages from a stage production.
The dialogue is snappy and can be very funny at times, like when the main character Cora Felton is seeking reassurance that she’s still attractive to men. (“You’re young, you’re vibrant, you have a gun in your purse.”)

The problem is, the dialogue is so slick and fast paced it becomes glib. No longer a narrative, the reader experiences something more like: [Alan enters stage right] “Blah blah blah” [Alan and the police exit stage left].

While this format is quite okay for a stage farce, it fails to translate into novel form. What the reader ultimately ends up with are characters with few feelings, thoughts, or reactions.

Mr. Hall draws the main character with great potential for comedy and unique perspective. Cora is a saucy woman of a certain age who admits, “I wear my six-plus marriages on my sleeve like a badge of honor.”

Instead of giving the reader some insight into the how she came to be married so many times, or what kind of person might be proud of such a record, author Hall paints a fairly unsympathetic Cora. She is best described as narcissistic, manipulative, and predatory. And all the other people in the story—including the police and coroner—acquiesce to her manipulations. One briefly wonders how this is possible.

Parnell Hall writes a credible mystery plot, but without anyone to root for or without any real flesh on the main character’s bones, in the end the reader does not really care all that much.